The one about mortality: Requiem for 'Friends' 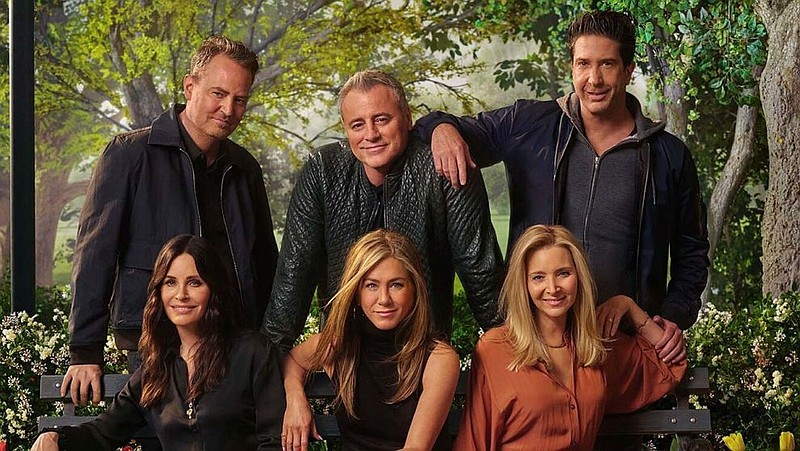 Let me be very clear about this from the outset: I was never a particular fan of "Friends." When the show debuted, in 1994, I was deep into grad school, and spent my free time reading, writing, or lamenting one relationship or another. I only started watching it beyond sporadically toward the end of its run, after I had gotten married and had settled into something resembling domesticity.

That said, it's not like I was ever unaware of the show: Especially, in its first few seasons, it was such a cultural bombshell, its penetration so thorough, it would have been impossible to avoid it entirely. The cast were all in my age cohort, give or take a couple of years, and their living situation, while impossible to fully emulate -- who the hell has their five best friends living in the same building together for a decade? -- was at least thematically on point for me, living outside D.C., earning a degree that would help me not in the slightest with a possible career, and ping-ponging between friendships and relationships in a scatter-shot manner.

By the time I started more regularly watching the show, roughly amid its last two or three seasons, it had already lost its fastball, and by the time the last season rolled uncomfortably off the conveyor belt, it was primarily a hate-watch. What fire the show did have in its belly -- the way it wasn't afraid to mock its protagonists, and prick their fanciful egos with one disaster after another -- had given way to a slog of feel-good bits in which everyone ended up with exactly what they would have wanted in a way that felt treacly and unearned: fan service of the most egregious order.

I have not succumbed to re-watching the series (or in the case of the first batch of seasons, seeing it for the first time), and I'm not terribly interested in its legacy. Or at least I wasn't before. But watching "Friends: The Reunion" now playing on HBO Max, I was emotionally affected in ways I would not have predicted.

Much of the bells and whistles -- guest stars popping up! Trivia questions to answer! Bloopers! -- didn't interest me much, but watching the six members of the ensemble (Jennifer Aniston, Courteney Cox, David Schwimmer, Matthew Perry, Matt LeBlanc and Lisa Kudrow) shuffle into the studio, with the show's original sets meticulously re-created, and greet one another with a kind of weary camaraderie, I felt an odd kinship I hadn't recognized before.

None of the show's characters seemed particularly likable to me, originally, though they each exuded a spikey charm. There was little chance that I would have actually been friends with any of them (not that they let other people into their inner circle very often, another conceit of the show that never made much sense), or have particularly wanted to be. But seeing the actors, now in various stages of aging -- some reasonably well, some significantly manipulated, some, sadly, less so -- their inescapable vulnerability was instantly recognizable.

When they were young, my God, they were a beautiful set of people to gaze upon, but their aging out of their original target demo was one of the few relatable elements of the series, even as it was taking place. As the Friends grew up, they evolved physically and emotionally in ways that were visceral. Over the course of the first couple of seasons, the actors all went from being virtually unknown (as they would have remained, in the case of Perry and Cox, had they stuck with their dreadful looking alternate pilots), to global superstars, and the pressure of this unreal evolution was palpable. How are you meant to act like yourself when millions of women all over the world want to get the haircut you're sporting? How do you order dinner at a restaurant when everyone in the place is copying your distinct cadence for comic effect?

Even the hokey opening credit scene, with the six of them inexplicably dancing in a fountain, capturing their youthful zeal and spangling haircuts, seemed to capture a fleeting time the rest of the show couldn't hope to emulate. "Friends" became self-aware by physical necessity immediately after it became the biggest sitcom in the world, shortly after its first handful of episodes, and there was no returning to the sense of innocence and spontaneity the show's creators -- David Krane, Marta Kauffman, et al., who famously created the show as a reflection of their own experiences growing up in New York in the '80s -- had based the series on in the first place.

There are many reasons fans have continually flocked to the show since it shuttered after a decade-long run -- and, here, I have to say, having bashed that last season for being overly sentimentalized and unrealistic, I fully agree with Krane and Kauffman when they're asked (repeatedly) about bringing it back for more seasons: They have no interest in revisiting it, as it was designed to capture a specific moment in time, when your friends are a proxy for the family you've left, and before you've created a new family for yourself, which it already accomplished -- but, now, at least, I recognize these actors as representatives of my much-ignored Gen-X cohort, and their trials and tribulations, successes and failures, surgeries, recoveries, and stark disappointments, are much closer to my own trevails than they ever were before.

The stark contrast between their sheer physical beauty and crack timing in their heyday, and their slowed-down, vastly more hesitant selves in the present is, at last, something directly relatable. It makes me feel far more protective of them now, as if members of the same dwindling community of people, who thought they would have had things figured out by now, their happy endings enabled and sanctified.

At one point, the special's moderator, James Corden, asking one of a series of clearly pre-programmed questions the cast had all agreed to answer beforehand, queried the actors about how they imagined the fates of their counterparts in the modern day. Not surprisingly, they all had robustly positive visions -- everyone still together, with their own kids in tow, no tragedies, or divorces, or unexpected sickness -- but seeing the actors there, as old and vulnerable as the rest of us, many of their struggles, in love, health, and addiction, well documented in the tabloids, suddenly as aging contemporaries, it was as if we all understood the fairy tale of the show's arc, and the desire to hold onto it in the face of our actual, far less wondrous, existences.

There is, in tragedy and experience, a kind of leveling-out process (why, one assumes, high-school reunions become easier to attend the older you get). Whatever your hopes and aspirations might have been, whatever physical beauty you possessed, gets slowly bled out over the course of your life. Even if you're lucky in your relationships and your career, you suffer like the rest of us with the continued limitations of growing older, the increased burden it places upon you.

If you're luckier still, you have met someone who helps you recognize those things in yourself you need to change, who cares about you enough to share their life with you, and with whom you can grow old and face the absurdity of these challenges together, but still you have to recognize the process, getting aged out of the culture, facing the back-end of your existence, and, if you have any sort of empathy, you see yourself in other peoples' frailties.

Near the end of the special, Cox explains that this sort of gathering of the cast won't ever happen again. They might all still hang out when they get the chance (or, as Perry explained, when they see each other at parties), but never again for public consumption. For a show built on defying transitional maturations for 10 years before succumbing, in the aftermath, it has become an almost perfect encapsulation of the sadness of growing older, and losing touch with what you once were, what your priorities used to be when you were at the top of your game. You were in the penthouse of your life, at one point, and maybe assumed the view would always be that spectacular, instead of moving closer and closer to the basement.

Alas, I was never a twentysomething living in a luxurious Manhattan rent-controlled walk-up with my five besties (instead, for a brief time, I lived in Brooklyn with one friend, and a third roommate who waited tables, snorted drugs on the communal couch, and kept a weight bench in his tiny room). But I am, now, a fiftysomething, who has experienced love, loss, fatherhood, divorce, more love, and a significant health crisis: I am far more like the troupe of "Friends" actors now, in our similarly roughed-up shape, than I ever was before.

The speed with which the cast went from carefree specimens frolicking in an open fountain, to this bedraggled, laden crew of wary veterans, is our own aging process writ large, and to see them now is to recognize how much of our lives we will never get back again. If we're "hashtag blessed," we have other things to carry us through -- partners, or children, or jobs, or pets, or some combination therein -- but we will never again be so charmed as to be young and beautiful, and free, and surrounded by all our favorite people every day.

We might not realize it in the hot moment, but that fragile state of grace turns out to be devastatingly evanescent. It lasts only until our lives get inevitably more complicated, encumbered with new, craggy responsibilities, and we find ourselves making decisions that inexorably lead us away from each other, graduating into something much different, and far, far scarier.