May hiring picks up, but employers struggle to fill jobs 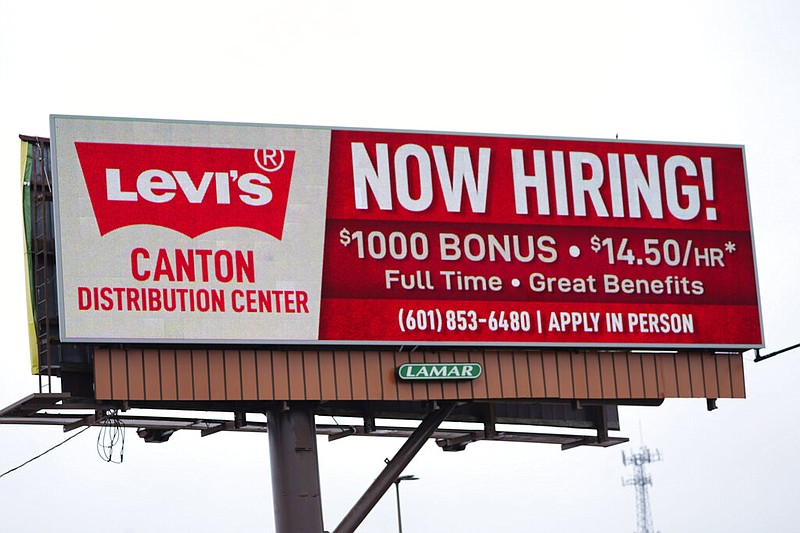 Management at the Levi's Distribution Center in Canton, Miss., are upping the ante by using an electronic display board to advertise openings, a bonus and pay scale on Interstate 55 in northeast Jackson, Miss., in this May 12, 2021, file photo. (AP/Rogelio V. Solis)

The unemployment rate fell to 5.8% from 6.1%, but sidelined workers who stopped looking for work aren't flooding back into the labor market.

The report, which missed expectations, is the latest indication of the continuing economic pressures facing the White House and policymakers at the Fed, after a lackluster April jobs report. The economy is still down 7.5 million jobs since the pandemic took hold.

The speed of the rebound, fueled by substantial federal aid and rising vaccinations, has created a disconnect between employers and the unemployed: While companies are rushing to add workers immediately, many of the unemployed are still holding back. Some of the jobless likely are seeking better positions than they had before the pandemic triggered widespread layoffs. Or they still lack affordable child care.

Others still worry about contracting the coronavirus or have decided to retire early. And a temporary $300-a-week federal unemployment benefit, on top of regular state jobless aid, likely has led many unemployed Americans to take time to consider their options.

That mismatch between employers and job seekers resulted in the sharp slowdown in hiring in April, when businesses added far fewer jobs than economists had forecast and many fewer than had been hired in March. The disconnect eased somewhat in May. But economists say it likely will persist until early fall, when schools reopen, the pandemic fades further and federal unemployment benefits end.

"There is a gap between the economy and labor market," said Nela Richardson, chief economist at the payroll processing firm ADP. May's job gains, she said, are "more lackluster than one would expect given the strong state of economic growth."

The big red flag in the jobs report was that the labor force participation rate ticked down to 61.6%. Despite the government spending, it's essentially unchanged from where it was last summer and down from 63.3% before the coronavirus struck 14 months ago. The lower participation rate means that a healing economy is not encouraging enough people to find work.

[Video not showing up above? Click here to watch » https://www.youtube.com/watch?v=1SurkxmWS5A]

The May jobs report offered a number of signs that companies are trying harder to find workers. Employers are offering more money, for one thing. Average hourly pay jumped for a second-straight month, especially in the leisure and hospitality industry, which includes restaurants, bars, hotels and amusement parks. Hourly wages for all workers in that industry, except managers, were 6.4% higher in May compared with pre-pandemic levels -- a substantial gain.

And the number of unemployed who say their jobs are permanently lost declined in May by the most in five months. That's an encouraging sign that companies are going beyond just recalling workers they had laid off in the pandemic.

Yet many of those jobs are still low-paying and not appealing to many Americans -- people like Marcellus Rowe, who has been unemployed since he lost his $16-an-hour job at the Metropolitan Atlanta Rapid Transit Agency in November 2019.

Rowe, 29, said that the only jobs he sees being advertised for someone like him pay scarcely more than $9 or $10 for work in restaurants and small shops. That isn't enough to cover his $1,000 monthly rent.

"I'm going to continue to look for suitable work," Rowe said. "I know it's going to come eventually. What I cannot do is settle for an unsuitable job that pays low wages."

He's been getting by on unemployment benefits, aided by the $300-a-week federal supplement. But Georgia is eliminating the federal benefit on June 26. Nearly half the states -- all led by Republican governors -- will cut off the extra aid starting this month. Many businesses have blamed the federal benefit for discouraging some of the jobless from taking work.

Eric Winograd, an economist at AllianceBernstein, an investment management firm, said there are still about 7 million people not searching for work -- and so aren't counted as unemployed -- but who say in government surveys that they want a job. That's about 50% higher than before the pandemic.

President Joe Biden hailed Friday's report, calling the numbers "great news," while noting that more than 2 million jobs have been added back to the economy in the first four months of his presidency.

The White House has been on the defensive after April's weaker-than-expected jobs report and fears of rising inflation, as the U.S. economy recovers from pandemic lockdowns.

"Even with dumbed-down jobs expectations based on April's disastrous report, here is another jobs report falling well short of expectations," Rep. Kevin Brady of Texas, the top Republican on the House Ways and Means Committee, said in a statement. "Long-term unemployment is higher than when the pandemic started, and labor force participation mirrors the stagnant 1970s."

Information for this article was contributed by Christopher Rugaber, Paul Wiseman, Josh Boak and Anne D'Innocenzio of The Associated Press; by Eli Rosenberg, Andrew Van Dam, Jeff Stein and Alyssa Fowers of The Washington Post; and by Nancy Cook and Mario Parker of Bloomberg News (WPNS).