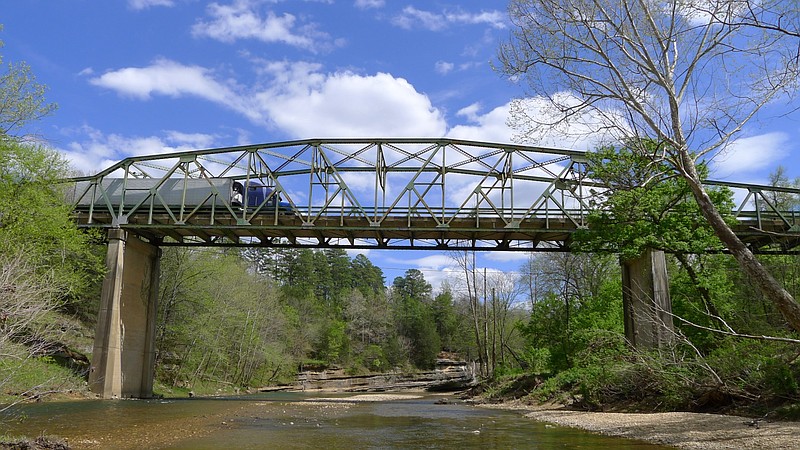 A truck on Scenic Arkansas 7 in rural Newton County drives over the Buffalo National River bridge at Pruitt in this April 14, 2016, file photo. The two-lane Pruitt bridge was built in 1931 and, before its scheduled destruction in June 2021, was the last Pennsylvania through-truss bridge remaining in Arkansas. (Arkansas Democrat-Gazette/Bill Bowden)

The old Pruitt bridge will be demolished Wednesday.

For 90 years, the two-lane Pruitt bridge carried traffic over the Buffalo River on Scenic Arkansas 7 in rural Newton County. It's the last Pennsylvania through-truss bridge remaining in Arkansas.

On May 14, a new bridge opened 200 feet to the west, providing things the old bridge didn't have: wider lanes, shoulders, a protected sidewalk and a horse trail underneath.

Steve Lawrence, district engineer with the Arkansas Department of Transportation, said Arkansas 7 will be closed in the vicinity during the demolition, which most likely will take place Wednesday morning.

Lawrence said explosives will be used to bring down the old bridge.

"Hopefully, it won't be very long," he said.

"Due to the geography of the area, there will be no staging area from which the public can safely view the demolition," wrote Cassie Branstetter, a spokeswoman for the Buffalo National River, in a news release.

During the preparation and blasting portions of the demolition on Wednesday, access to the Buffalo River and the trails and roads within the safety perimeter will be prohibited, according to the news release.

"Vehicle traffic on Highway 7, County Roads 80 and Pruitt-Yardell will be impacted for approximately one hour during the blasting portion of the demolition," wrote Branstetter.

Boat traffic on the river could be closed within the safety perimeter for up to 24 hours, according to the news release.

The temporary closure will include a 2-mile section of the river from the Ozark access to below the Lower Pruitt access.

During the closure, visitors traveling by boat on the upper sections of the river will be required to exit at the Ozark access to prevent them from entering the demolition area, wrote Branstetter. They can put boats back in the river at Hasty or the Lower Pruitt access after the blasting portion of the demolition has occurred.

After the demolition, the area will be swept and reviewed for safety concerns.

"When cleared, trails, roads and the Lower Pruitt river access will be opened to traffic," wrote Branstetter. "Bridge debris will be captured on prepared temporary structures above the river."

Crouse Construction Co. of Harrison was the contractor that built the new bridge and is demolishing the old bridge, said Lawrence.

These delays and closures may be extended to maintain public safety, according to the news release.

Newton County Sheriff Glenn Wheeler and Crouse Construction Co. collaborated to preserve sections of the bridge for public viewing at Bradley Park in Jasper, according to the news release.

"It's got such a long history in the area," said Wheeler. "It was completed in 1931. Generations of Newton Countians and visitors to Newton County have passed over it and swam under it. It's just been such a landmark to our residents."

Initial dismantling of the old bridge indicated it was in worse shape than people thought, said Wheeler.

Regarding the design of the old Pruitt bridge, Dave Parker, a spokesman for the Arkansas Department of Transportation, said in an email: "The Buffalo River (Pruitt) bridge truss design is a variant of a Pennsylvania through-truss with Warren pony trusses on either side. The through-truss connection to the pony trusses displays a unique design; it has not been identified to date in any other bridges. The Buffalo River (Pruitt) bridge is also the last variation of the Pennsylvania though truss design in service on Arkansas roadways."