Manchin signals 'no' on overhaul of elections 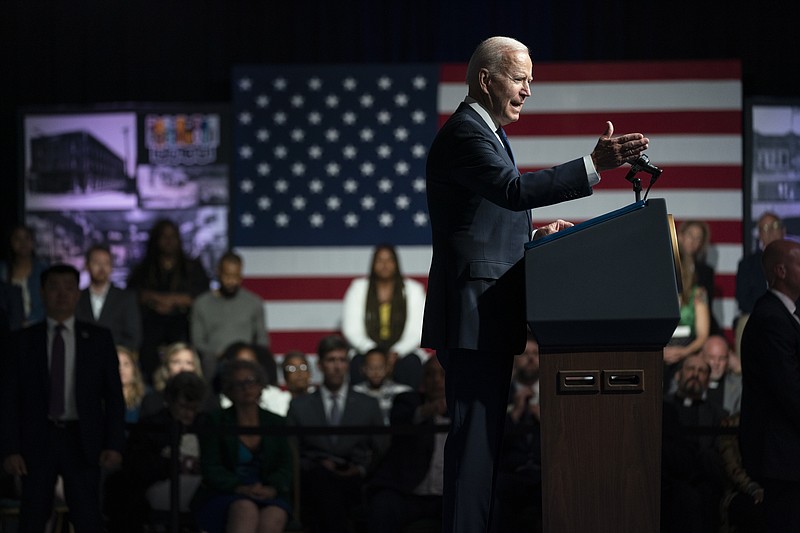 WASHINGTON -- A key Democratic senator said Sunday that he will not vote for the largest overhaul of U.S. election law in at least a generation, leaving no plausible path forward for legislation that his party and the White House have portrayed as crucial for protecting access to the ballot.

"Voting and election reform that is done in a partisan manner will all but ensure partisan divisions continue to deepen," Sen. Joe Manchin of West Virginia wrote in a home-state newspaper, the Charleston Gazette-Mail.

He wrote that failure to bring together both parties on voting legislation would "risk further dividing and destroying the republic we swore to protect and defend as elected officials."

[Video not showing up above? Click here to watch » https://www.youtube.com/watch?v=6S-FnpL6xag]

The bill, the For the People Act, would roll back dozens of laws being passed by Republican state legislatures, many inspired by former President Donald Trump's claims of fraud in his 2020 election loss. It would restrict partisan gerrymandering of congressional districts, strike down hurdles to voting and bring transparency to a murky campaign finance system.

Among dozens of other provisions, it would require states to offer 15 days of early voting and allow no-excuse absentee balloting.

The legislation would also force major-party candidates for president and vice president to release 10 years' worth of personal and business tax returns and end their exemption from executive branch conflict-of-interest rules.

Manchin has made similar points before, but doing it in writing in West Virginia carried new weight.

"His fidelity and allegiance to the people of West Virginia is beyond question," Sen. Richard Blumenthal, D-Conn., said Sunday. "But I hope that he will recognize equally the responsibility that each of us has to the nation, and we face an unprecedented threat to voting rights and democracy."

Senate Majority Leader Charles Schumer, D-N.Y., has pledged to bring the election bill to a vote the week of June 21, testing where senators stand. But without Manchin's support, the bill has no chance of advancing. Republicans are united against it.

In appearances on "Fox News Sunday" and "Face the Nation" on CBS, Manchin stressed his reasons for opposing the bill, including his view that it is too broad.

"I think it's the wrong piece of legislation to bring our country together and unite our country, and I'm not supporting that because I think it would divide us further," Manchin said. He also said he believes Republicans will see the need for a bipartisan deal.

Manchin said lawmakers should instead focus their energies on revitalizing the landmark Voting Rights Act, which was weakened by a U.S. Supreme Court decision in 2013.

The John Lewis Voting Rights Advancement Act would restore federal oversight over state-level voting law changes to protect minority groups that might be targeted. Manchin cited one Republican, Sen. Lisa Murkowski of Alaska, as a supporter of the measure -- but he is still far short of the 60-vote threshold he backs to pass even that bill.

"I continue to engage with my Republican and Democratic colleagues about the value of the John Lewis Voting Rights Advancement Act and I am encouraged by the desire from both sides to transcend partisan politics and strengthen our democracy by protecting voting rights," Manchin wrote.

Manchin's opposition to the broader elections bill is just the latest challenge facing Democrats as they debate how to deliver on their promises to voters.

Manchin reiterated that he would not vote to "weaken or eliminate the filibuster," a route that many Democrats see as the only realistic path forward. The filibuster rule requires 60 votes to pass most bills, and in today's Senate, which is split 50-50, that means many of the Democrats' biggest priorities, from voting rights to gun control, are dead on arrival.

Manchin and Sen. Kyrsten Sinema, D-Ariz., have frustrated their party with their defense of the filibuster. But they aren't alone, with as many as 10 Democratic senators reluctant to change the rules.

President Joe Biden last week used the 100th anniversary of the Tulsa race massacre to make a plea for legislation to protect the right to vote. Biden also seemed to call out Manchin and Sinema for stalling action on voting measures, though he has not said he wants to end the filibuster.

Biden said the right to vote was "precious" and must be protected, and pledged that June would be a "month of action" on Capitol Hill. "We're not giving up" on the elections bill, Biden said. "I'm going to fight like heck with every tool at my disposal for its passage."

Senate Republican leader Mitch McConnell of Kentucky has promised to block the bill, which he characterizes as undue government overreach into state election systems. He said no GOP senators support it.

"I believe that partisan voting legislation will destroy the already weakening binds of our democracy, and for that reason, I will vote against the For the People Act," Manchin wrote. "Furthermore, I will not vote to weaken or eliminate the filibuster."

In March, House Democrats passed the voting bill by a near-party-line 220-210 vote. It has been a priority for Democrats since they won their House majority in 2018, but it has taken on added urgency in the wake of Trump's claims about the 2020 election, which incited the Jan. 6 riot at the Capitol.

Manchin's opposition to ending the filibuster and backing strictly Democratic bills could have implications beyond voting rights.

He supported the pandemic relief bill this year, which passed on party lines, but Democratic leaders are considering passing other measures under reconciliation -- requiring a simple majority rather than 60 votes -- including an infrastructure bill that will most likely top $1 trillion.

Manchin declined to say how he would vote on a party-line infrastructure bill, saying that a bipartisan group of senators negotiating a deal that could get at least 60 votes are "not that far apart."

"I still have all the confidence in the world," Manchin said on "Fox News Sunday." "We're going to get there. My goodness, the president has gone from $2.25 trillion down to $1 trillion. The Republicans have come up quite a bit from where they started."

He also suggested that Senate Democrats were partially responsible for the current dilemma on the filibuster in the Senate, noting that it was the majority leader at the time, Harry Reid of Nevada, who first removed parts of the filibuster in 2013.

"What goes around comes around here; they all understand that," Manchin said. "And there were 33 Democrats in 2017 that signed a letter to 'please save the filibuster and save our democracy.' That's what I'm trying to do."

Democrats pushed back on that suggestion, saying the erosion of support for the filibuster on their side of the aisle stemmed from the abuse of the rule by Republicans. That was capped by a Republican filibuster late last month of a bipartisan commission to investigate the origins and implications of the attack on the Capitol.

Senate Democrats have already had passionate closed meetings about the voting-rights bill, going state by state through restrictions on voting access either enacted already or making their way through Republican-held legislatures.

So far, they have resisted breaking up the For the People Act and passing less partisan measures, such as the ethics provisions meant to block profiteering off the presidency and opening the business interests of presidents and vice presidents to more public scrutiny.

Blumenthal said if Manchin is firm, conversations about legislative strategy will pick up steam.

"We can't let the perfect be the enemy of the good," he said.

"These measures are about ending campaign finance corruption and political self-aggrandizement in a way that is fundamental to preserving our democracy, along with preserving access to the franchise, which is central to our democracy," Blumenthal added.

"Maybe there will be choices ahead, but we need to be very careful about the sacrifices that could be made if we rethink too radically what For the People contains."

Information for this article was contributed by staff members of The Associated Press and by Jonathan Weisman of The New York Times. 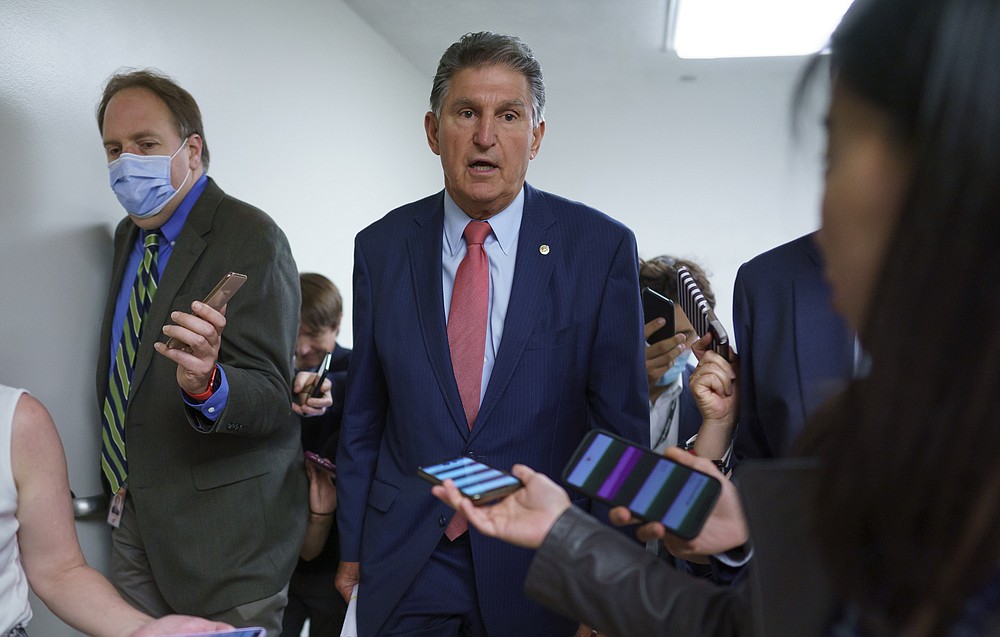 Sen. Joe Manchin, D-W.Va., is surrounded by reporters as senators rush to the chamber for votes ahead of the approaching Memorial Day recess, at the Capitol in Washington, Wednesday, May 26, 2021. Lawmakers still face standoffs on an infrastructure bill, police reform, voting rights, and a bipartisan commission to investigate the Jan. 6 attack on the Capitol. (AP Photo/J. Scott Applewhite) 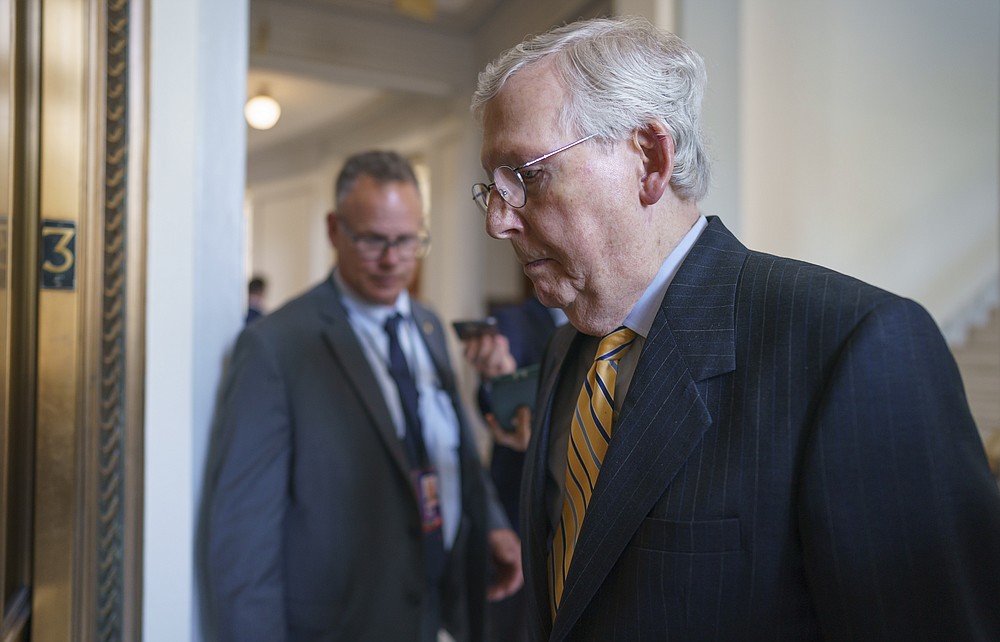 Senate Minority Leader Mitch McConnell, R-Ky., leaves a GOP lunch without speaking to reporters as senators rush to the chamber for votes ahead of the approaching Memorial Day recess, at the Capitol in Washington, Wednesday, May 26, 2021. Lawmakers still face standoffs on an infrastructure bill, police reform, voting rights, and a bipartisan commission to investigate the Jan. 6 attack on the Capitol. (AP Photo/J. Scott Applewhite)
ADVERTISEMENT