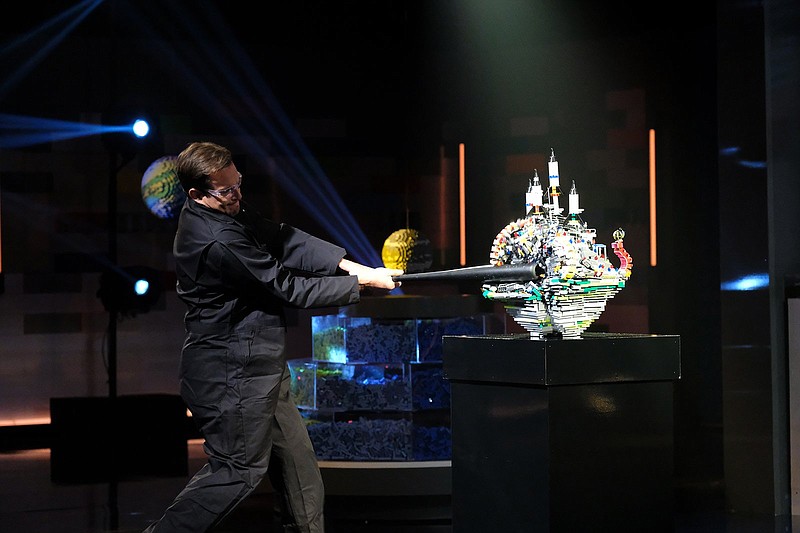 Throw a fully functional teapot in under a minute. Craft a giant bathroom object by melting and sculpting glass. Build a bridge entirely out of Legos that can hold up to a thousand pounds.

These are the challenges contestants could face in HBO Max's "The Great Pottery Throw Down," Netflix's "Blown Away" and Fox's "Lego Masters," respectively — three titles that are part of a burgeoning reality TV subgenre that shines a spotlight on the most specialized of design skills. These shows take the episodic elimination structure of long-established competition series and fill it with people seasoned in the most niche creative fields.

Are you into arts and crafts? Put on NBC's "Making It." Want to watch jewelers at work? Tune into BBC Two's "All That Glitters." No delineation is too detailed: HBO Max's "Full Bloom" focuses more on flower arranging than Netflix's "The Big Flower Fight," which is more about floral installations, and Discovery+'s "Clipped," which is all about topiary. Even kids and teenagers are worthy competitors, thanks to Disney+'s "Shop Class" and HBO Max's "Craftopia."

Why is this kind of show so appealing? To start, they offer a sense of escapism — often an important factor in successful entertainment, never more so about 15 months into a pandemic. "People want to go beyond the wonderful food and home renovation competitions to see what else is out there," said Bob Kirsh, HGTV's vice president of programming and development, whose portfolio includes titles like "Clipped," which boasts Martha Stewart as one of its judges.

"These shows work because there's already some baseline familiarity with the topic, but you get to learn about it from real experts and witness these truly beautiful creations that you may not otherwise be able to see."

Whatever the skill being tested, these shows' shared "it" factor is "extreme creativity," said Jennifer O'Connell, executive vice president, nonfiction and live-action family for HBO Max. "It's satisfying to watch someone be so adept at something that they can make such impressive things. You might not become a potter after watching 'The Great Pottery Throw Down,' but you might be inspired to explore something else and make it your own."

Even if viewers don't literally pick up a craft afterward, "there's been so many studies that show that when we humans observe somebody else doing something, the same neural circuits are activated in our own brains, almost as if we're actually doing it ourselves," explained clinical and forensic neuropsychologist Judy Ho. "Watching somebody else being satisfied from creating something so beautiful, there's a real sense of what that might feel like if we were the ones doing it."

This has become even more true during the widespread uncertainty of the covid-19 pandemic. "Seeing something physical and tangible that you can touch and manipulate into a finished product, especially through a process that has a clear beginning and end, is very soothing to the human mind, which craves control," Ho said.

Such specialized series are nothing new: History's bladesmith competition "Forged in Fire" has aired for eight seasons. SyFy's "Face Off," with prosthetic makeup artists, and Paramount Network's "Ink Master," with tattoo artists, ran for 13 seasons (the latter is being revived for Paramount+).

But more and more, these shows have come to resemble "The Great British Baking Show" rather than "Top Chef," in that they invite amateurs to practice their hobbies instead of bringing on experts to boost their careers. "These contestants are not necessarily trying to make a profit; they're usually doing it because they really do just love it," O'Connell said.

"It shows that, whatever your job is, you can still find something that allows you to express yourself and brings you joy. You can be passionate about an art form or a skill and compete at a really high level. There's a really aspirational element to seeing real, regular people pull it off week after week."

It's fitting that these hobby-centric shows take a relatively relaxed approach compared to TV's more cutthroat tournaments. "This kind of show doesn't have to be mean to be entertaining," said "Lego Masters" showrunner Anthony Dominici.

"Yes, they're technically against each other, but really, these people — who are all so different and from completely different backgrounds — are also helping each other and learning from each other along the way because they see each other as part of the same niche community.

"People can compete against each other and not cut each other down in that process and instead build each other up," he added. "We can all learn from that."