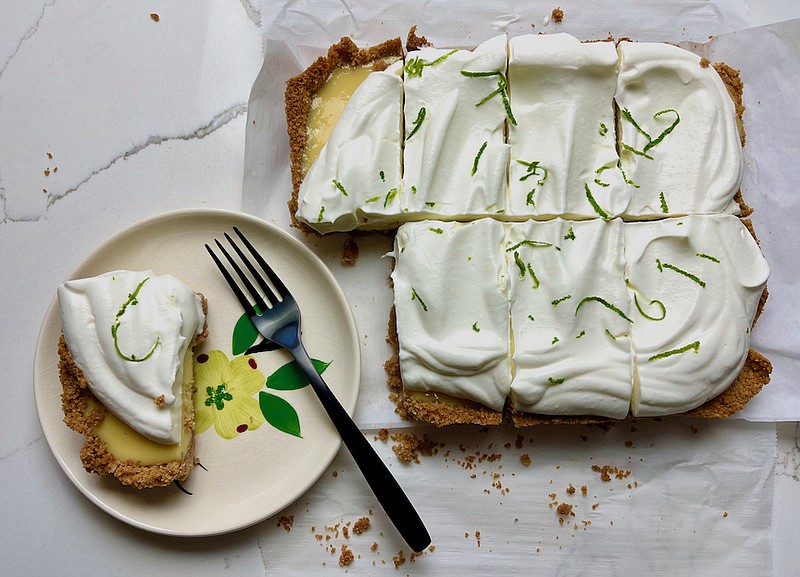 One bite of this cool dessert and you'll feel like you're on a tropical vacation, even if your travel plans take you only as far as the back patio.

The recipe is from "Everyday Entertaining" by Elizabeth Van Lierde (Weldon Owen, to be released in August, $32.50). At first glance (if you ignore the recipe name) it appears to be an ordinary Key lime pie baked as a rectangle and called a tart. But then you see there's rum — in the filling and the whipped cream that's slathered on just before serving.

Van Lierde uses white rum (also known as light and silver) but I opted for gold (also known as amber) because that's what I like to drink and had on hand. Use whichever kind you prefer here. You could even use spiced rum. (For a completely different island vibe try tequila or mezcal.)

For the teetotalers or underage cooks, a teaspoon or two of vanilla extract or rum flavoring would work — though technically those usually contain small amounts of alcohol too.

Van Lierde's recipe calls for using an 8 ½-by-11-inch tart pan. My tart pans are all round, and I wasn't sure which size would work, so I opted to make this in a baking dish lined with parchment paper. I used two pieces of parchment to make sure there was some overhang on all sides, which made it easy to lift the tart from the pan to cut and serve.

[Video not showing up above? Click here to watch: arkansasonline.com/69burner]

In a medium bowl, stir together the graham cracker crumbs, sugar, cinnamon, salt and butter. Press mixture into the bottom and up the sides of the prepared pan.

Bake crust for 10 to 12 minutes or until lightly browned. Remove from oven and set aside while you prepare the filling.

In a large bowl, combine the condensed milk, lime juice, egg yolks and rum and whisk until smooth. Pour mixture into the cooled crust and spread in an even layer. Bake 20 to 25 minutes or until edges are set and the center jiggles slightly. Cool to room temperature and then refrigerate for at least 4 hours before serving.

In a large bowl, combine the heavy cream, rum and sugar and beat on high speed with an electric mixer until stiff peaks form. Spread over chilled tart and sprinkle with lime zest.

Note: Remove the zest from at least one lime before juicing; wrap zest in a damp paper towel, place in an airtight container and refrigerate until ready to use.