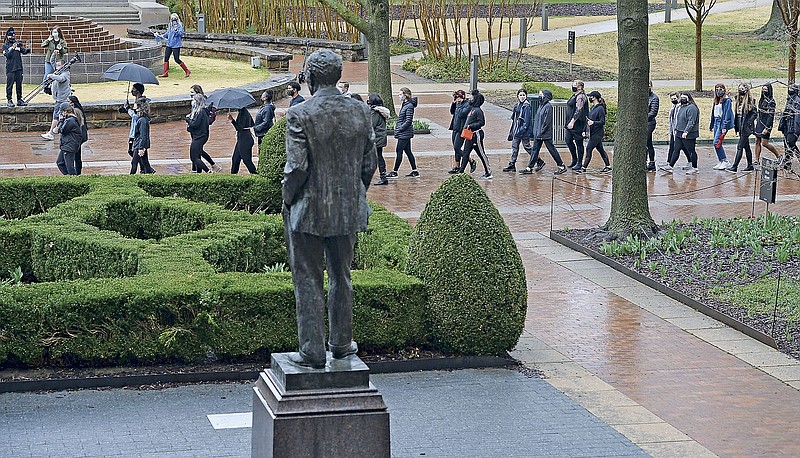 A large group of University of Arkansas students and members of the campus community march Saturday, March 13, 2021, past a statue of J. William Fulbright near Old Main during a rally on the university campus in Fayetteville. Student organizations hosted the anti-racism rally to express support for the campus to disassociate from Fulbright and Charles Brough, two historical figures who have been criticized for stances taken against civil rights and in support of white landowners after racial violence against Black citizens. Visit nwaonline.com/210314Daily/ for today's photo gallery. (NWA Democrat-Gazette/Andy Shupe)

Moving the University of Arkansas' statue of the late Sen. J. William Fulbright would violate the law and could result in a criminal charge, state legislators told university officials Tuesday.

Act 1003 took effect April 28 because of an emergency clause. The law declares moving, damaging or altering a historical monument to be a Class A misdemeanor, which is punishable by up to a year in jail and a $2,500 fine.

The law's definition of a historical monument fits the university's statue of Fulbright, Johnson and other lawmakers said.

Lawmakers criticized Steinmetz's May 19 recommendation to move the statue from its site near the landmark Old Main building on the Fayetteville campus.

Steinmetz mentioned Act 1003 in his recommendation. The act allows a waiver if approved by the state History Commission. Waivers, Johnson said, are allowed only in the act for temporary relocation of a statue for circumstances such as utility repairs in the monument's vicinity or restoration work on the monument.

"This is the law, and we expect it to be followed," Johnson told the two administrators. University leaders -- including board of trustees members who act to remove the statue -- could face criminal charges under the act, he said.

Johnson noted in other parts of the United States activists have called for removing statues of Abraham Lincoln, who emancipated slaves and pushed for the constitutional amendment abolishing slavery.

The state law is designed to prevent overreactions, he said. Future legislators can amend it if they find his act to be too rigid, he added.

Fulbright was a former president of the university; the position of president was later changed to chancellor.

He was first elected to the U.S. House in 1942 and the U.S. Senate in 1944. Legislation he sponsored created the Fulbright Scholarship, a prestigious international program. That scholarship constitutes most of Fulbright's legacy and makes his name and the university famous worldwide, Steinmetz told the lawmakers.

Fulbright also supported segregationist legislation. He helped write and voted for the so-called Southern Manifesto of 1956 to resist court-ordered integration of Black and white students. Accounts such as the CALS Encyclopedia of Arkansas History credit him with tempering the original version of the manifesto, but critics argue his main motivation there was avoiding a split in the Democratic Party over civil rights.

Whatever efforts he took behind the scenes, Fulbright didn't vote in favor of any civil-rights bill until 1970, four years before his 30-year Senate career ended in an election defeat, the Encyclopedia Arkansas notes.

The decision to erect a statue of Fulbright has drawn criticism since before the sculpture was dedicated in 2002, Steinmetz and Bobbitt told lawmakers. Matters came to a head after the murder of George Floyd on May 25, 2020, and the nationwide protests that followed.

Floyd, who was Black, was killed in Minneapolis by a white police officer who knelt upon Floyd's neck for several minutes. A jury in Minnesota convicted the officer of murder on April 20.

Lawmakers said Tuesday that they understood the reaction to Floyd's death, but reacting by erasing markers of historical figures who committed sins, even grievous ones, is a purging of history.

The only statues left would be of Jesus Christ if statues of every flawed human being were removed, Johnson said.

Steinmetz rejected the proposal of his own appointed campus committee to remove the statue and take Fulbright's name off the arts and sciences college, instead recommending to Bobbitt the college retain the name and the statue be moved. He didn't recommend where, only saying the final locale should provide accurate context.

The campus committee of faculty members, staff members, students and alumni voted 15-1, with three absent, to remove the statue and 11-5 to rename the college.

"For many, the statue is a memorial to those segregationist values and a daily reminder to our Black students of that time," the campus committee said in its recommendation to Steinmetz.

The campus committee made its recommendation on the same day Act 1003 was signed into law by Gov. Asa Hutchinson.

Sen. Alan Clark, R-Lonsdale, called the proposal to move the statue and keep the name "hypocritical." The university wants to keep the prestige and fundraising benefits of Fulbright's name while downplaying aspects of his whole history, Clark said.

It isn't hypocritical to put Fulbright's life in context in the perspective given by history, Steinmetz replied.

"Everyone in this room knows the environment in this country changed a year ago," Steinmetz said, referring to Floyd's death and the protests that followed.