3 sources: U.S. to buy vaccine, give it to world 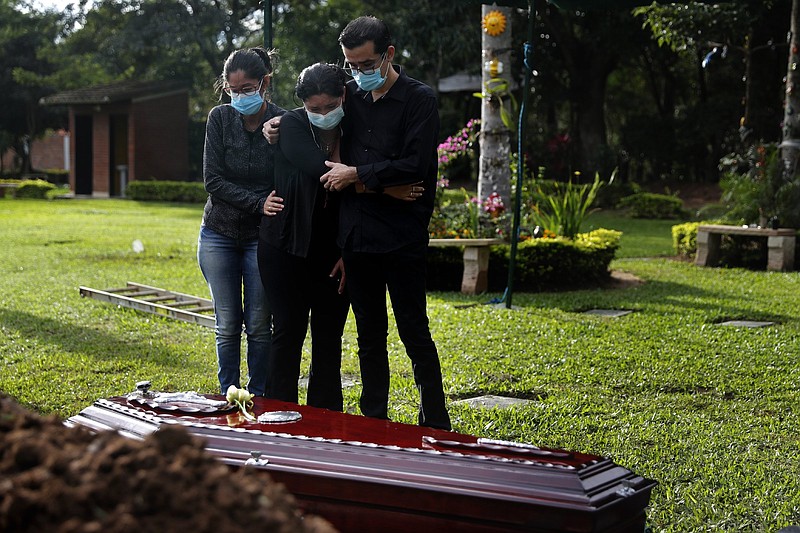 WASHINGTON -- The Biden administration is buying 500 million doses of Pfizer's coronavirus vaccine to donate to the world, as the United States dramatically increases its efforts to help vaccinate the global population, according to three people familiar with the plans.

The first 200 million doses will be distributed this year, with the subsequent 300 million shared in the first half of next year. The doses will be distributed by COVAX, the World Health Organization-backed initiative to share doses around the globe, and they will be targeted at low- and middle-income countries. Pfizer is selling the doses to the U.S. at a "not-for-profit" price, according to the people familiar with the deal.

President Joe Biden is to announce the plan at the Group of Seven meeting in Britain this week amid growing calls for the United States and other rich countries to play a more substantial role in boosting the global supply of coronavirus vaccine. Pfizer Chief Executive Officer Albert Bourla is expected to join Biden in making the announcement.

The White House and Pfizer declined to comment, but the president noted that he would be announcing his global plan as he boarded Air Force One to Britain on Wednesday.

"I have one, and I'll be announcing it," he told reporters.

The question of how to close the vaccine gap and end the pandemic is expected to be front and center at the G-7 summit this week. In the lead-up to the meeting of wealthy democracies, Biden's vaccine-sharing strategy has been under intense scrutiny -- both at home and abroad.

"The president is focused on helping to vaccinate the world because he believes it is the right thing to do; it's what Americans do in times of need," Jake Sullivan, Biden's national security adviser, told reporters aboard Air Force One, while declining to discuss specifics of the president's announcement. "When we have the capacity, then we have the will, and we step up and we deliver. And he said in his joint session that we were the arsenal of democracy in World War II, and we're going to be the arsenal of vaccines over the course of the next period to end this pandemic."

The Biden administration previously announced that it would share at least 80 million vaccine doses with the world by the end of June. Last week, the White House detailed plans for how it would allocate 25 million doses, with about 19 million of them being shared with COVAX. Roughly 6 million shots would be shared directly with countries experiencing severe coronavirus outbreaks, including India.

Congressional Democrats and some health advocates have been calling for the administration to do more. At the same time, Biden's surprise decision to support a proposal to waive patent protections for coronavirus vaccines has faced strong pushback from the European Union.

Questions about how to proceed have intensified in recent weeks as cases in the United States have receded, and infections have surged in some developing countries without adequate vaccine supply, leading to fresh charges of "vaccine apartheid."

So far, the global effort to close that gap has been piecemeal. Some wealthy nations have announced plans to donate surplus doses and have expressed support for the idea of boosting global supply -- but specifics on when and how to proceed are scarce.

COVAX aims to deliver 2 billion doses by the end of the year, with an eye toward vaccinating 20% of the populations of countries in need, but it may not meet that relatively modest target. The initiative has been plagued by funding shortfalls and a severe supply crunch exacerbated by the crisis in India, leading to potentially deadly delays. To date, COVAX has delivered 81 million doses to 129 countries.

After a successful vaccination effort in the United States, Biden tapped Jeff Zients, the covid-19 coordinator, to oversee the country's global vaccination strategy. Zients has been working on the deal for a month, officials said, and the White House wanted the announcement to be a signature part of Biden's trip to the G7 given the urgency of boosting global vaccine supply.

[Video not showing up above? Click here to watch » https://www.youtube.com/watch?v=bIAPWTbLLFg]

"It is meaningful," said Thomas J. Bollyky, a senior fellow at the Council on Foreign Relations and director of its Global Health Program, "but not sufficient on its own."

To assess the scale, he said, consider that 500 million doses is six times the roughly 80 million doses the World Health Organization-linked COVAX Facility has distributed so far. At the same time, it is just a quarter of the 2 billion doses the initiative aimed to distribute this year, with an eye to vaccinating just 20% of the population of participating countries.

"These Pfizer doses will go to many countries, Bollyky said. "The big question is, in what order, and in what amount? That will have significant bearing on what the public health impact of the commitment will be."

With the United States's announcement, international health organizations are calling on other wealthy countries to increase their international commitments as well, warning about the need to curtail the virus around the world to prevent more dangerous variants from spreading.

"We won't end this global pandemic anywhere unless we beat it everywhere," Tom Hart, the acting CEO of The One Campaign, an organization focused on fighting global poverty and preventable disease, said in a statement. "Donating doses to COVAX will save lives, reduce the spread of variants, and help reopen the global economy," he said. "We urge other G-7 countries to follow the U.S. example and donate more doses to COVAX. If there was ever a time for global ambition and action to end the pandemic, it's now."

Biden, who has grown accustomed to touting victories over the virus, now faces two disquieting trends. The slowdown of the vaccination campaign, with only about 50% of the U.S. population having received at least one dose, has coincided with the growing prevalence in the United States of a highly transmissible variant already imperiling Britain's path back to normal and forcing Prime Minister Boris Johnson to decide whether to fully reopen his country as planned.

"It's highly likely we will see a very similar trend as in Britain," said William Lee, vice president of science at Helix, a population genomics company.

The variant, first identified in India and known as delta, accounts for 6% of new infections in the United States, Anthony Fauci, the nation's leading infectious disease expert, said Tuesday. And while preliminary evidence suggests the two-dose vaccines are effective against the variant, there is significantly less protection after just one dose, Fauci said. Meanwhile, the seven-day average of daily vaccinations is hovering at around 1 million, well short of the rate necessary to meet Biden's goal of delivering at least one dose to 70% of adults by July 4.

In the global race to vaccinate people against covid-19, Africa is at the back of the pack.

The WHO says the continent of 1.3 billion people is facing a severe shortage of vaccine at the same time a new wave of infections is rising across Africa. The shortfall is estimated at 700 million doses. And vaccine shipments to the continent have ground to a "near halt," WHO said last week.

"It is extremely concerning and at times frustrating," said Africa CDC Director Dr. John Nkengasong, a Cameroonian virologist who is trying to ensure some of the world's poorest nations get a fair share of vaccines in a marketplace where they can't possibly compete.

In South Africa, which has the continent's most robust economy and its biggest coronavirus caseload, just 0.8% of the population is fully vaccinated, according to a worldwide tracker kept by Johns Hopkins University. And hundreds of thousands of the country's health workers, many of whom come face-to-face with the virus every day, are still waiting for their shots.

In Nigeria, Africa's biggest country with more than 200 million people, only 0.1% are fully protected. Kenya, with 50 million people, is even lower. Uganda has recalled doses from rural areas because it doesn't have nearly enough to fight outbreaks in big cities.

Chad didn't administer its first vaccine shots until last weekend. And there are at least five other countries in Africa where not one dose has been put into an arm, according to the Africa Centers for Disease Control and Prevention.

The United States and Britain, in contrast, have fully vaccinated more than 40% of their populations, with higher rates for adults and high-risk people. Countries in Europe are near or past 20% coverage, and their citizens are starting to think about where their vaccine certificates might take them on their summer vacations. The U.S., France and Germany are even offering shots to youngsters, who are at very low risk of serious illness from covid-19.

Poorer countries had warned as far back as last year of this impending vaccine inequality, fearful that rich nations would hoard doses.

In an interview, Nkengasong called on the leaders of wealthy nations meeting this week at the Group of Seven summit to share spare vaccines and avert a "moral catastrophe."

"I'd like to believe that the G-7 countries, most of them having kept excess doses of vaccines, want to be on the right side of history," Nkengasong said. "Distribute those vaccines. We need to actually see these vaccines, not just ... promises and goodwill."

Billionaire philanthropist Mo Ibrahim is sharply criticizing the hoarding of covid-19 vaccines by wealthy nations, urging the international community to "walk the talk" of equitable distribution as Africa desperately lags behind.

Ibrahim, a British mobile phone magnate who was born in Sudan, is hailed as a voice of moral authority across Africa.

He lamented the global "competition" for vaccines in an interview with The Associated Press. He said he views the pandemic-era phrase "nobody is safe until everybody is safe" as a meaningless slogan until there is an equitable distribution of covid-19 vaccines around the world.

"They say that while they are hoarding the vaccine. Can you walk the talk? Stop just talking like parrots, you know, and do you really mean what you said?" Ibrahim said late Tuesday in a Zoom call from London, where he is based.

He argued that "at least a reasonable portion" of the vaccines should go to frontline workers in Africa.

Ibrahim warned also that Africa cannot afford to sit back, citing a need for greater accountability by governments which pledged in 2001 to spend at least 15% of their national budgets on public health. Economic integration that widens trade among nations is key, he said.

While support from abroad is welcome, he said, "we should rely much more on ourselves. I always thought self-reliance is something important in Africa."

"We really need to build resilient health service in our countries," he said.

Information for this article was contributed by Tyler Pager, Emily Rauhala, Isaac Stanley-Becker and Dan Diamond of The Washington Post; and by Rodney Muhumuza, Gerald Imrayand staff members of The Associated Press.