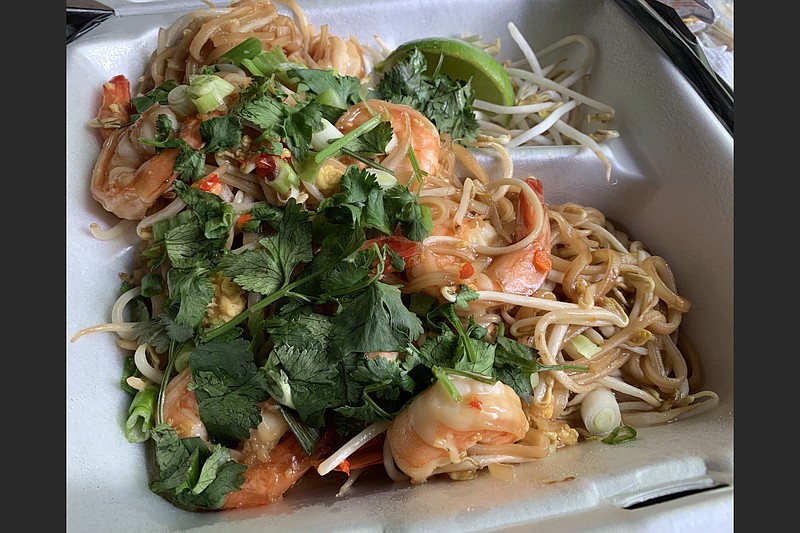 The River Market's Ottenheimer Market Hall, 400 President Clinton Ave., Little Rock, reopened in early May, with many — though not all — of the tenants returning to the kiosks they occupied when the pandemic shut it down 14 months before.

Which gave us an idea for this Takeout Tastings column focusing exclusively on Market Hall vendors, which we visited fairly often back in the pre-pandemic day.

Right now, the Market Hall is only open for lunch, somewhere in the vicinity of 10:30 a.m.-2 p.m. Some of the now-vacant kiosks have been turned into cute seating areas, which allows for more distancing of the tables in the middle of what is essentially a food court.

Market Hall foot traffic is still pretty sparse, so we're conflating the "How it's going" portion of each listing into an overall assessment that waits at each of these purveyors are fairly short. Otherwise, all our takeout rules apply: the Market Hall is well within our hot-food-heading-home radius; none of these are chains; and we paid up front for all meals consumed.

Current area full-service Thai options include Zangna Thai Cuisine, recently moved to west Little Rock's Bowman Curve from southwest Little Rock's Shackleford Crossings; K-bird in Little Rock's Hillcrest; Sherwood's Chang Thai & Asian Cuisine and Bangkok Thai. There's also a couple of decent-to-excellent food trucks. The food at Bangkok has always been good, including the Pad Thai, a basic common denominator/bellwether "test" dish (if a Thai kitchen can't do Pad Thai right, you have the right to assume they're not going to be particularly good at anything else.)

Here they make the Pad Thai "right," with thin noodles, a rich sauce and the usual adjuncts, including bean sprouts. We get ours with just a hint of heat. You have to add the chopped peanuts yourself from a covered dish on the counter. This one came with a bit more lemongrass garnish than we expected. One unexpected "hitch" on our visit: the Thai iced tea, black tea blended with sweetened cream to create a sort of vermilion "smoothie," had gone up a whole dollar post-pandemic. Still worth the price, though.

HOW IT WENT: We had a very short wait to order, and a pretty short wait — somewhere between the five and 10 minutes we were told it would take — for our food to come over the counter. 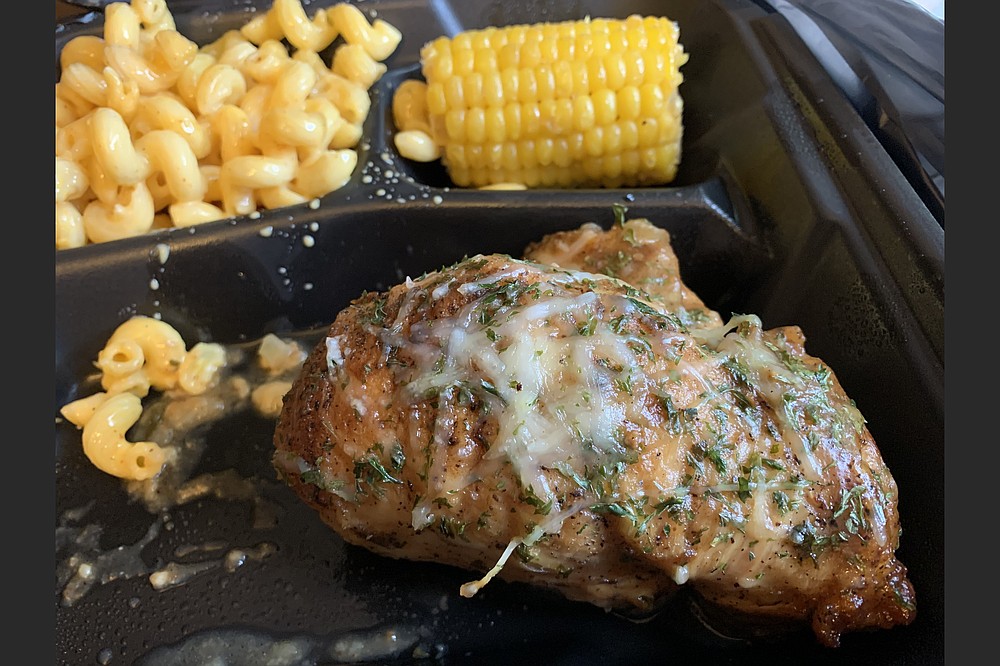 Chicken Cordon Bleu — a huge boneless chicken breast stuffed with ham and cheese — was the centerpiece of a plate lunch with mac and cheese and a corn cobette from Platnum BBQ. (Arkansas Democrat-Gazette/Eric E. Harrison)

WHAT WE GOT: Chicken Cordon Bleu plate lunch with two side items (corn cobette and mac and cheese) ($10.95)

This estimable establishment survived the pandemic by moving its interim operations to a food truck, with which, though we made several attempts, we never managed to catch over the past year. How enjoyable it was to reconnect over as fine a plate lunch as this was: a huge, boneless chicken breast, stuffed with ham and a tangy melted cheese and topped with a little more cheese, sparsely grated. Platnum's mac and cheese, a pre-pandemic treat, is just as cheesy and good as it ever was, and Platnum is one of a comparatively few places that has corn cobettes as a regular, especially summertime, side item.

HOW IT WENT: We got to the counter behind a family with two parents and four kids who were having a tough time figuring out what to order, which was rather frustrating. Since the plate lunch stuff is on display, a la a cafeteria, however, it took next to no time to actually dish up our food. 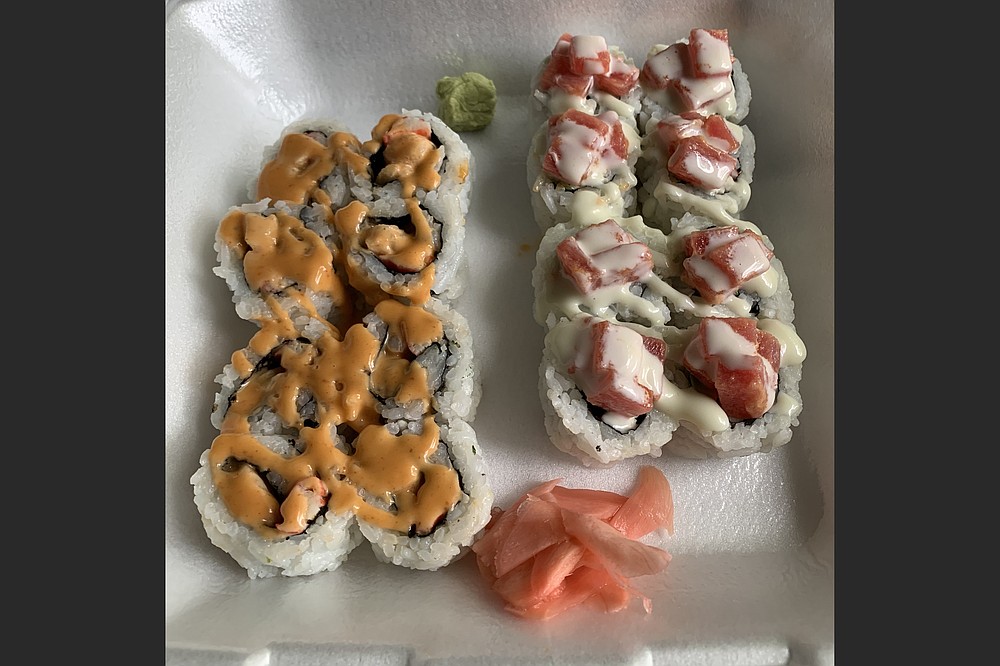 Fresh Bowl N Roll Bar started out 2½ years ago as a primarily a poke place that also served sushi. Now that it has come back, it's a sushi place that also does poke, which it only serves up a couple of days a week. Owner Mordecai Lee, an old acquaintance (he used to run downtown's Hanaroo and the short-lived west Little Rock sushi-hibachi place Eastern Flames), is slicing and dicing behind the sneeze guard, with a menu of two dozen rolls — 12 "regular" and 12 "deluxe."

We chose one of each. Our simpler but decent Spicy Shrimp roll featured shrimp and "crab" (actually quasi-crab surimi) rolled in rice and drizzled with a spicy mayonnaise. Our more elaborate Waikiki Twist wrapped quasi-crab, avocado and cucumber inside the rice with tuna on top and a more delicate wasabi mayo drizzle. Neither was overly adventurous; both tasted fresh and filled the bill, as well as us.

HOW IT WENT: There were no other customers competing with Lee for attention, so we got our rolls within the 10 minutes he promised. 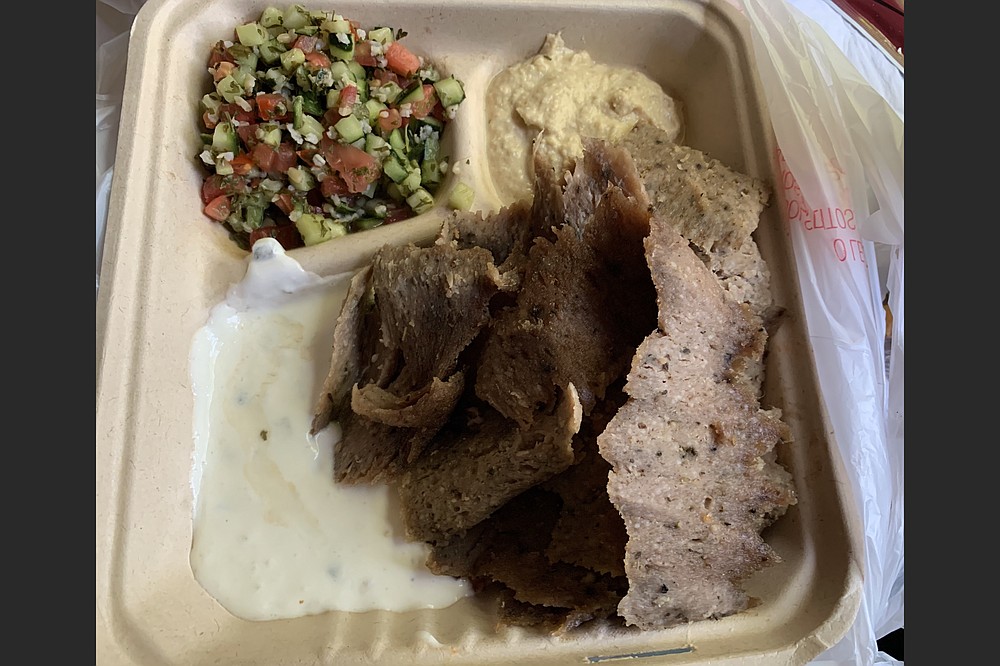 Our gyros plate from Middle Eastern Cuisine in the Ottenheimer Market Hall came with two sides; we opted for hummus and tabbouleh. (Arkansas Democrat-Gazette/Eric E. Harrison)

WHAT WE GOT: Gyros plate ($10) with two sides (hummus and tabbouleh)

This simply named kiosk is another long-standing tenant of the Market Hall, and was around long before the number of Middle Eastern/Mediterranean places around here began to burgeon. It's noteworthy not just for serving gyros but for a number of daily specials that can be turned into plate lunches with the addition of two side items. The owner, Obaida Abdin, ex-wife of "founder" Wael Abdin, who retired in December 2018, waits on customers.

It may be our memory is at fault, but we found the food not quite as enjoyable as we did pre-pandemic. Some, though not all, of the gyros slices, shaved off a saddle in plain view of patrons, had a slightly gummy mouth feel. The tabbouleh, which had been one of our favorite versions of this quasi-salad (chopped cucumbers, tomatoes, parsley and bulgur wheat), was blander than we remember, missing a little vinegary kick. Only the smooth-textured hummus (a dip of chickpeas, sesame paste, olive oil, lemon and garlic) was as good as we remember.

HOW IT WENT: The main items, including the shaved gyros, are up front behind a sneeze guard; side items are kept in the back. So it took Abdin a couple of minutes to assemble our to-go plate, plus a piece of pita, but we didn't have very long to wait. By the way, there's now a 4% surcharge on credit-card payments (including tip), which a sign on the counter plainly explains.