Anything can happen at Torrey Pines 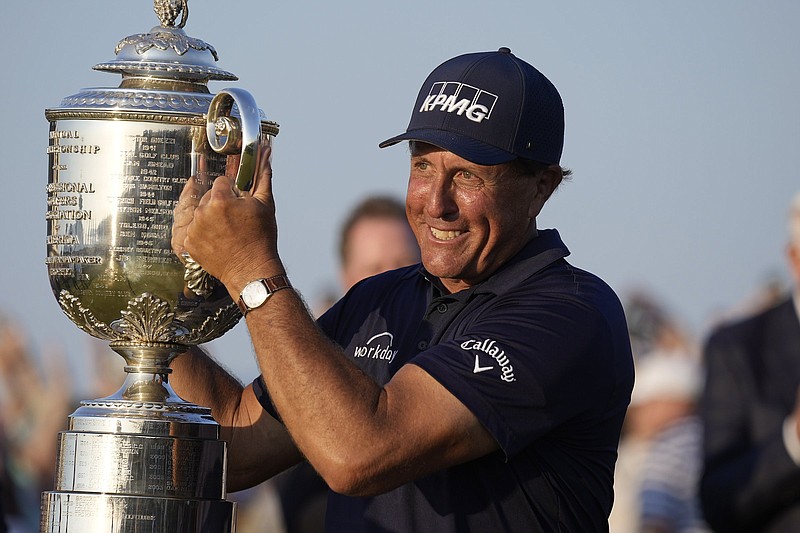 Phil Mickelson, who won the PGA Championship last month, turns 51 just before next week’s U.S. Open and will be a sentimental choice to complete a career Grand Slam at Torrey Pines Golf Course in La Jolla, Calif. (AP/David J. Phillip)

The strongest memory from the last U.S. Open at Torrey Pines was accompanied by three words that explain what golf was like then and now.

The scene was the 18th hole in the final round of 2008. The consequences were as clear as the late afternoon sky over San Diego in June.

Tiger Woods, who had limped his way around the South Course on torn ligaments and a double stress fracture in his left leg, faced a 12-foot birdie putt. Make it and he would force a playoff against Rocco Mediate. Miss it and he would lose.

When the putt somehow curled in the right side of the cup and Woods triple-clutched his arms in raw celebration, Dan Hicks of NBC said, "Expect anything different?"

Woods was the singular force in golf even on one leg, even in the toughest test golf offers.

Now? Expect pretty much anything.

The 121st U.S. Open returns June 17-20 to Torrey Pines, the city-owned course along the Pacific bluffs, and there's no telling what might happen.

The two best players in the world, Dustin Johnson and Justin Thomas, went into the final week having not so much registered a top 10 in the last three months. Jon Rahm is No. 3 in the world and a past winner at Torrey Pines. His 10 days of self-isolation from a positive covid-19 test ends two days before the opening round.

The defending champion is Bryson DeChambeau, the most out-of-the-box golfer in decades whose road map to victory last September at Winged Foot was to hit driver as far as he could without regard to whether it found the fairway.

The sentimental favorite is Phil Mickelson, who turns 51 on the eve of the U.S. Open. He accepted a special exemption from having fallen out of the top 100 in the world for the first time in nearly 30 years. And then he won the PGA Championship a week later to become the oldest major champion in history.

Six times a runner-up in the U.S. Open, it's the only major keeping Mickelson from the career Grand Slam.

"I know that I'm playing well and this could very well be my last really good opportunity to win a U.S. Open," Mickelson said. "So I'm going to put everything I have into it."

What should be expected is Torrey Pines being the kind of test that defines an old-fashioned U.S. Open. It's one of the strongest courses on the PGA Tour in January when the turf is soft and there is less regard for the winning score.

Throw in the USGA, narrow fairways, the dry air of June, and 7,652 yards on a South Course that plays every bit that length at sea level. It should be all the players want.

"I don't think the USGA has to do a hell of a lot to make it very difficult," Louis Oosthuizen said "It's already a tough golf course."

That much was said about Winged Foot last year, the New York course that in five previous U.S. Opens had yielded only two 72-hole scores under par among 750 players who had tried. And then DeChambeau won by six shots at 6-under 274, the lowest score ever at Winged Foot.

Whether that's a template for any U.S. Open remains to be seen.

"If it plays the same way, where you can bomb it into certain places and play to a better angle, I'm going to do it," DeChambeau said. "If they make it the same way, I'll continue to play the same way."

Only two players in the last 50 years have won the U.S. Open in consecutive years -- Curtis Strange (1988-89) and Brooks Koepka (2017-18). DeChambeau would love nothing more than to join them, and that might be the final word in his social media riff with Koepka.

That has been as entertaining as anything in golf since the PGA Championship. Someone leaked an unaired Golf Channel interview with Koepka in which he rolls his eyes when he notices DeChambeau walking behind him, pauses the interview and then uses salty language to express his disdain for DeChambeau.

It's rare for players to be so public with a dispute. DeChambeau said it was "flattering" that Koepka seemed to be so obsessed with him, while Koepka offered no apologies and even suggested their spat was creating interest in golf.

"The fact that golf's on pretty much every news outlet for about two weeks pretty consistently, I think that's a good thing," Koepka said. "It's growing the game."

It has the potential to be a sideshow at the U.S. Open, a major that can create enough drama on its own as it tries to identify the best player with a course that can be extreme.

It's not a direct comparison because the PGA Tour event at Torrey Pines includes one round on the North Course. Even so, Woods was 14 shots higher in the U.S. Open than he was when he won by eight shots at the PGA Tour event in 2008.

"The biggest difference is how firm the greens are," Jordan Spieth said. "I've seen the forecast of cooler nights, 75 degrees and no rain, so they can do whatever they want [with the setup]. I don't know if the fairways will be narrower, but they'll play more narrow. I imagine there will be six or seven holes where you say, 'All right, I'll have a good look at birdies.' The rest you pitch on the front and get it to the middle." 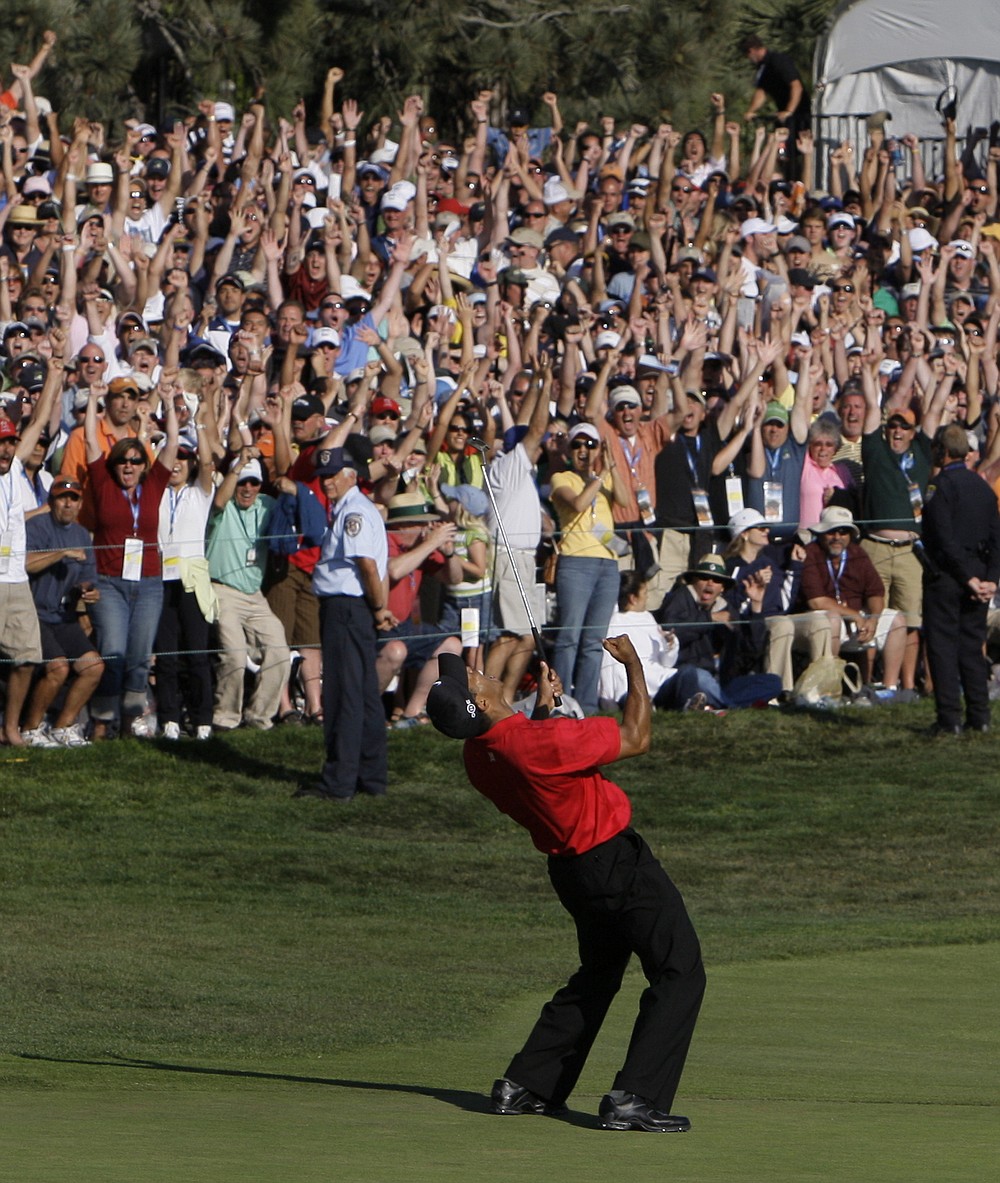 FILE - In this June 15, 2008, file photo, Tiger Woods reacts after sinking a birdie putt on the 18th green, forcing a playoff against Rocco Mediate during the fourth round of the U.S. Open golf tournament at Torrey Pines Golf Course in San Diego. The U.S. Open returns to Torrey Pines on June 17-20, minus Woods as he recovers from leg injuries in a car crash. (AP Photo/Chris Carlson, File) 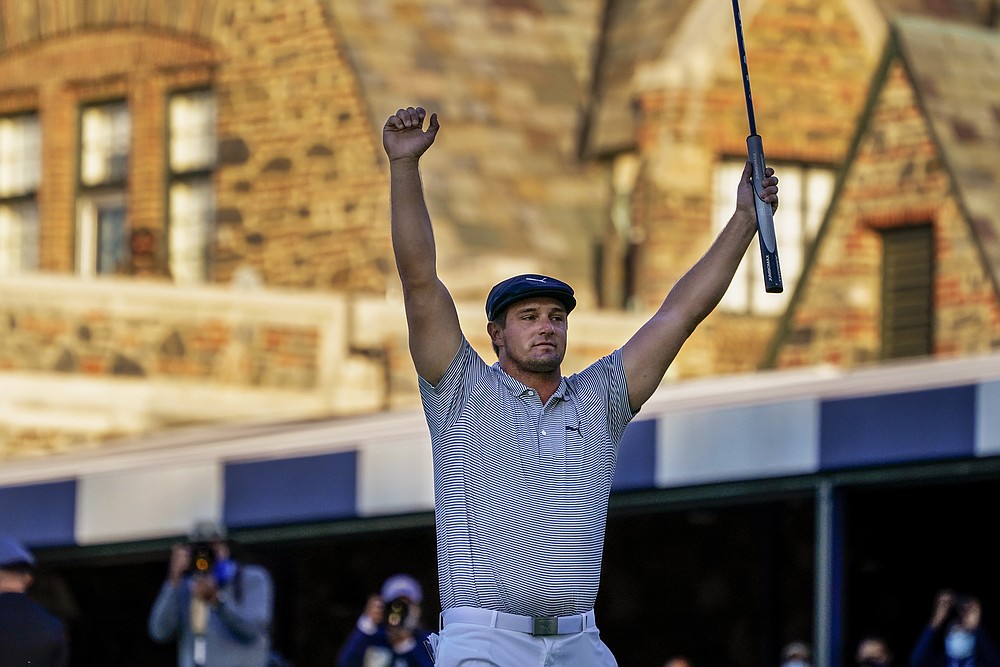 FILE - In this Sept. 20, 2020, file photo, Bryson DeChambeau, of the United States, reacts after sinking a putt for par on the 18th hole to win the U.S. Open golf tournament in Mamaroneck, N.Y. DeChambeau will try to win back-to-back on June 17-20 in the U.S. Open at Torrey Pines. (AP Photo/Charles Krupa, File)
ADVERTISEMENT