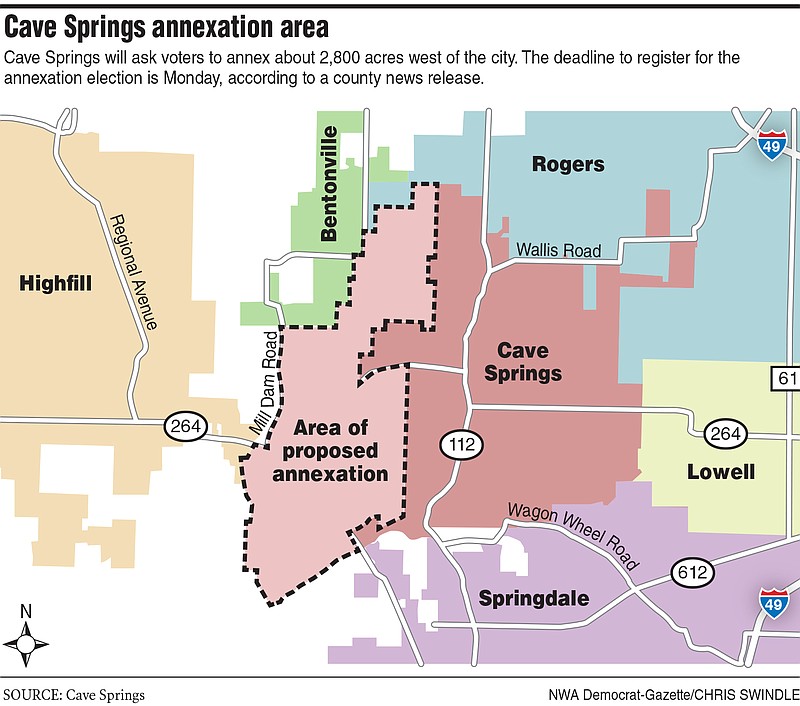 BENTONVILLE -- Benton County officials will hold their fourth special election of the year July 13 when Cave Springs voters head to the polls in an annexation election.

Both counties have more elections scheduled in 2021, officials said.

"This is the busiest we have been in an off year," said Jennifer Price, Washington County Election Commission executive director.

The deadline to register for all the July 13 special elections is Monday.

Deadlines and time of the year can be factors when calling a special election, Benton County Clerk Betsy Harrell said.

"It could be because it takes a few months to discuss it and get it through whatever body is calling it. Then they have to allow a couple of months for deadlines, so it usually ends up running into the summer time," Harrell said. "They want it done before August because that's when most governing bodies start talking about budgets."

The random special election calendar is about to get organized.

Kim Dennison, election coordinator for Benton County, sees the move to a set group of election days as a positive.

"For voters, they can know that they only have to be looking for those four dates to see if they have something to vote on," she said.

Washington County has special elections July 13 for the Boston Mountain and Sunset fire districts to collect fire dues with personal property tax bills. The districts are in the Winslow area.

If the measures are approved, the county Assessor's Office will identify all occupiable structures in the districts and the county collector will list those properties on the tax bills of the owner as a voluntary tax.

The tax remains voluntary. If a property owner pays the dues, he's covered in the event of a fire. If he doesn't pay the dues, he's billed for any response, according to the number of trucks needed. The annual dues are $50 for each district.

There are 727 residential structures and 15 commercial structures in the Boston Mountain Fire District, according to information from the Washington County Assessor's Office.

There are 181 residential structures in the Sunset Fire District and no commercial structures, according to Assessor Russell Hill.

An election on a new, 1-cent sales tax for bonds to fund a phase of the Main Drive/Wilkerson Street road and infrastructure project in Johnson is also July 13. Johnson voters also will decide on a separate 1% tax that would fund things like parks. The money would come from an Advertising and Promotions Commission tax on prepared food, drinks and lodging, Mayor Chris Keeney said.

Cave Springs will ask voters to annex about 2,800 acres to the west of the city. The area proposed for annexation includes an unincorporated part of Arkansas 264 between Cave Springs and Highfill.

The annexation is part of a plan called "Cave Springs -- Forward Together for the Future," Mayor Randall Noblett said. The city's size will increase more than 55%, from 5,043 acres to 7,842 acres, if voters approve the annexation.

Registered voters in the city and annexed area are eligible to vote. A majority vote will determine if it passes or not, according to the County Clerk's Office.

Noblett previously said he expects the 2020 U.S. Census to show the city has more than 6,000 residents. He doesn't know how many people live in the proposed annexation area, he said.

Cave Springs' city property tax is 2.75 mills. A city website set up to provide information on the annexation says Cave Springs residents have a more localized response for public safety, road maintenance and utilities; have access to sanitary sewer; and have water rates lower than those living outside the city.

The imminent development of the Arkansas 612 expansion project, the Arkansas 112 widening and realignment project and a planned airport access road all stand to have a significant impact on Cave Springs in regard to traffic patterns, economic development, future land use and the social fabric of the city and surrounding area. All of these projects will also affect the annexation area, according to a city website dedicated to the election.

Cave Springs had 4,063 registered voters as of Tuesday, according to the Benton County Clerk's Office.

Gentry passed Sunday alcohol sales in February. That was followed by extension of 1% sales tax elections in Bentonville in April and Lowell in May. Both items also passed.

Garfield has a special election set for September to extend its 1% sales tax, Dennison said. The Pea Ridge City Council is set to consider a request for a 1-cent sales tax special election at its Tuesday meeting.

Fayetteville will have an election Aug. 10 on a proposed extension of a 1-cent sales tax.

The Cave Springs — Forward Together for the Future plan can be found at https://cs-annex.transportationplanroom.com .