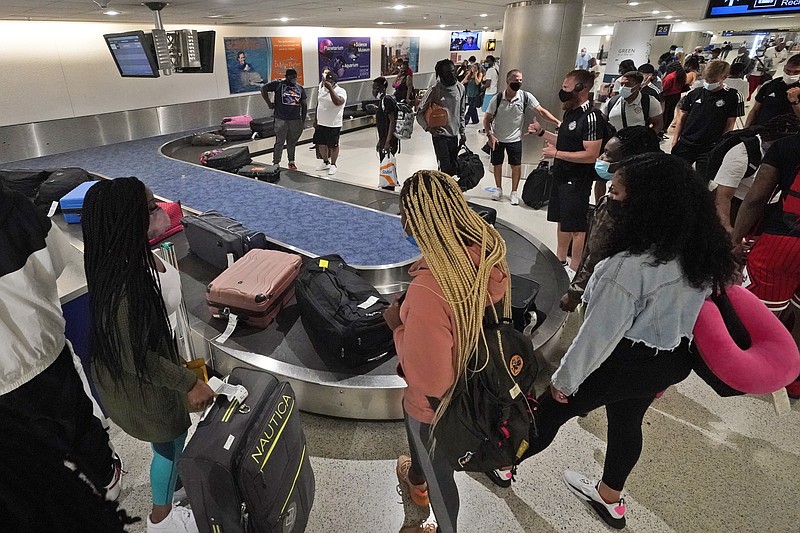 FILE - In this May 28, 2021 file photo, travelers wait for their luggage at a baggage carousel at Miami International Airport in Miami. The airline industry’s recovery from the pandemic passed a milestone as more than 2 million people streamed through U.S. airport security checkpoints on Friday for the first time since early March 2020. (AP Photo/Wilfredo Lee, File)

The Transportation Security Administration announced Saturday that 2.03 million travelers were screened Friday. It was the first time in 15 months that the number of security screenings has surpassed 2 million in a single day.

Darby LaJoye, who is filling in as the agency's administrator, said the numbers underscore the country's resilience: "TSA stands ready to provide a safe and secure screening process as part of the overall travel experience," he said.

Airline bookings have been picking up since around February, as more Americans were vaccinated against covid-19 and -- at least within the United States -- travel restrictions such as mandatory quarantines began easing.

The recovery is not complete. Friday's crowds were only 74% of the volume compared with the same day in 2019. However, the 2.03 million figure was 1.5 million more travelers than the same day last year, according to the Transportation Security Administration.

The mark represents quite a turnaround for the travel industry, which was hammered by the pandemic. There were days in April 2020 when fewer than 100,000 people boarded planes in the U.S., and the CEO of Boeing predicted that at least one major U.S. airline would go bankrupt.

Most of the airlines are still losing money. Southwest eked out a narrow first-quarter profit thanks to its share of $64 billion in federal pandemic relief to the industry, and others are expected to follow suit later this year.

The fear of large-scale furloughs has lifted. United Airlines, which lost $7 billion and threatened to furlough 13,000 workers last fall, told employees last week that their jobs are secure even when the federal money runs out in October.

"This program should serve as a model for the future," said Sara Nelson, president of the Association of Flight Attendants. "Now that we're on our way out of the worst crisis in aviation history, we look forward to building a just recovery that respects the contributions of all the workers who keep us flying high."

United and others are upbeat about salvaging the peak summer vacation season. International travel and business trips are still deeply depressed, but domestic leisure travel is roughly back to pre-pandemic levels, airline officials say.

The industry's focus is increasingly turning to easing international travel, especially between the United States and major markets like Canada and the United Kingdom. The Biden administration is forming expert groups to evaluate when it will be safe to lift some restrictions on visitors from overseas.

With the pickup in business, airlines are recalling employees from voluntary leave and planning to hire small numbers of pilots and other workers later this year.

And the Transportation Security Administration has been racing to hire new officers, offering cash incentives and asking office workers to help out at checkpoints.

Many of the agency's 50,000 officers continued to work during the pandemic, and 8,119 tested positive for the virus. Sixteen officers have died of covid-19, along with a screening contractor.

Hotel operators say they, too, have seen bookings improve as vaccination rates rise.

Mike Gathright, a senior vice president at Hilton, said the company's hotels were 93% full over Memorial Day weekend. He said the company is "very optimistic" about leisure travel over the summer and a pickup in business travel this fall.

"The vaccine distribution, the relaxed travel restrictions, consumer confidence -- all of that is driving occupancy and improvement in our business," Gathright said.

Before the pandemic, the Transportation Security Administration screened on average 2 million to 2.5 million travelers per day. The lowest screening volume during the pandemic was on April 13, 2020, when just 87,534 people were screened.

By the middle of last month, the agency's average daily volume for screenings was approximately 65% of pre-pandemic levels.

As the summer travel season approaches, the agency is advising passengers to arrive at the airport with sufficient time to accommodate increased screening time as traveler volumes are expected to approach and in some cases exceed pre-pandemic levels at certain airports. Some already have had long lines.

New infections and deaths in the U.S. are down dramatically, though more contagious variants are spreading. Most people are now are at least partially vaccinated, yet lingering hesitancy has slowed the pace and even caused some doses to go to waste.

So is the emergency over, or is it continuing?

That's the question facing residents and business owners in many states as governors decide whether to end or extend emergency declarations that have allowed them to restrict public gatherings and businesses, mandate masks, sidestep normal purchasing rules and deploy National Guard troops to help administer vaccines.

In many states, those emergency declarations have been routinely extended by governors every few weeks or months since the pandemic began. But those decisions are getting harder to make -- and the extensions harder to justify -- as circumstances improve and state lawmakers press to restore a balance of power.

More could join that list soon. About half the states have emergency orders set to expire before the Fourth of July. And more than a dozen others have open-ended orders that governors could cancel at any time.

Massachusetts has been in an indefinite state of emergency for 15 months. But Gov. Charlie Baker has said that will come to an end Tuesday. He credited the state's high vaccination rate with helping turn the tide.

"Unless something odd happens, I would say that it is pretty much over," said Baker, a Republican.

Coronavirus emergencies also could expire Tuesday in Kansas and Vermont.

Top Republican lawmakers in Kansas, whose approval is needed for an extension, have signaled they won't continue an order issued by Democratic Gov. Laura Kelly, though she prefers it remain through August.

Vermont Gov. Phil Scott, a Republican, has said he will end all remaining emergency restrictions once 80% of eligible residents receive at least one dose of a vaccine -- a threshold the state is close to reaching.

Hawaii Gov. David Ige, a Democrat, recently renewed his emergency declaration for 60 days, through Aug. 6. The tourist-dependent state, which imposed quarantines on travelers that effectively shut down the tourism industry, has the nation's lowest per-capita case rate since the pandemic began -- and the highest unemployment rate. While some might cite that as a reason to lift emergency orders, Ige said it is too soon.

"Covid-19 continues to endanger the health, safety, and welfare of the people of Hawaii," Ige wrote in extending his declaration.

In California, Gov. Gavin Newsom is ending most restrictions effective Tuesday but maintaining the underlying emergency declaration. Though that might sound confusing, the move allows him to retain his power to suspend state laws, impose new rules and reinstate restrictions if cases spike again.

"This disease has not been extinguished. It's not vanished," the Democratic governor said.

That doesn't sit well with legislative Republicans, who are in the minority. In the state Senate, they have tried repeatedly to pass a resolution that would end Newsom's declaration, but can't persuade majority Democrats.

"California's vaccination rate is high and the covid infection rate continues to decrease," said Republican state Sen. Melissa Melendez. "It is time for the Legislature to shake off the impotency the governor has imposed on the legislative branch of government."

Nationally, the public-health emergency declared by Health and Human Services Secretary Xavier Becerra is scheduled to run through July 20, though another 90-day extension is possible.

Within the past week, the Association of State and Territorial Health Officials has received an increased number of inquiries from state officials about the potential consequences of rescinding their emergency declarations, said Andy Baker-White, the association's senior director of health policy.

Much of the federal pandemic aid -- including $350 billion for state and local governments in President Joe Biden's recent relief package and reimbursements for vaccine distributions -- could flow to states even if they end their emergency declarations.

But some federal aid could be affected. States are eligible for enhanced federal food aid benefits only if they have a covid-19 emergency or disaster declaration in place, according to a Congressional Research Service analysis.

For many governors, keeping emergency declarations in place may be less disruptive to the public than rescinding and later reimposing them if the pandemic worsens, said Dr. Georges Benjamin, executive director of the American Public Health Association.

But for other governors, it might be advantageous to relinquish their emergency powers, he said.

"Quite frankly, in a state where you're worried that people will accuse you of misusing those authorities, if you don't need them, you might want to get rid of them," Benjamin said.

New Jersey Gov. Phil Murphy, a Democrat who is up for reelection this year, ended the state's public-health emergency earlier this month as part of a deal with Democratic lawmakers, who control the Legislature. He also signed legislation eliminating more than 100 executive orders while retaining about a dozen, including those placing moratoriums on evictions and utility shutoffs.

Murphy called it a "clear and decisive step on the path toward normalcy," but some Republican lawmakers said it didn't go far enough.

In Pennsylvania, the Republican-led Legislature voted Thursday to end Democratic Gov. Tom Wolf's emergency declaration -- making use of new powers granted to lawmakers under a constitutional amendment approved by voters last month. But the practical effect is limited, because lawmakers also voted to extend hundreds of regulatory waivers granted by Wolf's administration through Sept. 30.

Ending emergency declarations can affect a variety of lower-profile policies, such as relaxed licensing requirements in many states that have allowed more medical professionals to return to the workforce.

After Oklahoma Gov. Kevin Stitt, a Republican, ended his emergency declaration May 4, the state stopped updating its online dashboard with the number of available hospital beds and its stockpile of ventilators, masks and other personal protective equipment. Rescinding the emergency order also triggered a 30-day countdown to resume in-person meetings for governmental bodies, and ended state agencies' ability to hire additional workers and shift resources.

Benjamin of the public-health association said he expects more states to end their emergency orders in coming weeks because of improved infection and vaccination data, as well as public fatigue over long-running precautions.

"There's an emotional or psychological message you're sending that you're saying 'OK, we're no longer in the emergency state,'" he said. "There's an opportunity there to give people a sense of normalcy."

Information for this article was contributed by David Koenig, David A. Lieb, John Hanna, Audrey McAvoy, Sean Murphy and Wilson Ring of The Associated Press; and by Ian Duncan of The Washington Post.