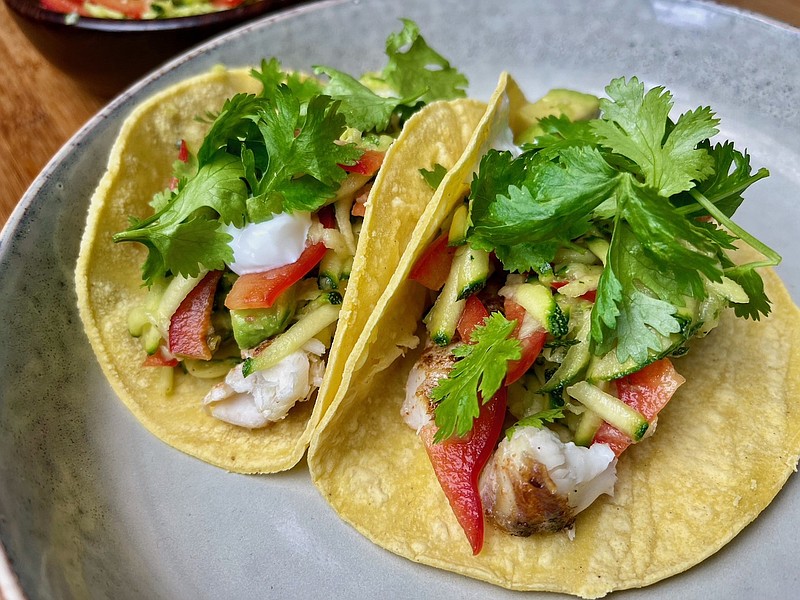 I usually top fish tacos with a quick slaw of red cabbage, red bell pepper, radish (if I have some), shredded carrot (if I have one), avocado, cilantro and lime juice. Simple and easy.

While browsing through "The Best Mexican Recipes" from America's Test Kitchen I came across a recipe for zucchini-avocado slaw. In the cookbook the slaw was paired with potato fritters, but I just knew it would be delicious on fish tacos.

It was essentially the same as what I've been making, but with shredded zucchini in place of the cabbage.

I made a few adjustments — swapping in pickled jalapeno for a bit more acid, reserving the cilantro for garnish and skipping the green onion because I didn't have any — and it was just as good as planned.

In a departure from the norm, the fish for these tacos is not battered and deep fried. Instead, it is generously seasoned and pan cooked. Use any mild, firm white fish you like — haddock, cod, mahi mahi, tilapia or halibut. You could even make these with catfish.

If you have any slaw leftover, it's great on its own.

[Video not showing up above? Click here to watch: arkansasonline.com/616burner]

Wrap the zucchini in a towel and squeeze out excess liquid.

In a large bowl, combine the squeezed zucchini, bell pepper, avocado, jalapeno, lime zest and juice and garlic; season to taste with salt and pepper. Mix well, cover and refrigerate while you prepare the fish.

Heat the oil in a large skillet over medium-high heat, add fish and cook for about 4 minutes on each side, or until flaky. Using a fork, break the fish into bite-size pieces.

Serve fish in warmed tortillas topped with zucchini-avocado slaw and garnish as desired.