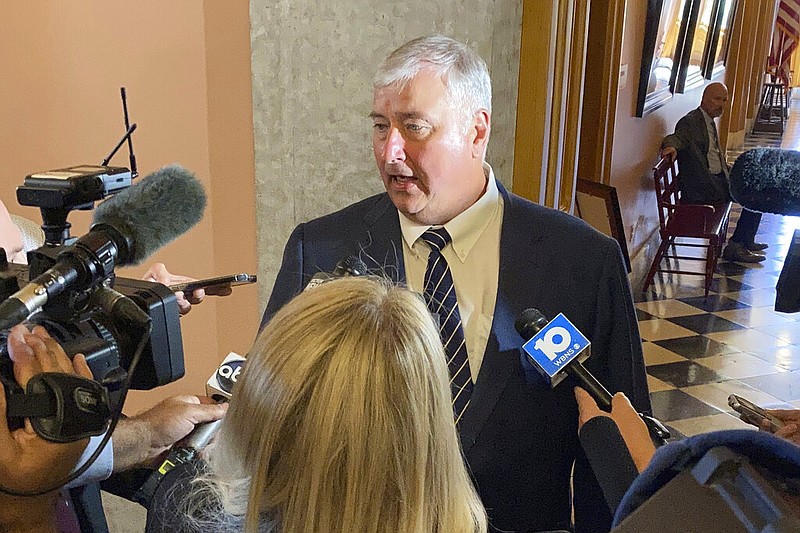 Former Ohio House Speaker Larry Householder, R-Zanesville, speaks to the media immediately after his expulsion from the Ohio House on Wednesday, June 16, 2021, in Columbus. Householder is accused of taking money from a utility in exchange for orchestrating a multi-million dollar scheme to get him elected as speaker. He has pleaded innocent. (AP/Andrew Welsh-Huggins)

COLUMBUS, Ohio — Members of the Ohio House expelled Larry Householder, the indicted Republican ex-speaker, in a bipartisan vote Wednesday, invoking their powers to remove a member for the first time in 160 years.

The GOP-controlled House voted 75-21 to remove Householder of Perry County just southeast of Columbus, approving a resolution that stated he was not suited for office because of the indictment.

“I have not nor have I ever taken a bribe or solicited or been solicited for taking a bribe,” said Householder, as he reiterated his innocence on the House floor before he was expelled.

The full House took to a vote after Republican lawmakers forced the measure to the floor instead of waiting for the expulsion resolution to work through the committee process.

Reps. Brian Stewart and Mark Fraizer, both Republicans representing districts that border Householder’s, encouraged their colleagues to “do the right thing” and remove Householder from his seat.

Householder and four associates were arrested in July in an investigation connected to legislation containing a ratepayer-funded bailout of two Ohio nuclear power plants. The $1 billion rescue would have added a new fee to every electricity bill in the state and directed over $150 million a year through 2026 to the plants near Cleveland and Toledo.

Federal prosecutors say that Householder and his allies took FirstEnergy money in exchange for orchestrating a scheme to elect Householder speaker, put his allies into House seats, then pass the bailout bill and thwart a subsequent ballot effort to repeal it.

If he is convicted of the federal charges against him, Householder could face up to 20 years in prison.

Both Democrats and Republicans in Ohio reacted to Wednesday’s vote.

State Rep. Emilia Sykes, the top House Democrat, who has been urging lawmakers to expel Householder for more than a year, said Householder gave the chamber “no choice but to act.”

“Make no mistake, there is no joy in seeing a former Ohio speaker removed from office in disgrace, but this is our opportunity to stand against corruption and to turn a page on this dark chapter in Ohio history and begin to rebuild the people’s trust in a government that’s supposed to work for them,” Sykes said in a statement.

A day before his colleagues voted him out, Householder appeared in front of a committee where he delivered an hourslong testimony on why removing him from office would be the wrong thing to do.

“Just think of the precedent this will set: Allegations are enough to remove anyone from office,” Householder testified Tuesday. “That’s absurd.”

Two of Householder’s co-defendants and an involved nonprofit have pleaded guilty in the case. FirstEnergy, the energy company at the heart of the latest scandal, has acknowledged in court filings making the bulk of the payments in a bribery scheme that prosecutors say totaled $60 million.

The last time the Ohio House expelled a sitting lawmaker was in 1857 when John P. Slough was removed for punching a fellow legislator.

On Tuesday, Householder went on to compare the bipartisan efforts to remove him to the impeachment of former President Donald Trump earlier this year. “This is clearly politically motivated, and I think everyone in this room knows that,” he said.

In 2004, Householder left the House the first time due to term limits while he and several top advisers were under federal investigation for money laundering and irregular campaign practices. The government later closed the case without filing charges.

Householder was again elected speaker in 2019.