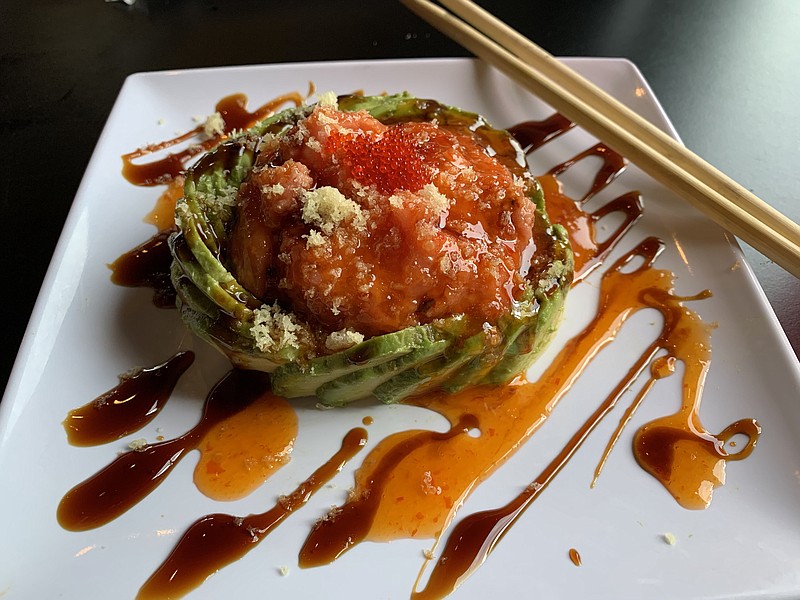 It was only a couple of months between the opening of Little Rock's first outlet of the Alabama-based Rock N Roll Sushi franchise-chain operation, on Chenal Parkway, and the second, which took over the former Atlas Bar, 1224 Main St.

A local real estate agent persuaded the franchisees, Chris Kramolis and Jason Alley, to put sushi into SoMA. Atlas Bar left most of its kitchen equipment in place when it closed, and the new owners not only left the Art Deco-influenced bar intact, but built a small matching sushi bar in the back of the dining room with the same design and even the same materials.

Bar seating is on red-vinyl chairs; dining-space seating is at one of three black two-topped tables in the middle of the floor or in one of six four-person black-on-black booths along the south wall. Up in the front there are two tall bar tables and, on a raised stage, an eight-seat round party table.

Sushi purists will undoubtedly turn up their noses at the rock-theme menu, which puts rolls with various rock-connected names (like "Groupie," "Metalhead," "Sunset Strip," "Tour Bus" and "Velcro Pygmies") under a header that says "Headliners," and highlights fan favorites with a hand-gesture icon that represents "Greatest Hits." 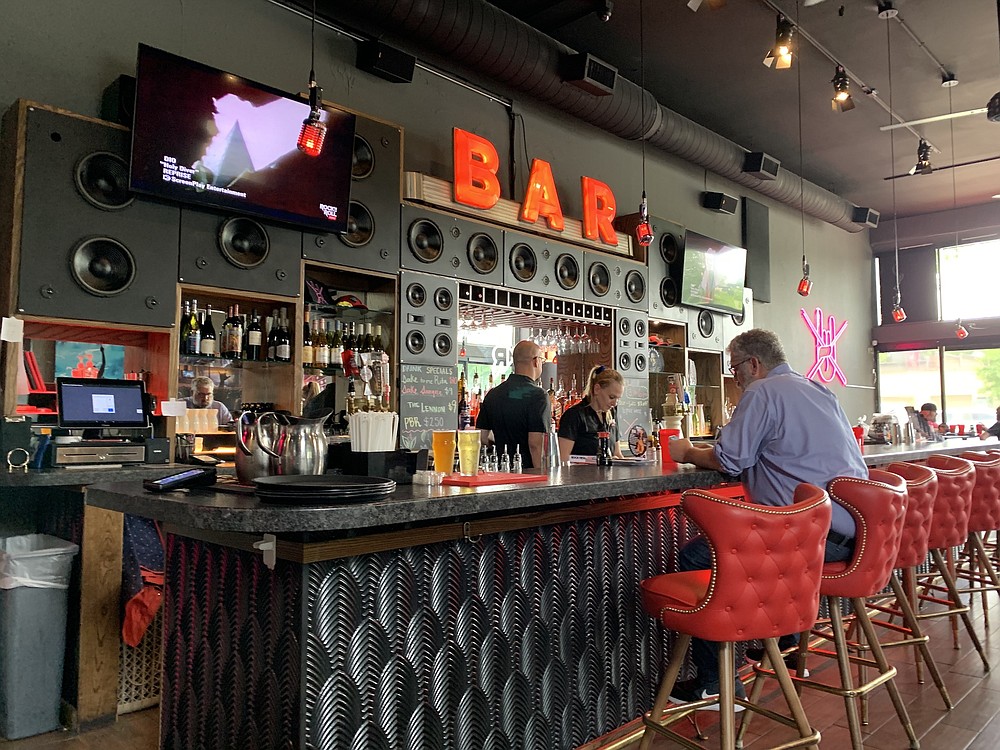 The bar at Rock N Roll Sushi, with an Art Deco facade, is the single surviving relic of the Atlas Bar. Behind the bar, speakers indicate that the management could blow customers out the windows if they ever cranked up the music videos showing on the TV screens. (Arkansas Democrat-Gazette/Eric E. Harrison)

Some, perhaps the same purists, will likely object to the distinctly non-Asian decor, which includes blown-up photos of rockers and TVs playing rock videos that also supply the soundtrack. Behind the Art Deco bar, the north wall is mostly big speakers, which implies that the management could blow customers out the southside windows if they so choose. Luckily, the sound level is moderate enough so diners can place orders and even converse in aural comfort.

We were willing to overlook our latent purism and found that the restaurant's Asian-style-though-not-Asian-formatted food is actually pretty good. But a warning: Pay no attention to the online menu, which still lists rolls named after actual rockers — "Crue," "Axl," "Heart," "Scorpions," even the "Slash" roll we enjoyed as a to-go item from the west Little Rock location a few months ago — that are no longer offered. The prices have increased as well.

One remaining "Headliner" is the Thriller Roll ($12.95), shrimp tempura and cream cheese inside the rice and nori (seaweed) wrapper, topped with baked, shredded surimi (quasi-crab, or as the menu artfully spells it, "krabmeat") crunchy flakes, teriyaki-like eel sauce and spicy mayonnaise.

Though it's more ordinary than thrilling, we did enjoy the taste-and-texture combination, as well as that the pieces were cut just small enough to be able to fit an entire piece into the mouth at one time, which is, we're told, the right way to consume a roll (too many sushi chefs cut those pieces too large).

We paired our Thriller Roll with one of RNR's "Classics," an excellent Spider Roll ($10.95), crisp-fried soft-shell crab, cucumber, avocado and spring mix in a nori wrapper, topped with sweet chile and eel sauces.

We fared even better with non-sushi offerings. The Twisted Tuna ($9.95), one of the appetizer "Greatest Hits," was also one of our greatest hits here. What the menu bills as "our spin on tuna tartare," a sizable pile of chopped spicy red tuna (some of it soft and some of it in chunks) "dammed" by a circular wall of sliced fresh "coolly twisted" avocado, drizzled with more sweet chile and eel sauces.

We also enjoyed our Tuna Tataki ($8.95), seven slices of slightly seared ahi tuna laid out flat on a plate swimming, or at least wading, in tangy ponzu sauce and garnished with white and black sesame seeds. Both this and the Twisted Tuna are enough for light entrees.

If you're looking for something bigger, try the Hibachi Shrimp Solo ($16.95), one of several single-item and combo dishes under the heading "Hibachi Back Stage." The medium-size shrimp, grilled vegetables and mounded fried rice all came in a tangy grill sauce (RNR's side orange-y yum-yum sauce has a decent kick to it and actually complements the food). Our shrimp were a bit chewy, though, indicating that maybe they spent a little more time on the grill than they should have. 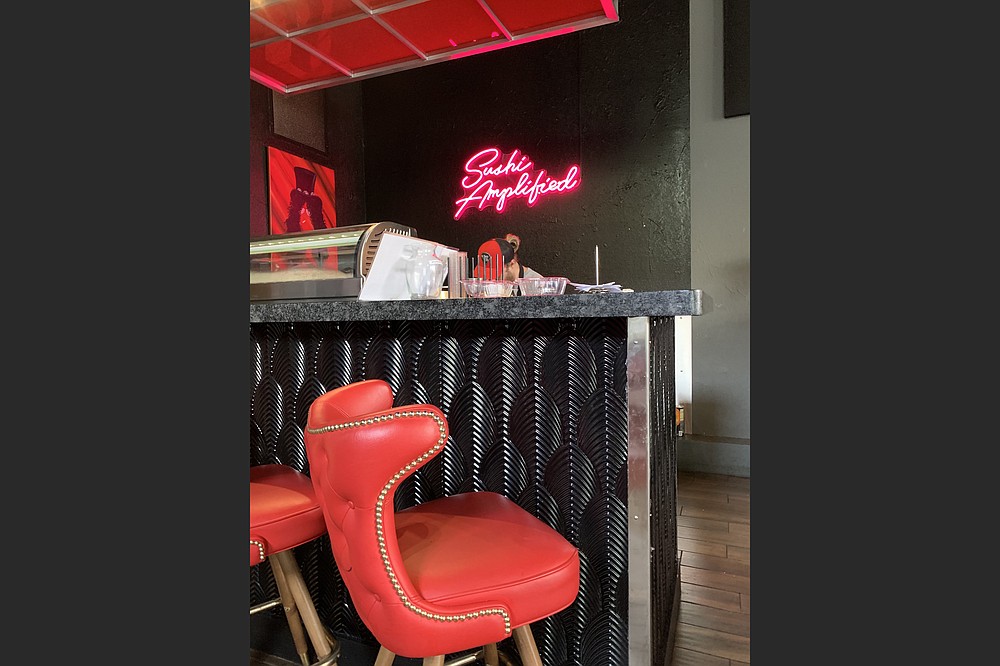 Rock N Roll Sushi franchisees modeled and built the small sushi bar to match the "big" bar, with the same design and even the same materials. (Arkansas Democrat-Gazette/Eric E. Harrison)

We can recommend the miso soup ($2.95), which is much better than the bland to-go concoction we got from the Chenal Parkway location. It has more seaweed and a lot more flavor, although it has the same tiny tofu cubes.

We went with the "traditional" preparation for our Edamame ($4.95) — steamed in the pod — but RNR also grills this soybean appetizer. Steamed, it's kissed with just the right amount of salt, and with a little metal cup of thin teriyaki sauce sprinkled with green onions. It did provide a nice kick for the edamame but made for a somewhat messy finger-food experience.

Service was good over a couple of visits, except that on two occasions we didn't get plates/chopsticks/napkins/soy sauce, which all comes to the table in a package, until after we'd been served with food (that shouldn't happen). And on the two occasions we packed up uneaten food to take home, in plastic clamshell to-go containers, we were neither provided with nor offered to-go sacks, chopsticks, napkins or soy sauce packets. No Asian-run sushi establishments of our acquaintance would let that happen.