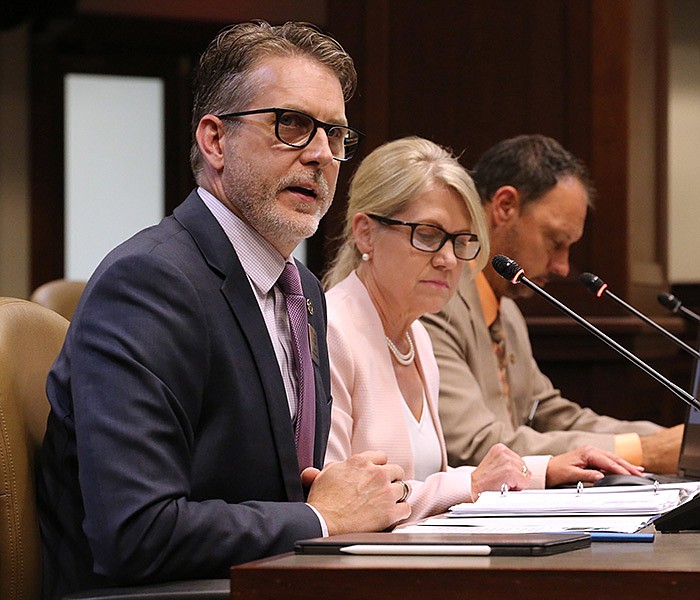 Rex Vines (from left), Arkansas Department of Transportation assistant director and chief engineer; Lorie Tudor, department director; and Steve Frisbee, assistant chief engineer for operations, give an update Thursday on the Interstate 40 bridge closure during a hearing of the Highway Commission Review and Advisory Subcommittee of the Arkansas Legislative Council at the state Capitol. (Arkansas Democrat-Gazette/Thomas Metthe)

Lorie Tudor, the Arkansas Department of Transportation director, took issue Thursday with a senior lawmaker's suggestion that the agency would spend up to $2 million on a consultant to assess its bridge inspection program just to tell its top officials "what they want to hear."

Sen. Jonathan Dismang, R-Beebe, suggested that any consultants the department hires to assess its inspection program "are only going to be as valuable as they are independent. ... They're going to tell you what you want to hear if you're not careful."

"I do not want them, and neither does the [Arkansas Highway Commission] want them, to tell us what we want to hear," Tudor responded. "We want to hear the truth, and I assure you that's what we're aiming for with this consultant."

The exchange took place during a legislative hearing at which Tudor and other agency officials provided lawmakers with an update on the Interstate 40 bridge closing.

The bridge was abruptly closed May 11 when what Tudor said was a "significant fracture" that compromised the integrity of the span was discovered. Its discovery prevented a catastrophe, she said.

A senior agency bridge inspector was fired days later after agency officials learned that the fracture in a 900-foot-long beam had gone undetected in the latest two inspections focusing on the beam and other components that are considered "fracture critical."

The term is applied to components whose failure would cause a bridge to collapse. Most, but not all, bridges have redundancies built into their design to protect the spans' integrity if one or even two or three components fail.

The I-40 bridge remains closed while Arkansas and Tennessee transportation agency officials work to get it repaired. They are not providing a timeline for when the bridge will reopen.

They have worked to improve traffic flow on the Interstate 55 bridge, the remaining span that connects West Memphis and Memphis.

"We're going to get the truth from the Federal Highway Administration," she said. "They're taking an in-depth look from the national level at our program.

"They won't be telling us what we want to hear. They will tell us what we need to hear from not only Federal Highway but also from the Office of the Inspector General."

The purpose of hiring the consultants was to get recommendations from private companies that do bridge inspection work, often with cutting-edge technology, Tudor said.

"We want to hear what they have to say about our program," she said. "What I'd like to hear is that we're perfect, but they're going to tell us how we can improve. Why would we spend $2 million to not be told the truth? I want to hear the truth. So does the commission."

The presentation Tudor and her top deputies provided was identical to the one they gave the commission Thursday. The reaction from members of the Highway Commission Review and Advisory Subcommittee of the Arkansas Legislative Council wasn't as friendly.

The I-40 bridge crisis happened not long after lawmakers completed an exhaustive review of the department's operations, with the idea of improving its efficiency. The most recently concluded regular session of the Legislature codified some of those recommendations into law.

Some lawmakers used the hearing to press Tudor on how many of the recommendations have been implemented from the efficiency study, a figure she was unable to immediately provide.

"If we're going to be hiring more consultants to give us proposed things the department can do to improve processes, particularly as related to bridges, it would help to have some confidence that current recommendations you received from consultants are going to be implemented," said Rep. David Ray, R-Maumelle.

Dismang also asked Tudor to see if she can pay for the consultants with money set aside for economic development projects rather than using regular state revenue that the department receives to focus on road maintenance.

The department received praise from Sen. Keith Ingram. The I-40 bridge is in the West Memphis Democrat's district.

"I think ArDOT is to be commended for standing up and taking responsibility in addressing this in a very quick manner," he told colleagues. "They realized the enormity of what they were dealing with, they worked fantastically with local government."

Ingram supported the agency's decision to pursue outside consultants for ways it can improve bridge inspections. 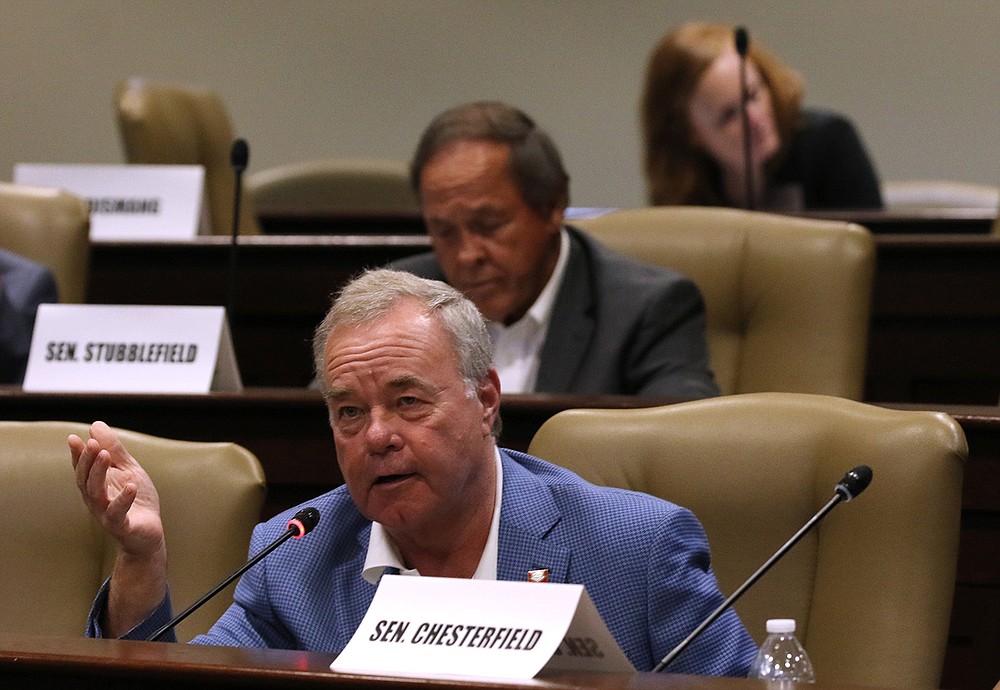 Sen. Keith Ingram, D-West Memphis, asks a question Thursday at the state Capitol to Arkansas Department of Transportation Director Lorie Tudor during a hearing of the Highway Commission Review and Advisory Subcommittee of the Arkansas Legislative Council. (Arkansas Democrat-Gazette/Thomas Metthe)