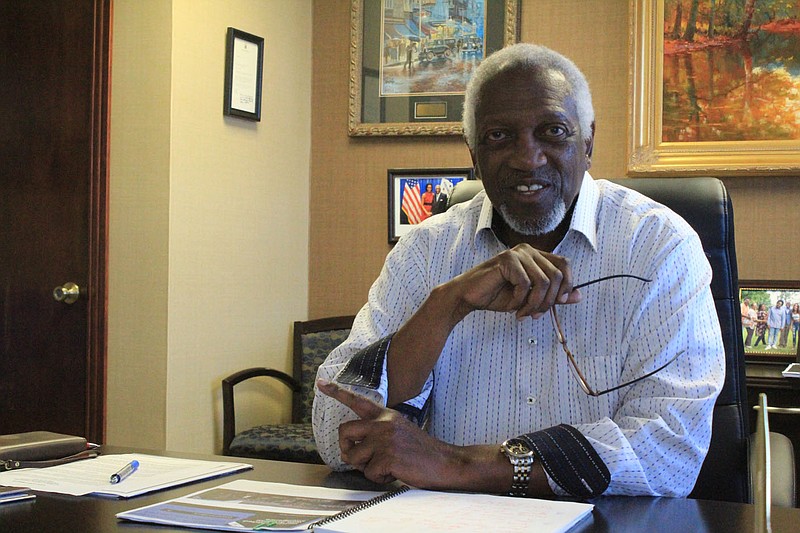 Fort Smith Mayor George McGill discusses the significance of Juneteenth and his office's celebration of the holiday Wednesday, June 16, 2021, inside his office.

FORT SMITH -- George McGill has always known the significance of Juneteenth, but the holiday wasn't widely celebrated when he was growing up.

McGill, the city's first Black mayor, grew up in Fort Smith in the 1950s and 1960s, which was decades before Congress commemorated Juneteenth in 1997. Juneteenth, which falls on June 19 each year, celebrates the end of slavery in the United States.

McGill's office Saturday is hosting a Juneteenth celebration. It will be the first one led by a city office in Fort Smith to the best of his knowledge, McGill said.

The celebration will be on the heels of President Joe Biden signing into law a bill recognizing the date as a federal holiday.

"We need to be recognized as a city of progress," McGill said.

Juneteenth commemorates June 19, 1865, when Union Maj. Gen. Gordon Granger traveled to Galveston, Texas, to proclaim the end of slavery in the state. Granger's proclamation came almost three years after President Abraham Lincoln's Emancipation Proclamation, which outlawed slavery in much of the South.

Davis is the scheduled keynote speaker for the city's event Saturday.

In Fort Smith, the holiday was recognized in recent years through the efforts of Andre Good, Ward 2 city director, and others at Juneteenth Planning Commission Incorporated who put books on diversity in schools and libraries, and through the George Fisher Memorial Scholarship for high school and college students. The commission also organized and led a community celebration of the holiday.

The holiday gained national attention last year following the murder of George Floyd by a Minneapolis police officer on May 25, 2020.

"All of the sudden, it's like, 'Wow, my life has changed from this moment to that moment,' but you have a country, though, that has not quite embraced that, and that's part of the long journey as well," Davis said.

McGill said he was approached by residents asking if the city would do something for Juneteenth in 2021. Good is happy to see the mayor's office take the lead on the event but would like to see the city as a whole formally recognize the date. He pointed to the Fayetteville City Council, which on June 1 passed an ordinance to recognize Juneteenth as a city holiday.

Good said "the last thing" he wants is resistance to the holiday from the Board of Directors or city administration.

"Personally, I am in favor of making Juneteenth a city holiday since it celebrates the day the last enslaved people learned they were free," City Administrator Carl Geffken said.

Richardson said the event "speaks to the leadership in the city."

"To see the mayor and his staff take the lead on this is pretty cool," he said.