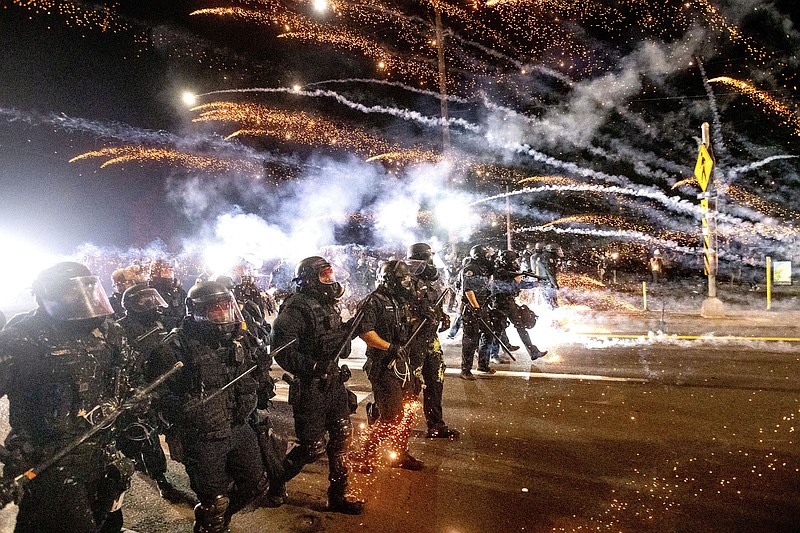 Police use chemical irritants and crowd control munitions to disperse protesters during a demonstration in Portland, Ore., in September. Officers on a rapid response team have resigned after one was charged with striking a protester last year. (AP/Noah Berger)

PORTLAND, Ore. -- Officers who serve on a specialized crowd control unit in Portland, Ore., that has responded to the city's ongoing, often violent protests have resigned en masse after criminal charges were filed against a team member.

The Oregonian/OregonLive reports the officers on the Rapid Response Team voted to resign from the team during a meeting Wednesday night.

The move by officers and sergeants to disband their own team occurred a day after a member, officer Cody Budworth, was indicted, accused of fourth-degree assault stemming from a baton strike against a protester last summer. A year ago, about 70 members were on the team.

The resignations were first reported by radio station KXL. A team lieutenant called Police Chief Chuck Lovell to inform him the members of the team, who serve voluntarily in the assignments, voted to resign because of a perceived lack of support from City Hall and the district attorney over the past year, according to the mayor's office and officers.

[Video not showing up above? Click here to watch » https://www.youtube.com/watch?v=FtZKRTL8YrU]

The team has been on the front lines at social justice protests held in the city after the May 25, 2020 killing of George Floyd, a Black man who died after a Minneapolis police officer knelt on his neck and pinned him to the pavement.

Many demonstrations devolved into clashes with officers late at night, and at times, ended with vandalism, property damage and fires. The crowd control team was the unit often directed to disperse crowds after police declared unlawful assemblies or riots.

Their use of force has led to a number of civil lawsuits in state and federal court, sanctions from a judge and now an indictment.

In late October, the president of the police union sent the mayor and police chief a letter, urging both to "stand up and publicly support Police Bureau members who voluntarily serve on the Rapid Response Team."

"Our [Rapid Response Team] members do not volunteer to have Molotov cocktails, fireworks, explosives, rocks, bottles, urine, feces and other dangerous objects thrown at them," wrote Daryl Turner, then-president of the Portland Police Association.

He noted that the team members volunteer for the work without any specialty pay.

Budworth marked the first Rapid Response Team officer to face criminal prosecution stemming from force used during a protest. The police union has called the prosecution politically driven and claimed that Budworth's baton "push" to a woman's head was accidental.

Also this week, authorities said a Portland Police Bureau detective is under review by the Oregon Department of Justice for possible criminal charges related to use of force at last year's racial justice protests.