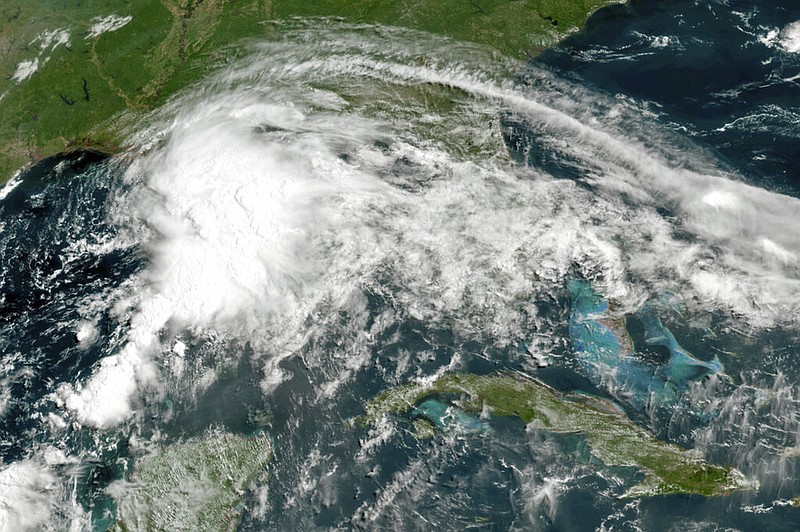 This GOES-16 GeoColor satellite image taken at 10 a.m. Friday, June 18, 2021, and provided by NOAA, shows a tropical weather system in the Gulf of Mexico. (NOAA via AP)

NEW ORLEANS — A disorganized storm system carrying tropical storm-force winds churned through the Gulf of Mexico toward the Southern U.S. on Friday, lashing coastal communities with bands of rain, threatening Father’s Day tourism business and forcing the postponement of Juneteenth celebrations in Mississippi and Alabama.

Forecasters said the broad system was moving north over the Gulf of Mexico with maximum sustained winds of 45 mph, which is above the tropical storm threshold of 39 mph. It hadn’t been designated a tropical storm as of Friday afternoon, however, because it lacked a single, well-defined center, said Benjamin Schott, meteorologist in charge at the National Weather Service office in Slidell, La.

The looming weather imperiled Father’s Day weekend commerce in tourism areas already suffering economic losses caused by the coronavirus pandemic. A swamp tour company in Crown Point, Louisiana, canceled afternoon tours Friday and was afraid it would have to do the same for Saturday.

Austin Sumrall, the owner and chef at the White Pillars Restaurant and Lounge in Biloxi, Miss., had 170 reservations on his books for Sunday, but was concerned that some patrons would cancel. “We saw, especially last year, the rug can get jerked out from under you pretty quickly,” he said.

“I hope it just gets in and gets out,” said Greg Paddie, manager of Tacky Jack’s, a restaurant at Alabama’s Orange Beach.

Mayor Jeff Collier of Dauphin Island, off Alabama’s coast, said officials there had already contacted debris removal contractors and made sandbags available to residents. “We’re pretty well prepared to the extent that we can be,” Collier said. “This is not our first rodeo.”

In nearby Mobile, Ryan Schumann, president of the Alabama Deep Fishing Rodeo on nearby Dauphin Island, could at least take solace in the fact that the event is scheduled for next month, not this weekend.

But disappointment was evident in the voice of Seneca Hampton, an organizer of the Juneteenth Freedom Festival in Gautier, on the Mississippi Gulf Coast. He spent weeks arranging food trucks, vendors, a bounce house, face painting and free hamburgers and hotdogs for the event, which was highly anticipated because last year’s was canceled due to the pandemic and because of Juneteenth’s new designation as a federal holiday.

“It’s something that means a lot to people, and there were people that were bummed out, like ‘I already had in my mind I was coming out there to celebrate,’” said Hampton.

By midday Friday, brisk winds and bands of rain were hitting the coast from south of New Orleans to Pensacola, Fla. An afternoon advisory from the National Hurricane Center said the system was about 165 miles south of Morgan City, La., and was moving north at 14 mph.

In Louisiana’s vulnerable Plaquemines Parish, the local government warned mariners that locks and a floodgate in the Empire community, near where the Mississippi River meets the Gulf, would close at noon. Health officials ordered oyster harvesting areas closed along much of Louisiana’s coast due to possible storm-driven pollution.

Louisiana Gov. John Bel Edwards issued a state of emergency late Thursday. The move is an administrative step that authorizes the use of state resources to aid in storm response efforts.

Forecasters said the system could produced up to 12 inches through the weekend along the central U.S. Gulf Coast.

In Orange Beach, Paddie said Tacky Jack’s still has sandbags left over from its preparations for last year’s Hurricane Sally. That September storm, blamed for two deaths, threw ships onto dry land, knocked out power to hundreds of thousands of people in Alabama and in the Florida panhandle.

There have already been two named storms during the 2021 Atlantic hurricane season. Meteorologists expect the season to be busy, but not as crazy as the record-breaking 2020 season.

Mexico, while getting rain from the storm in the Gulf, was also threatened by a storm in the Pacific. Tropical Storm Dolores formed Friday morning and was expected to make landfall on Mexico’s west-central coast Saturday evening, possibly near hurricane strength, according to the National Hurricane Center.