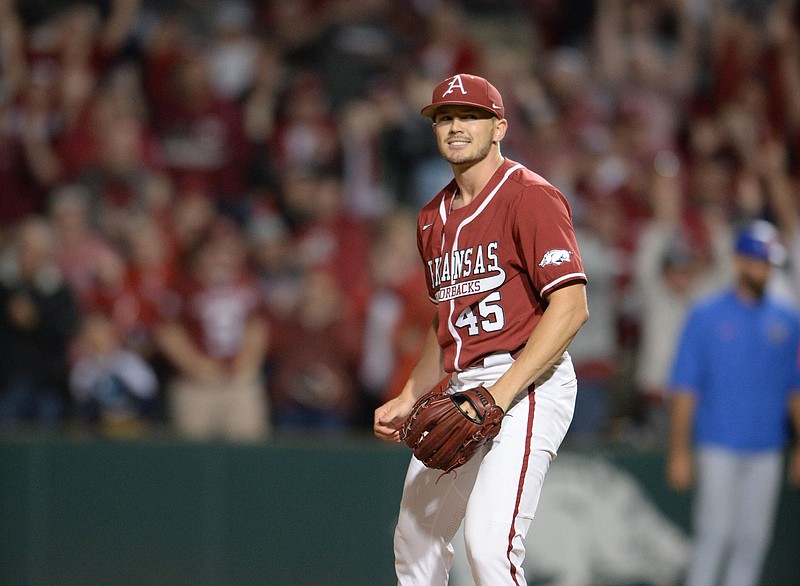 Arkansas reliever Kevin Kopps celebrates Friday, May 21, 2021, after the final out of the top of the ninth inning of play against Florida at Baum-Walker Stadium in Fayetteville. (NWA Democrat-Gazette/Andy Shupe)

FAYETTEVILLE -- Kevin Kopps wasn't certain he'd be wanted back for his bonus senior season at the University of Arkansas after the pandemic-shortened 2020 year.

Arkansas pitching coach Matt Hobbs persuaded him to stay, and now Kopps has a trophy case bulging with major awards to show for it.

Kopps on Friday was awarded the Dick Howser Trophy, given by the National Collegiate Baseball Writers Association to the best college baseball player in the country. He also was selected as the Stopper of the Year by the same organization.

Kopps is the first relief pitcher to win the Howser Trophy, which has been given since 1988 and has received the nickname "The Heisman Trophy of college baseball."

Speaking on a video conference, Kopps said his decision to return hinged on whether the Razorbacks would have him back after his poor performance in the shortened season.

"After the season, I was kind of unsure of who I am and if they wanted me back or if they wanted to make room for some younger guys," Kopps said. "So I was just trying to make that decision in the summer, and Coach Hobbs thought it was stupid of me to ask it. I'm really thankful for that."

[Video not showing up above? Click here to watch » https://www.youtube.com/watch?v=Ea-wQRLGeco]

Voted a three-time captain by his teammates in 2019, '20 and '21, Kopps harnessed his focus into a balance of mind, body and spirit this season and unleash a pitch -- a "slider-cutter" thrown from various angles -- that allowed him to dominate the highest level of college baseball.

"Such a great leader on and off the field," Arkansas Coach Dave Van Horn said. "His performance this year was something that I've never really witnessed.

"First off, him coming back from injury a couple of years ago to winning award after award. So dependable, great in the clubhouse, just a pleasure to be around. I don't know if we'll ever witness this again."

He stacked the Howser Trophy and the Stopper of the Year Award, given to the nation's best relief pitcher, on top of college player of the year awards from the National Baseball Foundation and Collegiate Baseball, and SEC pitcher of the year honors. He had 11 saves to go along with his 12 wins, meaning Kopps figured in statistically on nearly half of the Razorbacks' 50 wins.

Kopps' cutter, thrown with what he called "gyroscopic" action, was his calling card.

"I've always worked on my cutter," Kopps said. "But I think confidence is the biggest thing this year. I started working on that a lot this summer, just like starting to appreciate who I am versus looking at things I didn't like about myself."

Kopps told the MLB Network that he first learned about the "cutter," or cut fastball, during his high school career at George Ranch High outside Sugar Land, Texas.

"An old Astros pitcher, John Hudek, taught me in high school," Kopps told MLB Network. "I try to shape it, depending on the hitter, lefty-right or where I am in the count. I kind of shape it more like a slider, and I'll turn it more into a slider the deeper I get into counts. Early on, I throw it more like a cutter to get some contact.

"It's kind of hard to explain. I feel like I'm throwing a cutter, but when I want to get more depth to it, like more of a curveball action, I feel like I get on top of it more. It's just how it kind of comes out."

Van Horn said he and the coaching staff noticed early in the academic year -- during fall ball, then in January and February -- that Kopps' command of the cutter was sensational.

"We knew that Kevin was a lot better, and then standing near a dugout during scrimmages and hearing hitters come back kind of mumbling to themselves, saying things like, 'Man I can't stand hitting off Kevin,' we kind of knew we had something going there."

Kopps has been well respected and admired by his UA teammates throughout his six seasons, which included a year off in 2018 while rehabbing from Tommy John surgery. However, he had trouble finding a consistent level of performance in some years after compiling a 3-1 record with a 3.31 ERA and 2 saves in 49 innings as a freshman in 2017.

In 2019, Kopps made a team-high 30 relief appearances and had a 3.89 ERA and 6-3 record in 41 2/3 innings for a team that advanced to the College World Series for the second consecutive year.

A renewed commitment to his diet, including beet juice, and his workout regimen helped Kopps rebuild his confidence.

"I started to focus on recovery and what I put in my body a lot more," he said. "I kind of always had focused on that, but starting in the summer after that season I really started to thin myself out and get myself into a lot better shape and really focus on stamina for myself. Because it's something I really struggled with after surgery. So I really pushed hard for that to make sure I was ready for the season."

Kopps allowed a run in the season-opening 13-9 win over No. 3 Texas Tech in Arlington, Texas, then gave up just one earned run in his next 13 outings, covering 24 innings.

Van Horn and Hobbs also began getting lengthier outings and multiple appearances per weekend from their relief ace.

"I don't really sense the magnitude of it, to be honest," Kopps said. "I actually didn't know I did that until someone told me. During the season, I really didn't pay attention to my stats or anything at all. I didn't really like to, I've never really liked to. But it's hard when people keep reminding you of it."

Said Van Horn: "I didn't realize it at the time either, but I started hearing some guys talk about it in the dugout. From a coach's perspective, we just knew that every time we put Kevin in there for a while, that nobody was scoring. And he wasn't giving up very many hits.

"We would talk after the games amongst ourselves about how consistent he was and just the fact that we have so much confidence in him. But yeah, those are amazing numbers."

Kopps said winning national awards has made him reflect back on his full career and the work he put in to make himself better.

The biomedical engineering major, who also has a business degree, was asked what he planned to do after his baseball career.

"Honestly, I've been really interested in prosthetics," Kopps said. "I know that people have tried making artificial UCLs and ACLs, but they haven't really worked out. Those are kind of the two fields that I'm interested in and would like to pursue after baseball."