Basketball is non-stop on Bozeman's mind 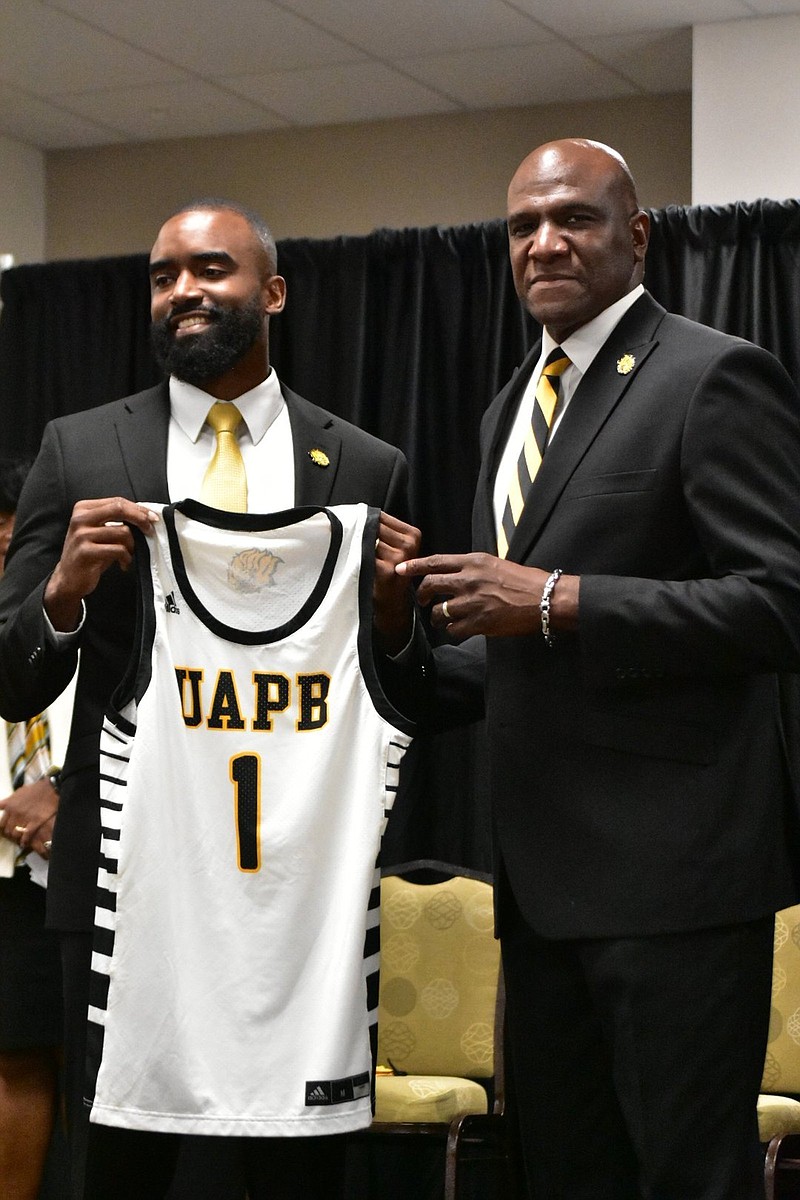 The morning after his son was introduced as the next men's basketball coach at the University of Arkansas-Pine Bluff, Eric Bozeman got a phone call at 6:15 a.m.

"Solomon had a recruit he wanted to talk to me about," the elder Bozeman said. "It sounded like he had been up a while. I sounded like I just woke up because he woke me up."

Days starting as early as 3 a.m. are routine for Solomon Bozeman, the 33-year old UAPB hired on June 11. In the dark hours of the morning, he'll scribble down and plan workouts, using the quiet time to consider the day ahead. During the season, Bozeman is in the gym no later than 6 a.m. And sometimes, he phones his father for an early morning chat about a potential a prospect.

"I heard Eric Musselman calls his assistants at 4 a.m. too," said Eric Bozeman, now in the 34th year of his own coaching career. "Solomon's got bundles of energy. You know, a lot of guys work, but it's a different kind of work with him."

Everyone, it seems, has a story about Solomon Bozeman's work ethic.

At Oral Roberts, Coach Paul Mills can still hear the bouncing basketballs from Bozeman's early morning practice sessions inside the Mabee Center. Former University of Arkansas at Little Rock coaches Steve Shields and Wes Flanigan recall a player they had to keep from dragging teammates into the gym at all hours. Abilene Christian's Brette Tanner, who was an assistant there with Bozeman from 2014-16, remembers a relentless recruiter who once totaled former coach Joe Golding's car for the sake of a recruiting trip. Sherri Bozeman-Brown knows her son is home when she hears her shower running at 3:30 a.m. as he begins his work day.

The son of a longtime college basketball coach and a dedicated United States Postal Service worker, Bozeman's motor has powered a precipitous rise from his beginnings as an assistant earning $10,000 to head coach in seven short years. The constant drive has led to success in every role he's held. Now Bozeman carries it with him home to Arkansas and into his toughest challenge yet, taking over a UAPB program with just one winning season since 2010.

It seems everyone who knows him is confident this uncommon worker has what it takes to succeed here too.

"Solomon is -- and we use this term around here -- he is a 'most faithful wind,'" Mills, who led Oral Roberts to the Sweet 16 with Bozeman on his bench in 2021, said. "He's someone who is going to show up every day, not just occasionally. Solo is one of those faithful guys."

Bozeman didn't grow up around basketball. He grew up in it.

During Bozeman's childhood, his father held coaching roles at Henderson State, Ole Miss and Southern Arkansas University. At each stop, the elder Bozeman who now coaches at Itawamba Community College in Mississippi was conscious to never sacrifice family for his work.

Hanging with his dad in gymnasiums in Arkadelphia, Oxford, Miss., and Magnolia, the younger Bozeman came to understand the intensity of elite college basketball before the age of 10. In Oxford, he stood close to the fire of an SEC program on a daily basis. And in each place, Bozeman got to see his father -- the first black head coach with his programs at Henderson State, Southern Arkansas and later Northwestern Oklahoma State -- go to work.

When he began coaching at the ripe age of 26 years old, he entered with a wisdom and gravitas well beyond his years.

"Him having the experience with his dad in basketball, I think he had an opportunity that very few people ever get," Mills said. "He got to see it up close."

If Bozeman's gained a basketball education from his dad, his drive to work came from his mother.

While the elder Bozeman jumped from one coaching job to the next, often bringing his son with him, Bozeman-Brown remained home in Little Rock and built a 35-year career with the Postal Service -- working through rain, sleet and snow as a clerk, then a letter carrier and finally as a manager. Like her son, Bozeman-Brown rose early and stayed late, often working through holidays and vacations, and her ethic flowed down to her son.

"She's the reason I wake up every morning at 3 or 3:30 every morning," Bozeman said during Wednesday's news conference.

"He lives and eats whatever he's doing," Bozeman-Brown said. "I did that too."

As a player at UALR, he often beat Shields to the arena in the morning and drew comparisons to former Trojan and five-time NBA champion Derek Fisher for his devout commitment to the details, ranging from fundamentals to rest to nutrition and hydration.

The mentality yielded results -- Bozeman was named Sun Belt Conference Player of the Year in 2011 while leading UALR to the conference title and an NCAA Tournament appearance -- and earned respect from his teammates.

"He was the leader," Shields said. "Solomon was the guy that everybody looked up to."

Following a three-year professional career that included stints in North Macedonia, Ukraine and Estonia, Bozeman retired and joined Golding's staff at Abilene Christian in 2014. Arriving just one year after the Wildcats moved into Division I, he found his humble beginnings as the program discovered its own, and became a sponge.

"He just wanted to learn," Tanner said. "He wasn't afraid to bug me and the other coaches when he had questions."

Working next to Tanner and Golding, Bozeman first flashed his tireless drive for recruiting and a knack for inking impact prospects, a skill he's already flexed at UAPB with a flurry of commitments since his hiring. Bozeman's dueling commitment to recruiting and his desire to be in the gym with his players crossed one night on a trip home from Oklahoma City, when he chose to drive through the night and ended crashing the beat-up Toyota Camry Golding's assistants used.

"It was [a] blessing because he wasn't hurt," Tanner said. "But that car really needed to be put to rest."

In Bozeman, Tanner spotted an up and comer who created genuine connections with players and triggered responses from them, whether he was sitting in a living room convincing one to come to Abilene or coaching another on campus. And over his seven years as an assistant, Bozeman made a habit of securing recruits who were often coveted by bigger and better programs, with Arkansas prospects Jaylen Franklin, R.J. Glasper and Issac McBride among them.

"He's a natural at it," Tanner said. "He really has a unique ability in recruiting. A lot of coaches try but it just comes off as fake. With Solomon, these kids know that he truly does care about them."

"He would often see a player who was down and say, 'Hey, what can I bring you for lunch tomorrow?'" Mills said. "He would just listen to them. Not try to talk them through anything. Good coaches listen more than they preach."

But the full gyms were what stood out the most to Mills, and are also what make him confident in Bozeman's future as a head coach.

Most in-season mornings during Bozeman's three years at Oral Roberts, Mills arrived to the arena and already heard balls bouncing. Like clockwork, he said, Bozeman was there at 6 a.m. with him a collection of players, all of them there to looking to feed off of his energy and to get better.

There was something infectious about the determined early riser.

"I don't know many teenagers looking to work out at 6 a.m.," Mills said. "But there was an affinity for Solomon. He has that pull."