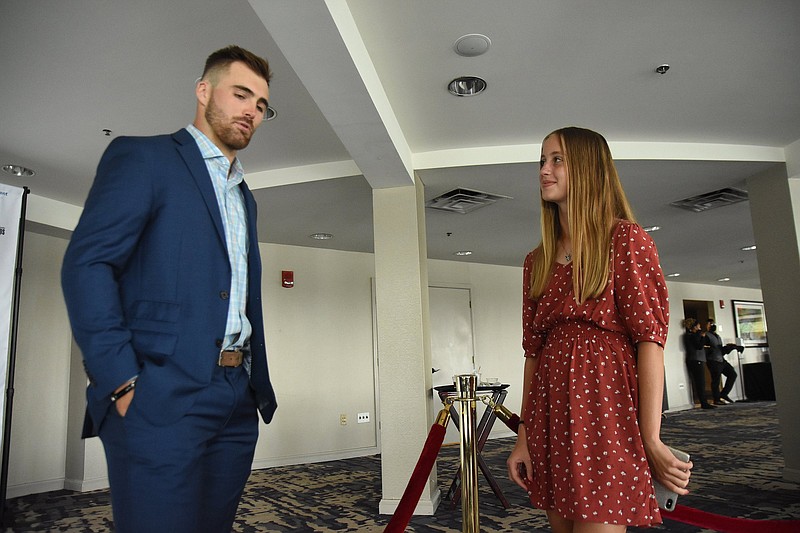 Buffalo Bills quarterback Jake Fromm (left) talks with Devyn O’Daniel, a Class 6A All-State cross country honoree from Bentonville, before the All-Arkansas Preps Awards Banquet on Saturday at the Statehouse Convention Center in Little Rock. Fromm was the the keynote speaker at the ninth annual event. (Arkansas Democrat-Gazette/Staci Vandagriff)

Jake Fromm knew he'd be in the heart of Razorback country when he was asked to be the keynote speaker at the ninth annual Arkansas Democrat-Gazette All-Arkansas Preps Award Banquet on Saturday night at the Statehouse Convention Center in Little Rock. But the Buffalo Bills quarterback didn't hesitate when accepting the invitation to fly to Little Rock to address a room full of student-athletes, coaches and their families – many of whom are die-hard University of Arkansas fans.

Besides, he's got a pretty good relationship with guy who's leading the Razorbacks football program.

"It was last minute for sure, but when my marketing team mentioned it, I was like 'why not go to the great state of Arkansas,' " said Fromm, a former University of Georgia quarterback who stepped in to speak after Major League Baseball Hall of Fame shortstop Ozzie Smith couldn't make it. "I was excited about it actually, especially when it's to celebrate high school young people and their achievements. Of course, it's Coach [Sam] Pittman's home state now, too.

"He was literally one of my rocks when he was an assistant coach at Georgia for sure. I was really excited to see, one, him get a head-coaching job, and two, have the success that he's had. I'm so thankful for the memories and the wisdom he's given me. I'm rooting for him more than anybody."

This year's banquet was a stark contrast to the one held in 2020 when health and safety reasons pertaining to the coronavirus pandemic forced the event to be held virtually on Facebook. In addition, spring sports were not included in last year's show after covid-19 forced those seasons to be canceled.

However, a sold-out crowd inside the Wally Allen Ballroom was proof enough to show just how good it felt for many to return to a sense of normalcy.

"It good to be a normal player again," Fromm said. "Dealing with covid was tough last year for everybody, but things are getting better for all of us."

Outstanding players and coaches of the year were again recognized for the jobs they did in their respective sports, including a trio of winners for the overall male (Austin Ledbetter of Bryant) and female (Blakelee Winn of Pea Ridge) athletes of the year as well as the overall coach of the year (Brian Glass of Prescott). There were two other noteworthy awards handed out to three student during the banquet that also centered around their lives outside of sports.

But before Ledbetter, Winn, Glass, McMinn, Jennings and Chambers received their recognitions, all eyes were on the 22-year-old Fromm, who is no stranger to being called upon in an emergency.

During the first game of his true freshman year at Georgia in 2017, he was forced into action when then Bulldogs' starting quarterback Jacob Eason went out with a knee injury in the first quarter against Appalachian State. Fromm, who went on to throw for 143 yards and a touchdown to lead Georgia to a 31-10 victory, never relinquished that No. 1 slot until the end of his junior year, when he made the decision to skip his season senior and declare for the 2020 NFL Draft.

After being picked by Buffalo in the fifth round as the No. 167 overall pick, the Bills made him their emergency covid-19 quarterback, which essentially meant that Fromm, the Bills' third-string signal-caller behind starter Josh Allen and backup Matt Barkley, would occasionally practice away from his other teammates so that the team would have a quarterback available in case there was a covid-19 outbreak at the position.

"It was a crazy role for sure", said Fromm, who passed for 8,224 yards and 78 touchdowns during his three-year career at Georgia. "There was no real blueprint for it because it was kind of new to everybody. It was definitely new to me. But hey, they gave me a role, gave me a job, and I wanted to do the best that I could with it.

"I tried to take it as seriously as I could, and I wanted to be ready and prepared if, God forbid, something did happen. I just tried to stay ready, but I'm really excited to finally be a normal football player this season."

It doesn't appear the Bills would be forced to use Fromm in a similar role this year, particularly with the NFL, for the most part, returning to its usual operations. But that doesn't necessarily mean that Fromm will have an easier time moving up the depth chart, especially after the moves Buffalo made in the offseason.

After signing Davis Webb to a reserves contract in January, the Bills added former Chicago Bears quarterback Mitchell Trubisky in March. Buffalo, which won the AFC East last season and lost in the conference title game, didn't draft a quarterback or sign one during free agency so that does bode well for Fromm. But he's not interested in taking anything for granted. In his eyes, he's got work to do.

"We just finished our [organized team activities], and we're going to break here for five weeks, but there's a lot of work to be put in between now and when we play," said Fromm, who will also be getting married in the coming weeks. "So after that, we'll get ready to go into camp. But I'm ready to go to work, compete and give the team everything that I can give them and help out any way I can."

One of Fromm's messages to the honorees on Saturday echoed that same mindset.

"I was never going to let anyone outwork me," he told those in attendance. "You've got to put in the work and have faith that things will work out in your favor."

Outstanding Players of the Year

Overall Athletes of the Year

Outstanding Coaches of the Year

Overall Coach of the Year