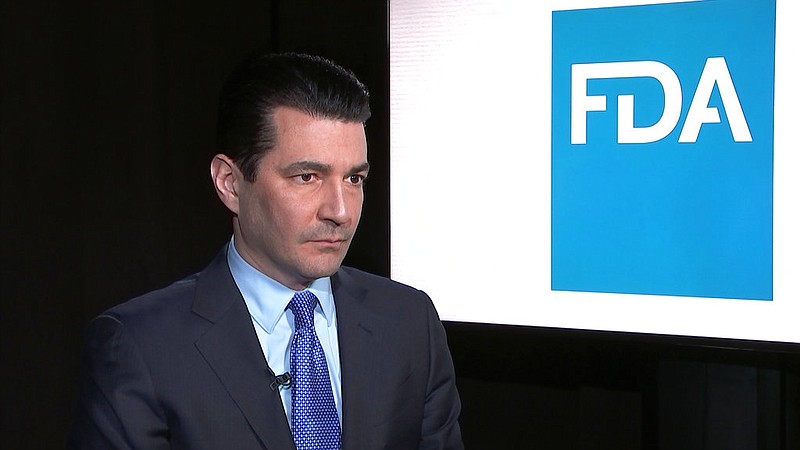 Scott Gottlieb, then the commissioner of the Food and Drug Administration, listens during an interview with The Associated Press in New York in this March 5, 2018, file photo. (AP/Kathy Young)

LONDON -- As some governments and pharmaceutical officials prepare for covid-19 booster shots targeting more-infectious virus variants, health authorities say it's too early to tell if they will be required.

"We do not have the information that's necessary to make the recommendation on whether or not a booster will be needed," Soumya Swaminathan, the World Health Organization's chief scientist, said Friday. The "science is still evolving."

Such a call is "premature" while high-risk individuals in most of the world haven't yet completed a first course of vaccination, Swaminathan said. Data from countries introducing precautionary extra inoculations later this year -- particularly for vulnerable people whose immunity to the virus may wane faster -- will inform WHO's guidance, she said.

Covid-19 booster shots are likely to be rolled out in the U.K. in the fall to avoid another winter surge. Seven different vaccines are being tested in volunteers in England in the world's first booster study, Health Secretary Matt Hancock said last month.

The U.K., which has inoculated a larger proportion of people than any other major economy, has been forced to delay a planned lifting of coronavirus restrictions amid a resurgence of cases driven by the delta variant. The strain, first reported in India, is the most infectious reported to date.

More-transmissible variants, including the beta strain that emerged in South Africa, require higher antibody levels to prevent infection, prompting vaccine makers including Pfizer Inc. and Moderna Inc. to test whether tweaked versions of their existing shots will provide broader immunity.

[Video not showing up above? Click here to watch » https://www.youtube.com/watch?v=PTBfut38bS8]

One dose of Novavax Inc.'s variant-directed vaccine may provide sufficient protection against the beta strain in individuals previously immunized against covid-19, according to pre-clinical research released this month by scientists at the Gaithersburg, Md.-based company and the University of Maryland School of Medicine.

The modified shot also has the potential to provide broad protection against various strains if used as a primary vaccine regimen, said Gregory M. Glenn, Novavax's president of research and development, in a June 11 statement.

So far, the existing U.S.-approved vaccines work well enough to protect against beta, delta and two other strains that the WHO has designated as variants of concern, said Francis Collins, director of the National Institutes of Health.

"Nobody is saying you need a booster today," Collins said in an interview with biologist Lee Hood at the Precision Medicine World Conference Thursday. "But boosters might very well be in our future at some point, and they might be here sooner if other variants pop up" that aren't covered as well by existing vaccines.

As a minimum, vaccines will need to protect against hospitalization, ICU admission and death, according to Paul Offit, director of the Vaccine Education Center at the Children's Hospital of Philadelphia. "With that bar, we probably would need a vaccine maybe every three to five years," he said in a STAT biotech podcast on Thursday.

Immunization with a combination of vaccines may offer longer immunity or fewer side effects for certain individuals, Offit said.

Early data from the U.K., Spain and Germany suggest a "mix-and-match" regimen using two different types of vaccines generates more pain, fever and other minor side effects compared with two doses of the same inoculation, the WHO's Swaminathan said.

Combinations of the AstraZeneca PLC and Pfizer-BioNTech shots are being considered in Malaysia, where the government is trying to speed up immunizations to achieve population-level immunity by year-end, Science, Technology and Innovation Minister Khairy Jamaluddin said Wednesday.

"It seems to be working well, this concept of heterologous prime-boost," Swaminathan said. "This opens up the opportunity for countries that have vaccinated people with one vaccine and now are waiting for the second dose they have run out of, to potentially be able to use a different platform vaccine."

In the U.S., the more contagious delta variant could spur a fall surge in coronavirus infections if only 75% of the country's eligible population is vaccinated, former Food and Drug Administration chief Scott Gottlieb said Sunday.

While Gottlieb cited one projection forecasting an increase in infections reaching as high as 20% of last winter's peak, he called that an "aggressive estimate," saying he doesn't "think it'll be quite that dire." But he said states with low vaccination rates are already showing a concerning rise in cases with the spreading of delta, which is up to 60% more contagious than earlier variants.

"So Connecticut, for example, where I am, shows no upsurge of infection, but Mississippi, Alabama, Arkansas, Missouri show very substantial upsurges of infections. That's based entirely on how much population-wide immunity you have based on vaccination," Gottlieb said on CBS' "Face the Nation" program.

Gottlieb, who serves on the board of directors of Pfizer, urged a renewed vaccination push closer to the fall, as people prepare to return to school and work, when he said they may be more open to the shots.

President Joe Biden will travel to Raleigh on Thursday, visiting the capital of North Carolina as part of his continued efforts to encourage people across the country to get the covid-19 vaccine.

The visit comes as part of Biden's "National Month of Action," a nationwide sprint in June to get 70% of adults at least partially vaccinated by July 4.

But two weeks out from that date, the Centers for Disease Control and Prevention report that roughly 65% of adults have received at least one dose of the covid-19 vaccine.

And in North Carolina, that figure is significantly lower. As of June 18, the North Carolina Department of Health and Human Services reports that just 55% of adults in the state have received a dose of the vaccine.

Earlier this month, The News & Observer reported that at its current pace, the state will not reach Biden's vaccine target until November.

Gov. Roy Cooper and other North Carolina officials have implemented various incentives in an effort to drive up the vaccination rate, with Cooper announcing this month that the state would offer a $1 million cash prize to four randomly selected North Carolinians who have received the vaccine. Several states have tried similar drawings.

But in spite of these efforts, Cooper said Friday that the state had not seen a significant increase in new vaccinations.

"We're hoping over the next few days and few weeks that we will see some significant improvement in our numbers," he said at a news conference in Johnston County.

Biden's visit to the state attempts to revitalize those numbers.

Among Americans who have gotten vaccinated, there are many wondering if they have enough antibodies to keep them safe from the virus.

For a vast majority of people, the answer is yes, but that hasn't stopped people from lining up for antibody testing. The catch is, vaccinated people have to get a specific kind of test, and at the right time, to get a reliable answer.

Many commercial tests were designed to look for antibodies to a coronavirus protein called the nucleocapsid, or N, because after infection, those antibodies were plentiful in the blood. But antibodies to the N protein are not produced by the vaccines authorized in the United States; instead, those vaccines provoke antibodies to another protein sitting on the surface of the virus, called the spike.

It is also important to wait to be tested at least two weeks after the second shot of the Pfizer-BioNTech or Moderna vaccines, when antibody levels will have risen enough to be detectable. For some people receiving the Johnson & Johnson vaccine, that period may be as long as four weeks.

Actually, scientists would prefer that the average vaccinated person not get antibody testing at all, on the grounds that it is unnecessary. In clinical trials, the vaccines authorized in the United States provoked a strong antibody response in virtually all the participants.

"Most people shouldn't even be worrying about this," said Akiko Iwasaki, an immunologist at Yale University.

But antibody tests can be crucial for people with weak immune systems or those who take certain medications -- a broad category encompassing millions of people who are recipients of organ donations, have certain blood cancers or take steroids or other drugs that suppress the immune system. Mounting evidence suggests that a significant proportion of these people do not produce a sufficient antibody response after vaccination.

Information from this article was contributed by Jason Gale of Bloomberg News; by Julian Shen-Berro of The News & Observer; by Jeanne Whalen of The Washington Post; and by Apoorva Mandavilli of The New York Times.