Bears not holding back on conditioning 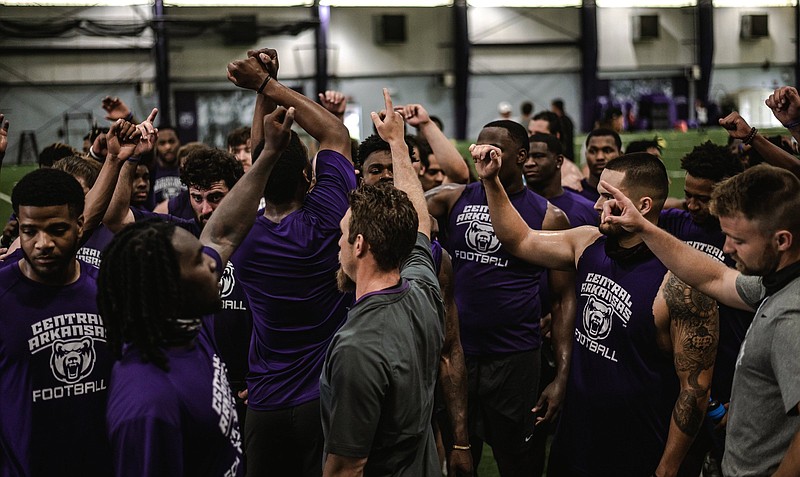 CONWAY -- There's just one fan whirring on the far side of the University of Central Arkansas' indoor football practice facility.

While the shade is better than nothing on a sunny June afternoon, it's not much of a reprieve -- garage doors on both sides are open, letting the 90-plus degree heat in and the humidity only makes it worse.

Every Bear is dripping, their purple t-shirts getting a shade darker by the second.

At this time a year ago, UCA's football team wasn't on campus. The Bears had just more than a month to get ready for their late August season opener.

The shortened ramp-up period worried Fotioo -- not just because there was the increased possibility of injuries but also because he wanted his young players to be ready for the intensity of an FCS season, albeit a briefer one than usual.

That's not a concern this summer. So, Fotioo and his strength and conditioning staff are slamming on the gas pedal to make up for lost time.

"Everyone needs to be on the same page [in terms of] accountability, hard work and doing it consistently," Fotioo said. "[Last year's freshmen] didn't experience coming in at 6 a.m. [for conditioning] and then coming back in the afternoon to lift. ... This summer, that's what they're getting out of it."

When UCA got its team on campus last July, there were plenty of restrictions that hampered them in the weight room.

The school only allowed 15 people in at a time, meaning that lifts had to be divided by position group. And because the sessions required smaller groups, Fotioo had to limit each group to 30 minutes at a time rather than the usual hour in order to get everyone in and out, with cleaning in between.

Then there was the fact that spotters weren't allowed for heavier lifts, meaning that guys couldn't work with as much weight as they might normally.

Fotioo had to ask himself, "What are our priorities in the weight room?"

The Bears stuck to what he described as Olympic lifts -- squatting, pressing and cleaning -- using safety squat bars to at least try to replicate what they would normally do with spotters.

Now, they've kept those bars in place and are just adding more weight than ever before, taking things up another notch with the hopes of catching the freshmen and sophomores up by September when UCA opens its 2021 season at Arkansas State.

"Coming up here last year was a step up, the intensity and everything. But this year is even scaled up further," sophomore tight end Haze Denton said. "Just being here with all the guys, we're all in the same boat, so it's brought us together as a team, having to suffer and grind together as a team."

In the weight room, you might miss Fotioo. He's not menacing in physical size nor presence -- in fact, he may be the smallest person in there on this day, other than a couple of coaches' kids.

But he gets his message across.

There is no second in which you don't hear the clanging of weights or the grunting of a player. Fotioo's sessions are short yet full of intensity.

He's not going to get on any individual player. That's not to say he won't teach them the first or second time -- Fotioo does expect his guys to constantly "take care of their bodies," but he knows it's something that isn't necessarily natural to most teenagers living away from home for the first time.

By instilling those habits in the Bears early, Fotioo teaches them how to get on one another.

"[He] brings the best out in you," sophomore defensive back Tamuarion Wilson said of Fotioo. "You want to push each other to make the whole team better. It's not just one person -- you want the whole team to be on the same level."

That's evident at the end of the session. The group, around 50 players, all freshmen and sophomores, are finishing things off with wheelbarrows across the indoor facility.

One last player is working his way toward the end zone, a minute or two after the rest have finished.

The Bears gather around, calling his name as he inches closer to the finish.

When he finally crosses, there's a collective sigh of relief. They're done -- at least for today.

Print Headline: Bears not holding back on conditioning