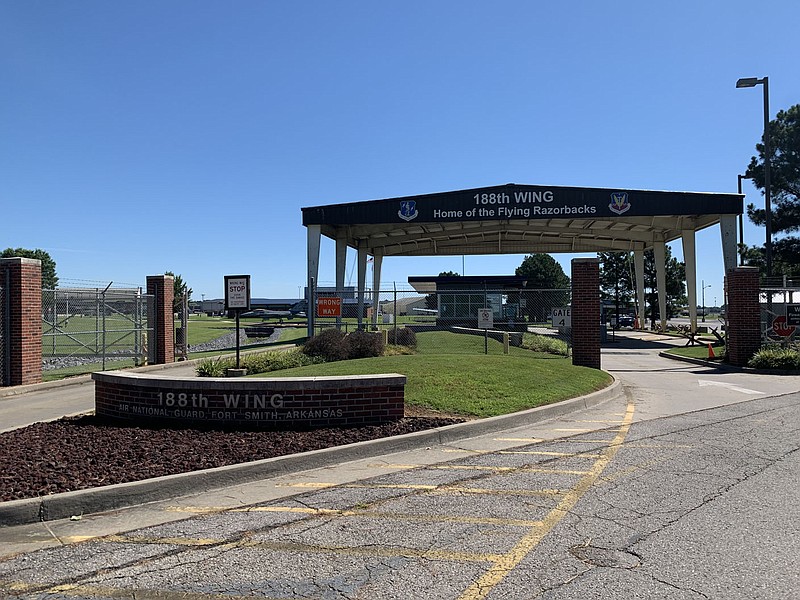 The entrance to Ebbing Air National Guard Base as seen on Tuesday. (NWA Democrat-Gazette/Thomas Saccente)

Justices of the peace voted 11-0 on a motion made by District 6's Danny Aldridge to earmark the money for this purpose during its meeting Tuesday.

The money could be used for an expansion of the runway at the base or any other project in the foreseeable future as the base is prepared to set up a Lockheed Martin F-35 Lightning II training center for Foreign Military Sales participants and the new home for a Singaporean General Dynamics F-16 Fighting Falcon training unit.

The Air Force announced Ebbing, home to the 188th Wing of the Arkansas Air National Guard, as the preferred location to host the mission June 3. It beat four other possible sites, although Selfridge Air National Guard Base in Mount Clemens, Mich., is the alternate site in case an environmental impact analysis shows Ebbing to be an unsuitable location.

Sebastian County's commitment comes after Gov. Asa Hutchinson said June 8 the state committed $17 million to a $22 million project to add 1,300 feet of runway at Ebbing to prepare for the mission. The city Board of Directors unanimously voted June 15 to commit $5 million from the city's general fund for the project.

County Judge David Hudson recommended Tuesday the Quorum Court approve $1 million from the CARES Act fund to support the runway extension project. He wrote in a memo included in the meeting packet prior to Ebbing being chosen for the training mission, he told the planning leadership group involved in this process, which also included military representatives, as well as representatives from the governor's office, Fort Smith and the Fort Smith Regional Chamber of Commerce, the county could allocate the money for this purpose subject to approval by the court.

Hudson said Sebastian County got $2.1 million in unobligated money, meaning it isn't specified for a specific purpose, from the CARES Act in December 2020. There's more than $1.8 million in the county's fund as of Monday.

Aldridge said Tuesday he wasn't opposed to spending $1 million to help the training mission project at Ebbing, calling it "one of the greatest things that's ever happened in our community." However, he recommended the county look at earmarking the money until it sees what's really needed to assist in this project, as opposed to dedicating it to something specific , such as a runway extension.

Foreign Military Sales is a security assistance program allowing the U.S. to sell defense equipment, conduct training and provide services to a foreign country when the president determines doing so will strengthen national security and promote world peace, according to an Air Force news release.

Singapore's Air Force is an F-35 Foreign Military Sales customer wanting its F-16 squadron with its F-35 aircraft at a long-term site.

A motion to earmark $1 million from Sebastian County’s Coronavirus Aid, Relief, and Economic Security Act fund to support an expansion of Ebbing Air National Guard Base in Fort Smith.