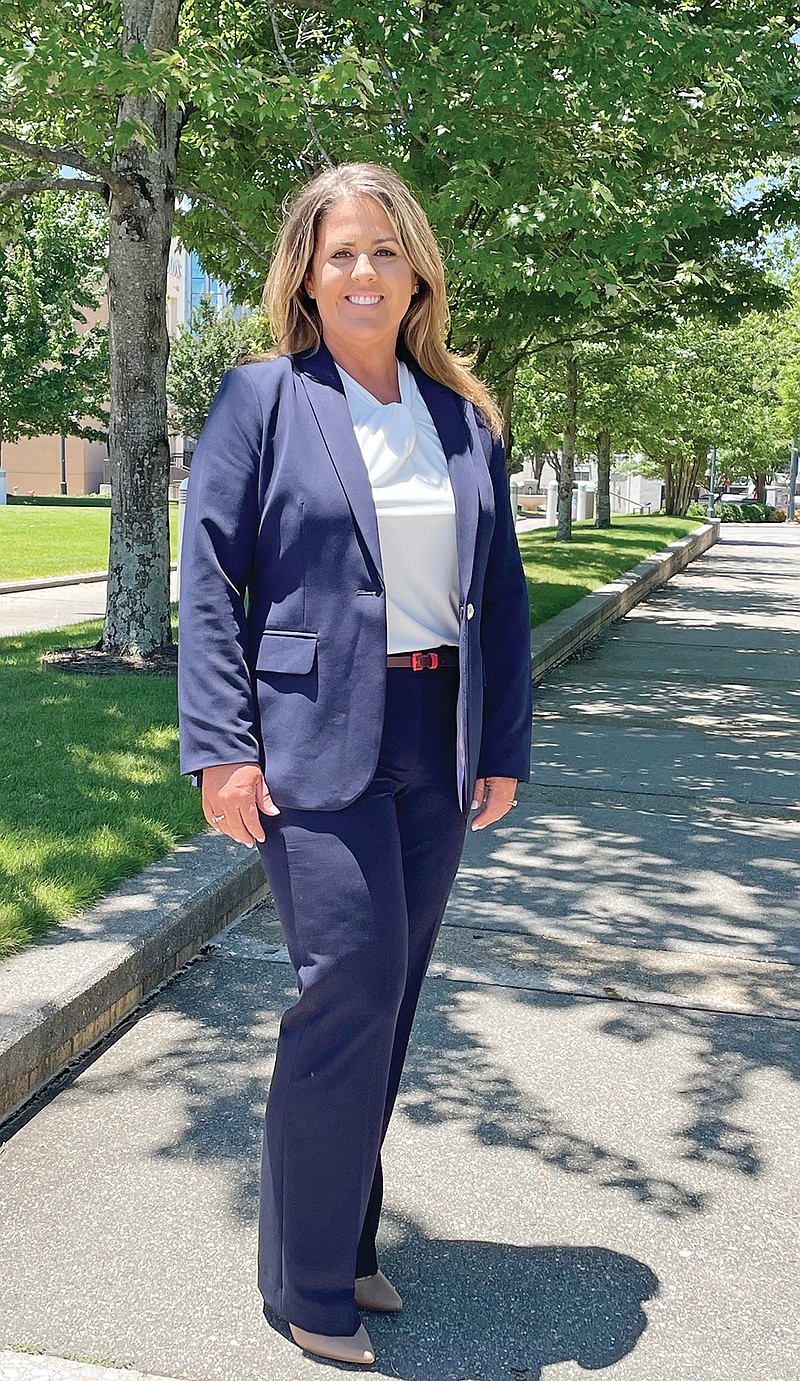 Heidi Wilson was named superintendent of the East End School District in April. She has been an elementary principal in the district and served as high school principal just before taking the new role.

Heidi Wilson didn’t have experience as a superintendent, but she promised the East End School Board something if they hired her.

“I told them, ‘I know this will be my first superintendency, and I know I have a lot to learn, but you’re not going to find anybody who loves this school district more,’” she said.

Wilson was hired unanimously by the board.

It’s not like school-board members didn’t know her. Wilson has been an elementary principal in the district and was high school principal just before becoming superintendent in April. She replaced Lori Edgin, who became superintendent for the Atkins School District. Wilson has also been federal-programs coordinator and a counselor in the district.

Wilson’s husband, Chad, teaches math at Bigelow High School and coaches junior boys basketball. Her sister and brother-in-law teach in the district, too.

She left Bigelow to spread her wings before landing back at home.

When she was 22, newly graduated with a degree in family and consumer sciences from the University of Central Arkansas in Conway, she turned down a job in the East End School District.

“It broke my mom’s heart when I made that decision,” Wilson said. “I was too intimidated at 22 to take a job with 18-year-olds I’d gone to school with.”

Teaching wasn’t her first career choice; it was law.

Wilson met Chad when she was at UCA, and he was already a teacher and a coach. She was impressed by how he made a difference in kids’ lives.

“He loved his job so much that I wanted to pursue education rather than being an attorney,” she said.

Wilson decided she wanted to be a counselor, but she had to teach first. She took a job at DeValls Bluff, teaching family and consumer sciences in high school for a year.

She also taught grades nine through 12 at Mills High School in Little Rock while she finished her degree to become a counselor, then became a counselor there. She also worked as a counselor at Russellville High School, Conway Junior High and Perryville before taking the counselor’s position at Anne Watson Elementary School in Bigelow.

She first worked under then Principal Stacy DeFoor.

“He says I’m the one who trained him as a principal. I was his counselor, but I’ve always been a little bossy,” she said, laughing. “He and I worked very well together.”

She left for a year to become assistant principal at Woodrow Cummins Elementary School in Conway, but when DeFoor left for a job in the Conway School District, too, she took his spot as Anne Watson principal and and hasn’t left the district since.

“It was a great experience working under Dr. [Greg] Murry,” she said of the Conway superintendent, who is retiring this year.

“I just felt like I needed to serve [Bigelow] — somebody who had roots there and loved that town,” she said. “I took a big pay cut, but that’s just where God wants me to be; I know it.”

There were lots of opportunities through the years to apply for the top administrator’s job in Bigelow, but she said the timing wasn’t right.

“The superintendent’s job has been open so many times since I’ve been in Bigelow, but I’ve never wanted to apply. I didn’t want to be away from kids. I loved being around the students; they are so fun. But I felt like this was the time,” she said. “You can still be around students if you want to.”

Wilson previously said her mother is her biggest inspiration. “She has this saying, ‘We will not be remembered for what we have, but for what we have given.’ I think if you live by that motto, you will be OK,” Wilson said.

East End School Board President Heather Fulmer said there were more than 25 applicants for the superintendent’s position, but Wilson stood out.

“We chose Mrs. Wilson for many reasons,” Fulmer said. “She graduated from Bigelow schools and still lives in our community. She was a well-respected principal at Anne Watson Elementary and Bigelow High School. She has a huge heart for our students, staff and families.”

Wilson said Myra Graham, a former East End superintendent who hired Wilson as counselor, had encouraged her to go back to school and get her administrator’s license.

Graham, who is retired and lives in Jonesboro, said her own motto has always been “It’s all about the kids.” When she interviewed Wilson, she said it was obvious Wilson has the same philosophy.

“I saw that in Heidi as she talked about her counseling role,” Graham said. “I could see she had a passion for kids, and she had a great connection with people,” particularly with the students’ parents. “She just made connections with those people, and she’s from that community. There was a great deal of trust. I said, ‘She’s a leader.’ I encouraged her, ‘Heidi, you need to get your admin license.’”

Graham said she saw a desire in Wilson to “make things better for kids and … really do whatever it takes to make that happen.”

“That community will benefit from her leadership, and I’m looking for and expecting great things to happen with that small school district because of her leadership,” Graham said.

Wilson said that top among her goals as superintendent is to make sure the almost 620 students — 65 percent of whom qualify for free or reduced-price lunches — have as many opportunities as students in a bigger district. She is adamant about breaking the stereotype that they can’t compete with students in larger districts.

“My older daughter graduated and is going to Fayetteville,” Wilson said. “She feels prepared. Our younger daughter is going to be a senior; she’s a National Merit Scholar. We’re really excited this year. We’re proud of her, but we’re proud of our district — she’s a product of that.”

Students as early as ninth grade can get college credit in a partnership with the University of Arkansas Community College at Morrilton and Arkansas Tech University in Russellville. (Her daughter graduated with 27 credits, for example.) Wilson said students in the gifted and talented program go on college visits.

“I graduated from [Bigelow], and I did great at UCA; I was ready to go. There’s never been a job I thought I couldn’t do just because I was from a small town. I absolutely loved high school. I did everything — cheer, Student Council president, senior class president; I played basketball.

“The more kids are involved, the less idle time to make bad decisions. At small schools, they get those opportunities more so. A lot of kids benefit from a small-school environment,” she said.

“Our district is growing, but the opportunities are growing; our students, I want them to be able to compete with anybody else. Good things come in small packages; that’s what I say a lot to our staff, and I believe that. Just because we’re small doesn’t mean we should offer our students any less, and that’s something I’m passionate about, that our students have the same opportunities as anybody else,” Wilson said.

“I’m on my soapbox, but I’m passionate about it,” she said, laughing at her own enthusiasm.

In addition to being proud of the district’s academics, Wilson bragged on the athletic teams’ successful year.

“Athletically, we had great seasons. The football team was 12-1 this year. … Girls and boys basketball won their conferences; the girls track team was the state runner-up.

It was a great day to be a Panther,” she said.

Wilson will oversee construction projects, too. The district is building a $150,000 bus and transportation building, as well as new parking lots, and is spending $500,000 to add air conditioning to the gymnasium and physical-education facility, along with upgrading the electrical infrastructure.

“I definitely want to upgrade our facilities and continue to offer our kids opportunities, to prepare them to leave high school,” she said. “I want them to love what they do like I love what I do.”

In 1996, she gave a graduation speech as senior class president. “Nowhere on my radar was it that I would be superintendent, … but I am so thankful that’s how it worked out,” she said.

“I can’t even describe the pride I have; I just know that if I set my mind to it, I can do it, and I know Bigelow prepared me for that,” Wilson said. “Kids are set up for success, and that can be attributed to teachers at Bigelow. I can’t even describe how proud I am to be from Bigelow, and I want it to be the best it can be.

“I wish everyone loved their school the way I do.”