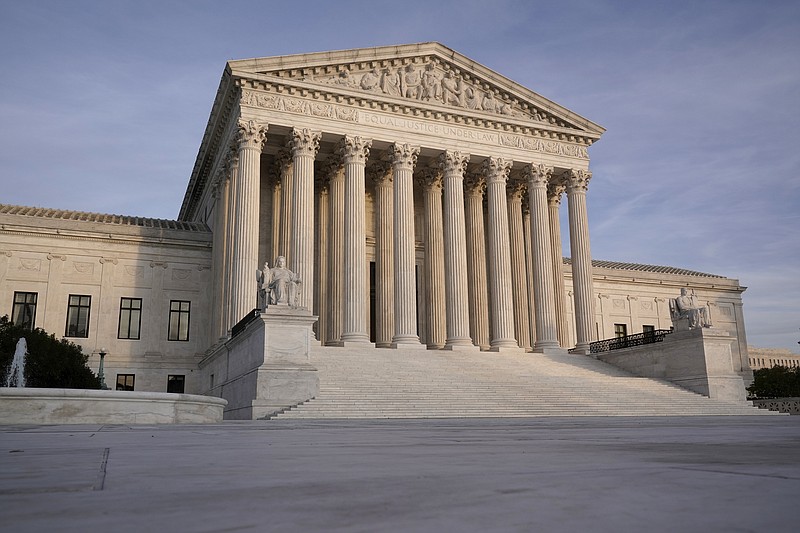 In this Nov. 5, 2020 file photo, The Supreme Court is seen in Washington. (AP Photo/J. Scott Applewhite)

WASHINGTON -- The U.S. Supreme Court on Monday rejected a Virginia school board's appeal to reinstate its transgender bathroom ban, handing a victory to transgender-rights groups and a former high school student who fought for six years to overturn the ban.

After learning that the high court refused to hear the board's appeal, Gavin Grimm, now 22, said his long battle is over. "We won," he tweeted. "Honored to have been part of this victory," he added.

Grimm was a 15-year-old student at Gloucester High School when he was banned from using the boys bathroom. The Gloucester County School Board's policy required Grimm to use restrooms that corresponded with his biological sex -- female -- or private bathrooms. He filed a federal lawsuit that wound its way through the courts for six years.

[Video not showing up above? Click here to watch » https://www.youtube.com/watch?v=XDaeZHltd-U]

Grimm said that being forced to use the nurse's room, a private bathroom and the girl's restroom was humiliating and severely interfered with his education. He said he is heartened by his victory because "a win in Virginia is a win everywhere."

"This is a national conversation because trans people are everywhere and because we have to fight for our rights in like most of the states in our nation still who have not passed affirming policies," he told The Associated Press.

The American Civil Liberties Union said the high court's decision to let stand the lower-court rulings supporting transgender rights is a significant victory for Grimm and transgender students across the country.

"This is is the third time in recent years that the Supreme Court has allowed appeals of court decisions in support of transgender students to stand," said Josh Block, senior staff attorney with the ACLU's LGBTQ & HIV Project.

"Our work is not yet done, and the ACLU is continuing to fight against anti-trans laws targeting trans youth in states around the country," Block added.

David Corrigan, an attorney for the School Board, declined to comment on the decision.

In its petition asking the Supreme Court to hear the case, the School Board argued that its bathroom policy poses a "pressing federal question of national importance."

The board argued previously that federal laws protect against discrimination based on sex, not gender identity. Because Grimm had not undergone sex-reassignment surgery and still had female genitalia, the board's position has been that he remained a female.

The ACLU, which represented Grimm in the lawsuit, argued that federal law makes it clear that transgender students are protected from discrimination.

A U.S. district court judge and the 4th U.S. Circuit Court of Appeals both ruled that the board's policy violated Title IX, a federal civil-rights law barring sex-based discrimination in any school that receives federal money. They also found it violated the U.S. Constitution's Equal Protection Clause by prohibiting Grimm from using the same restrooms as other boys.

The Supreme Court was scheduled to hear Grimm's case in 2017, but it was sent back to the lower courts after the Trump administration withdrew the government's support for Grimm's claims.

GLAAD, the world's largest LGBTQ media advocacy organization, hailed the decision to leave in place the lower-court rulings that found the bathroom ban was unconstitutional.

"This is a victory for transgender students, who simply want to be themselves without worrying about being rejected or refused access to basic dignities," GLAAD President and Chief Executive Officer Sarah Kate Ellis said in a statement.

But he said that it "would be hard to imagine a court that would not take this victory into account."

"Importantly, decisions of federal appellate courts, particularly when denied review by the U.S. Supreme Court, are often cited in subsequent decisions for their persuasive value in analyzing the legal issues," Castillo wrote in an email.

Information for this article was contributed by Ben Finley of The Associated Press.