Can't go back to normal yet, Fauci warns

CDC’s recommendation out for use of third vaccine by Compiled Democrat-Gazette Staff From Wire Reports | March 1, 2021 at 7:30 a.m. 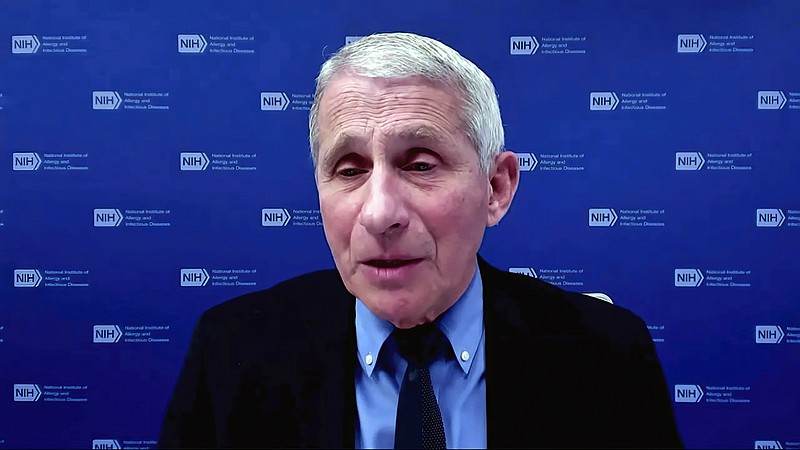 In this image from video, Dr. Anthony Fauci, director of the National Institute of Allergy and Infectious Diseases and chief medical adviser to the president, speaks during a White House briefing on the Biden administration's response to the COVID-19 pandemic Wednesday, Jan. 27, 2021, in Washington. (White House via AP)

The baseline level of coronavirus cases needs to fall further before the U.S. can confidently resume normal activities, even as the vaccine rollout accelerates, Anthony Fauci said.

Fauci, director of the National Institute of Allergy and Infectious Diseases, made the rounds of Sunday talk shows at a moment when news related to the pandemic has been positive, but fresh concerns are emerging.

"We've seen what happens when you pull back prematurely," Fauci said on CBS' "Face the Nation." "We will be [victorious over the coronavirus,] but we're not there yet."

[Video not showing up above? Click here to watch » https://www.youtube.com/watch?v=QbBChsIGPBI]

Last Monday, the U.S. passed the milestone of 500,000 deaths to covid-19; that number is now closer to 512,000. The nation's first death from the virus was announced during the Conservative Political Action Conference meeting a year ago.

The Food and Drug Administration gave formal approval Saturday to a third vaccine for use in the U.S. The Johnson & Johnson vaccine, which requires only a single shot, is expected to quickly accelerate the number of people who are fully protected once the company ramps up production later this spring.

The Centers for Disease Control and Prevention is recommending the Johnson & Johnson vaccine for people 18 and older. The action comes after a unanimous vote Sunday by the CDC's vaccine advisory panel, which strongly endorsed the vaccine's effectiveness in completely protecting against hospitalization and death.

The FDA action permits a vaccine to be used, while the CDC recommends to health providers how it should be used.

"You now have three highly efficacious vaccines, for sure," Fauci said on NBC. "If I would go to a place where they had J&J, I would have no hesitancy whatsoever to take it."

The Johnson & Johnson shots are expected to start shipping as early as today to sites receiving doses of the authorized vaccines made by Pfizer-BioNTech and Moderna. Those locations include state health departments, pharmacies, federally qualified health centers and community vaccination centers.

Johnson & Johnson's initial supply will be limited -- 3.9 million doses are expected to be shipped this week, with an estimated 20 million doses by the end of March, officials have said. State officials already know what to expect because the number of anticipated doses for all three vaccines was included in information they received last week.

While the U.S. vaccine rollout has accelerated and is poised to do so further, health officials are worried that states will move too quickly in lifting restrictions, even as more contagious variants are gaining ground.

"We understand the need and the desire, understandably, to want to just pull back because things are going in the right direction," Fauci said.

"But you've got to get that baseline down lower than it is now, particularly in light of the fact that we have some worrisome variants that are in places like California and New York and others that we're keeping our eye on."

The Johnson & Johnson vaccine was 85% effective at protecting against severe cases of illness in late-stage trials, and there were no deaths or hospitalizations a month after participants received the vaccine. The vaccine was slightly less effective at preventing moderate illness -- 72% effective in the United States -- where more-transmissible variants have recently begun to be detected.

Some experts worry that the public will fixate on that data point and pass up getting the Johnson & Johnson shot in favor of other vaccines that underwent trials at an earlier stage of the pandemic, when such variants were not a factor.

The CDC's vaccine advisory panel members stressed that doing so would leave people unprotected and delay an end to the pandemic.

"While there are differences in efficacy of the three vaccines for moderate illness, the more severe the outcome, the more similar the efficacy," said Saad Omer, director of the Yale University Institute for Global Health, who is not a member of the panel. "This one-dose vaccine, that can be stored at refrigerator temperatures, is likely to enhance the ability of health departments and health systems to conduct mass vaccination."

During its four-hour meeting, the CDC panel received detailed presentations addressing the vaccine's safety, benefits, feasibility and impact on equity. Members and immunization advocates expressed concern that information about the vaccine's lower efficacy rate among some groups may confuse the public and make it more difficult to persuade people to accept the shots in hard-to-reach rural areas and communities of color that have been disproportionately affected in the pandemic.

"I would get the [Johnson & Johnson] vaccine in a heartbeat," Karen Ernst, who heads Voices for Vaccines, a parent advocacy group, said during the public comment period.

She added that she is concerned that because it has been reported as "less effective," if it is put on a bus and driven to places "where people have had access issues with the other vaccines, we risk the perception that the inferior vaccine is being saved for poor people," or communities of color, or rural residents.

Ernst called for "some real plain language and clear public education" on the vaccine's "real-world effectiveness."

Matthew Daley, a panel member and clinician at Kaiser Permanente's Institute for Health Research, celebrated how a third authorized vaccine would increase supply of a product that many people are anxious to get.

"I think now the most common greeting is, 'have you gotten vaccinated?' People are intensely concerned about where they are on the priority list," Daley said. If all supplies of the three vaccines are used, he said, "then everyone essentially moves up on whatever priority list that they're on."

Additionally, Johnson & Johnson plans to test its coronavirus vaccine in infants and even in newborns, as well as in pregnant women and in people who have compromised immune systems.

The plan for expanded clinical trials met with the approval of Dr. Ofer Levy, director of the Precision Vaccines Program at Harvard's Boston Children's Hospital and a member of the FDA advisory committee that reviewed the company's vaccine data.

When Levy saw the outlines of the planned trials, "they turned my head," he said. They were reported as part of the company's application to the FDA for emergency use approval and discussed at the FDA meeting.

"They did not get into a lot of detail about it but did make it clear they will be pursuing pediatric and maternal coronavirus immunization studies," Levy said. They referred committee members to their briefing materials where, on page 34, the company mentioned the planned studies.

A spokesperson for Janssen Biotech, the Johnson & Johnson subsidiary that is manufacturing the vaccine, confirmed that the company planned to extend clinical trials to children.

Pfizer-BioNTech and Moderna plan to gradually test them in younger and younger age groups. Those vaccines are now being tested in children 12 and older.

Johnson & Johnson will first test its vaccine in children older than 12 and under 18 but plans to immediately after begin a study that includes newborns and adolescents. The company then will test its vaccine in pregnant women and finally in immunocompromised people. Like the other companies, Johnson & Johnson will analyze safety and immune responses.

Levy added that in his opinion children need not be immunized in order for schools to open. But many parents are afraid to send their children to school without a vaccine. And, he noted, vaccinating children will help the country reach herd immunity.

Information for this article was contributed by Michael Riley and Ros Krasny of Bloomberg News (TNS); Lena H. Sun and Isaac Stanley-Becker of The Washington Post; and Gina Kolata of The New York Times.