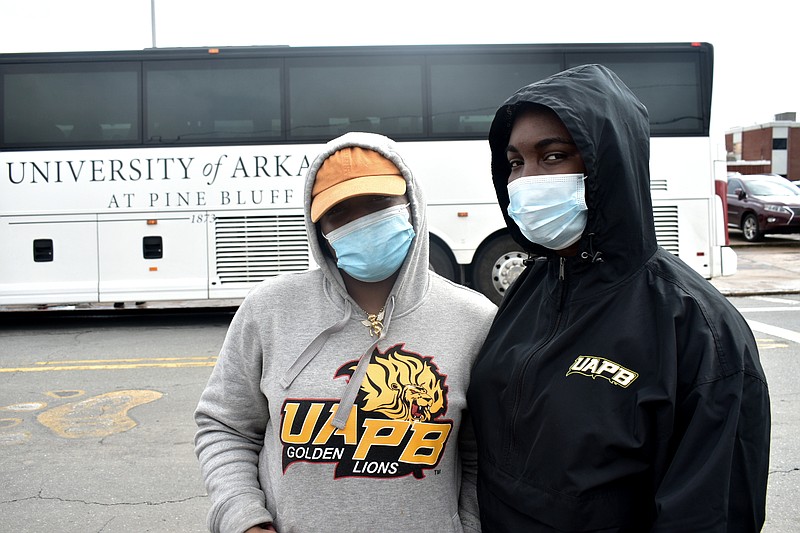 From left, freshmen Otisha Williams, 18, of Hartford, Conn., and Eboni Smith, 19, of Little Rock returned to campus before the third and final bus (pictured) dropped off students at Harrold Complex at the University of Arkansas at Pine Bluff on Sunday, Feb. 28, 2021. (Pine Bluff Commercial/I.C. Murrell)

Coming from Hartford, Conn., Otisha Williams had two weeks of a college experience she was not expecting down south.

There were double snowstorms that hit on Feb. 15 and 17, causing disruption at the University of Arkansas at Pine Bluff, where the 18-year-old freshman attends on a track and field scholarship.

"That's one of the reasons why I chose the school, because they told me we wouldn't get snow, coming from a place where I always get snow," said Williams, a business management major. "It was kind of OK for me, but people from here looked like they were having a field day seeing snow."

Not only were the snows record-setting, but during the week, days of sub-freezing temperatures also set records. That created a water crisis across the city, as well as on campus, where there was no heat or water, leaving university officials scrambling to temporarily house residential students in Pine Bluff and Little Rock.

Three buses from Little Rock shuttled many of the 345 displaced students back to campus on Sunday, as water pressures across Pine Bluff remained stable and the on-campus heating and sanitation systems that were affected by a weather-affected Pine Bluff water system showed improvement. The campus will reopen for the first time in at least two weeks today, although most classes are held online.

Williams and her friend, Eboni Smith, 19, of Little Rock, drove to the state capital Feb. 19 from their Harrold Complex dormitory and also returned Sunday. Smith spent time with her mother, who also stayed in a hotel working as a paramedic as the winter weather limited travel.

"Our RA [resident assistants] literally banged on our doors and said, 'Y'all have 30 minutes. We're going to a hotel,'" Smith said. "The bus literally didn't leave two, three hours after she told us 30 minutes, so we were shoveling snow. Everybody was trying to get their cars out, and that was all the time we had."

The young women were among the first group of students to leave, and they noticed the students riding the bus sat six to seven hours waiting to get to the hotel. They made it to their hotel before the bus did.

What was supposed to be a two-day stay away from campus, Smith said, turned into eight.

"I didn't have enough clothes, and I work in Little Rock, also," Smith said. "I had no work clothes. I didn't have anything. I was just unprepared, in general. I just had the change of clothes for two days. Of course, I packed for three, just in case, but other than that, I didn't pack anything to go out."

Virtual learning and work kept the animal science major occupied during the crisis, as it does under normal circumstances. She credits time management skills for making things work.

"There's nothing really going on, on campus, so it's pretty easy," she said.

Asked why they had moved off campus much later than others, Goree responded: "That, I don't know. That's a very good question right there."

Goree, a pre-health education major, suspected the water issues weren't as serious at first until a few days later, when he began to hear otherwise from campus leaders. He called the entire experience "very confusing."

"Just trying to keep up with your work, the bad Wi-Fi, constantly moving, it was just a lot," Goree said.

The weak Wi-Fi signal, if any, made it hard for Collins, who studies agriculture, to turn in his work. And the student interaction in the hotel was nonexistent.

"We were the only students there," Collins said, agreeing with Goree they were happy to be back in the dorm.

Harrold men's RA Caleib Batiste, 21, a junior from New Orleans, said he was able to stay in the rhythm of campus life despite being transported with fellow residents to the Wyndham Hotel in Little Rock.

"My biggest concern was the students," Batiste said. "I know some of them don't have access to the computers, so me and a couple of RAs tried to work out ways around that."

Elbert Bennett, vice president of student affairs at UAPB, said any student that doesn't have a laptop could have checked one out and that his office checked to make sure every hotel had Wi-Fi access the students could use.

The water pressure on campus wasn't completely lost in all of the residential halls during the aftermath of the snowstorm, Bennett said. He added the sewer system at the Delta Complex was assisted by a tank.

"When we got the notice that the pressure was dropping, we knew it was time to get all of our students out," Bennett said. "Now, we do have a few students that didn't go. Their pressures were pretty good because we have a group of dorms where the sewer systems operated with tanks on them. Those were good; they just operated a little slower."

Some students managed to return to campus before Sunday, Bennett said, adding 40 students in the Piney Woods Apartments were not impacted as greatly as those closer to the center of campus as the Harrold Complex residents.

"We had some local students from Pine Bluff, Little Rock and surrounding areas, some of those students went home," Bennett said. "Some of the students stayed with friends and family in the local community, so it worked out pretty well. And then some of our athletic teams, they were out in competition."

In all, 770 students stayed on campus, Bennett said. Batiste reports the 345 that were in hotels minded their conduct.

"They were pretty tame," Batiste said. "Some of the hotel staff even complimented us on our well behavior." 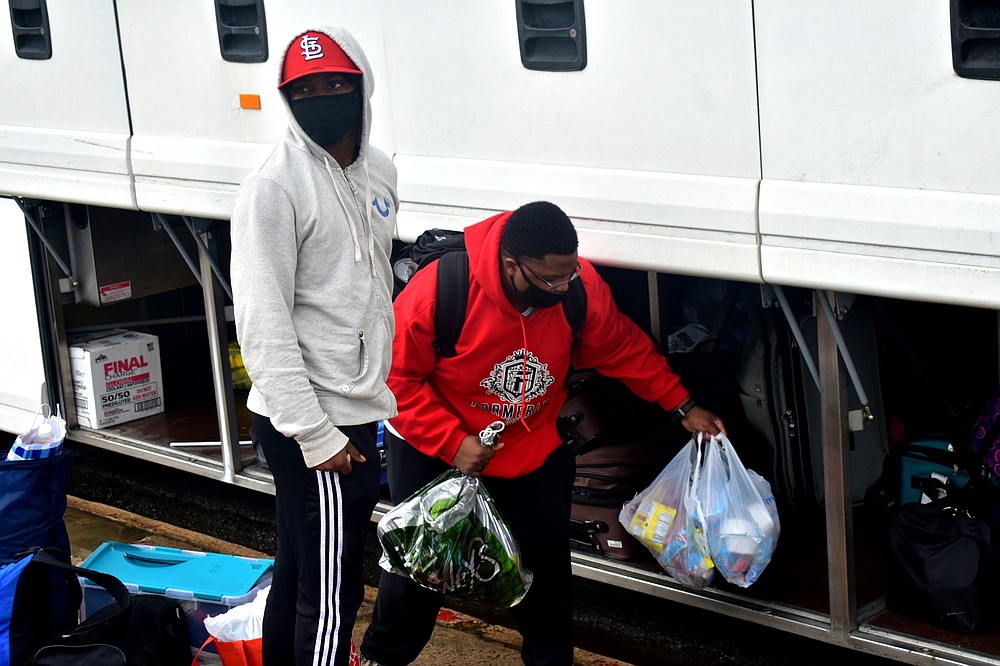 From left, freshmen Terry Norwood, 19, of Memphis, and Jonathan Whitney, 18, of Camden unload the bus after returning from a Little Rock hotel to Harrold Complex at the University of Arkansas at Pine Bluff on Sunday, Feb. 28, 2021. (Pine Bluff Commercial/I.C. Murrell) 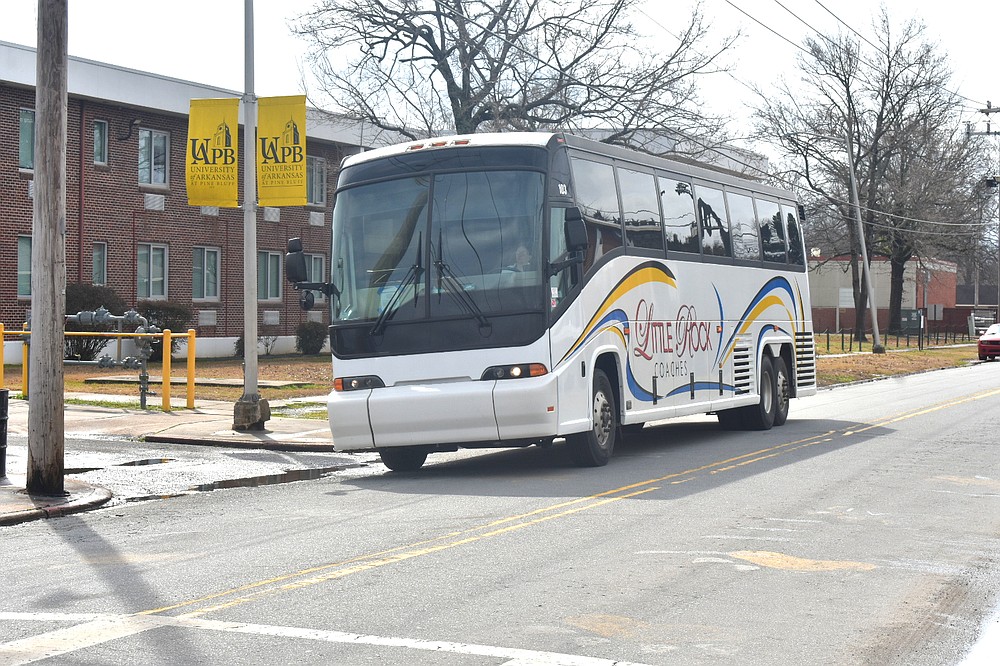 A bus heads down L.A. "Prexy" Davis Drive to Harrold Complex at the University of Arkansas at Pine Bluff on Sunday, Feb. 28, 2021. Students who were displaced from campus due to water pressure issues stemming from the Feb. 14-17 snowstorm returned to campus. (Pine Bluff Commercial/I.C. Murrell) 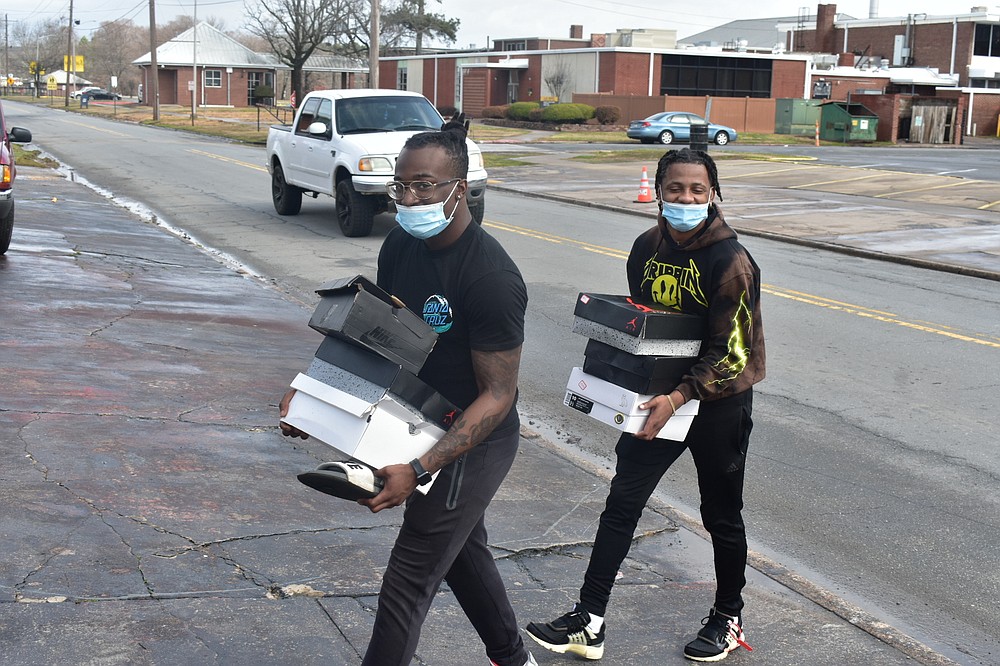 From left, Marcus Goree, 19, and Kameron Collins, 18, both of Memphis, return their belongings back to Harrold Complex at the University of Arkansas at Pine Bluff on Sunday, Feb. 28, 2021, after coming back from a Pine Bluff hotel. (Pine Bluff Commercial/I.C. Murrell)
ADVERTISEMENT