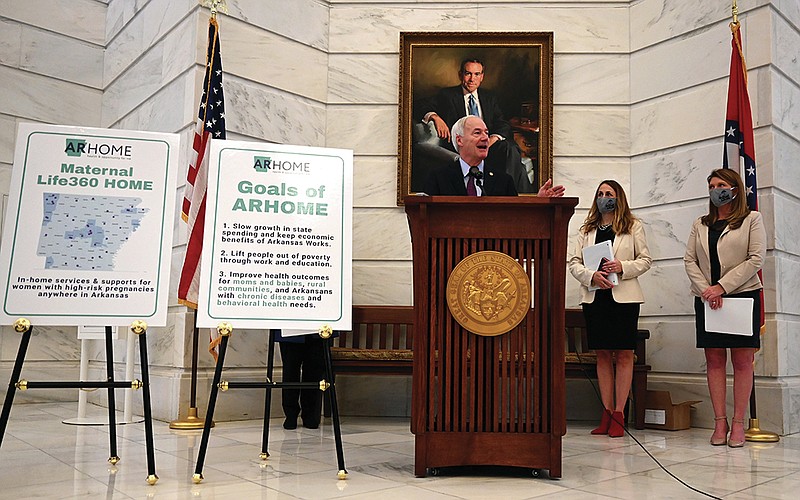 Senate Bill 410, the proposed "Arkansas Health and Opportunity for Me Act," would be the second overhaul of the state's Medicaid expansion during the administration of Gov. Asa Hutchinson, a Republican who inherited the program from his Democratic predecessor, Gov. Mike Beebe.

The bill also comes as the Legislature seeks to navigate the future of the state's Medicaid expansion program under the new administration of President Joe Biden, which has signaled it will not permit traditional work requirements sought by Arkansas and other states.

Because the budget for the Medicaid expansion must be approved by a three-fourths majority of the Legislature each year, the program faces a perennial challenge in the Republican-dominated body.

The Medicaid expansion program currently insures roughly 300,000 low-income Arkansans, and rolls have swelled because of the covid-19 pandemic. Its $2.5 billion budget this fiscal year includes $2.2 billion in federal funds and $252 million in state money.

[Video not showing up above? Click here to watch » https://www.youtube.com/watch?v=oaJWT_FECGI]

"We cannot afford to veer off course and pursue alternative paths," Irvin said. "ARHOME [Arkansas Health and Opportunity for Me] really is the most responsible and pragmatic approach that we can pursue."

The bill authorizes the Arkansas Department of Human Services to seek a new waiver from the federal government to purchase qualified health plans from private insurers for Arkansans eligible for the Medicaid expansion program. Eligibility is now set at 138% of the federal poverty level, which is $17,774 for a single adult or $36,570 for a family of four.

Those private plans -- a staple of the private-option Medicaid expansion enacted by Beebe and lawmakers in 2013 -- pay medical providers higher rates for services than traditional Medicaid's fee-for-service model.

Enrollees would remain qualified for the private health plans only if they met certain criteria to be set by the Human Services Department, including work or continuing education. Those who failed to qualify would be moved to a traditional fee-for-service model.

During his first term, in 2017, Hutchinson signed legislation to create a work requirement for the Medicaid expansion program, which he then rebranded as Arkansas Works.

Then-President Donald Trump's administration approved a waiver for Arkansas' work requirement, but it was struck down by a federal judge in 2019 in a case that remains pending before the U.S. Supreme Court. The Biden administration signaled that it would no longer approve work requirements for state Medicaid programs. It also has asked the Supreme Court to cancel oral arguments in the case scheduled for this month.

During the nine months that the work requirement was in effect, more than 18,000 Arkansans were kicked out of the program for failing to meet the requirement, which also included options for job training and volunteering. Without the requirement in place, Republicans have sought other ways to reduce costs and trim the Medicaid rolls.

A purely fee-for-service model would reduce state expenditures for Medicaid expansion by about $180 million over five years compared with the proposed ARHOME plan, according to estimates by the Human Services Department.

Still, some lawmakers who have voted against the Medicaid expansion program in the past said Monday they remain skeptical of SB410.

"I think there's better options out there," said Rep. Justin Gonzales, R-Okolona. "I don't know that it's the least expensive way to promote health care in the state for these individuals. I haven't landed either way on that. I'm looking forward to the debate and seeing what comes out."

Lundstrum said she would determine her vote after reading through the bill.

"It's always going to be about the cost, and I'm going to read it, and it's still taxpayer dollars and we have to make it work, so we'll see," Lundstrum said.

While SB410 will take a simple majority of the Legislature to pass, it will still take three-fourths of lawmakers to approve the appropriation for the state Division of Medical Services, including spending authority for the new program.

Democrats, who have traditionally supported Medicaid expansion, also said Monday they were attempting to digest the proposed changes.

"It appears to be a really big change, a significant change, and we need to understand what that means vis-a-vis what we already have, and evaluate whether or not it's something we think is workable," said Sen. Joyce Elliott, D-Little Rock.

Under a timeline prepared by the Human Services Department, passage of SB410 this month would allow the agency to draft a waiver to submit to the Biden administration between March and April, with potential approval in November and a launch of the ARHOME program on Jan. 1, 2022.

SB410 would also require the Human Services Department to develop criteria for specialized programs through which hospitals could receive funding to treat veterans, mothers with high-risk pregnancies, rural Arkansans with mental illness or substance abuse disorders, and people who were previously incarcerated or in the foster care system.

Speaking to reporters Monday, Gillespie said Medicaid enrollees may also be able to fulfill the work or education requirements sought by SB410 by participating in one of those programs tailored to their health needs, as determined by the Human Services Department.

"Our goal is for them to take advantage of what's there, and that includes using their plan," Gillespie said.

One lawmaker who has voted against the Medicaid expansion program in the past, Sen. Bob Ballinger, R-Ozark, said Monday that he was concerned the incentive structure laid out in SB410 could become "unmanageable" if too many enrollees are shifted back and forth from private health plans to the fee-for-service model.

Still, Ballinger said human services officials had expressed confidence in the plan to lawmakers, making him "generally" supportive of the bill.

"I think the question about whether we're going to have Medicaid expansion or not, I think that ship has sailed," Ballinger said. "That really isn't the question anymore, the question is, what is it going to look like and what form is best?"

CORRECTION: Senate Bill 410 would create the Arkansas Health and Opportunity for Me Act, the latest proposal to use Medicaid funds to pay for private health insurance for low-income people. An earlier version of this article gave an incorrect bill number.