No doubt No. 1: Hogs slide in to baseball’s top spot 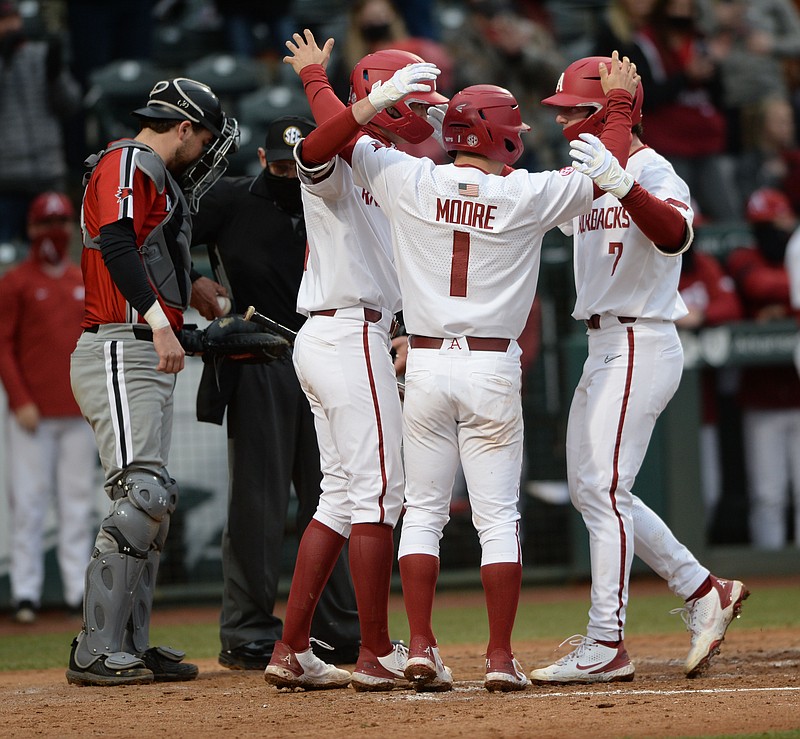 FAYETTEVILLE — There is consensus: The Arkansas Razorbacks have the No. 1 team in college baseball.

Following a 7-0 start, the Razorbacks rose to the top of five of six major polls Monday, including the USA Today Baseball Coaches Poll. Arkansas is also No. 1 in the polls released by Baseball America, D1Baseball, Collegiate Baseball Newspaper and the National Collegiate Baseball Writers Association.

Perfect Game ranked the Razorbacks No. 3 in its new poll Monday behind Louisville (6-1) and Florida (6-2).

Arkansas is ranked No. 1 in the coaches poll for the first time since February 2013, when the Razorbacks were the consensus No. 1 for the first three weeks of the season.

Arkansas had never been ranked atop the Baseball America poll, which began in 1981, or the D1Baseball poll that began in 2015.

Ole Miss was previously the No. 1 team in most polls but fell from the top spot after it lost two of three games to Central Florida at home over the weekend. Several other highly ranked teams lost at least once to unranked opponents in Week 2, paving the way for the Razorbacks to leapfrog to the top spot.

Arkansas coach Dave Van Horn attempted to temper the No. 1 ranking when he spoke to fans during a virtual Swatters Club on Monday.

“If you’re ranked No. 1, there’s nowhere to go except backward,” Van Horn said. “Ole Miss found that out. … Florida found that out. Hopefully we can stay up there for a while.

“I just want us to get better, continue to get better and be able to handle being ranked that high. It’s each individual’s own issue and they need to figure it out, that it does not matter right now. It’s great, and I appreciate it. It’s good for the program, it’s good for something to talk about, but at this time of year it’s kind of a pat on the back, you’re doing pretty well, let’s see if you can stay there and see how long you can stay there.”

Arkansas moved up seven spots in the coaches poll after it was ranked eighth in the preseason. The coaches poll updated a week earlier than in past seasons when it did not update its preseason poll until after Week 3.

The Razorbacks lead 10 SEC teams ranked in this week’s coaches poll, including six SEC teams in the top eight.

TCU is ranked No. 9 and Texas Tech is No. 11, while Texas — previously ranked 10th — fell out of this week’s poll. Arkansas beat all three teams during the College Baseball Showdown to open the season.

The Razorbacks are coming off a four-game sweep of Southeast Missouri State at Baum-Walker Stadium.

Arkansas rallied to defeat SEMO 6-5 in 10 innings Thursday, then won comfortably by scores of 7-3 on Friday, 9-3 on Saturday and 11-4 in 5 innings Sunday.

The Razorbacks are scheduled to host Murray State at 3 p.m. Friday in the first of a three-game series. The second game of the series has been moved ahead by one hour to a 1 p.m. start time Saturday to avoid a conflict with the scheduled 4 p.m. basketball game between the Razorbacks and Texas A&M at Walton Arena.

Sunday’s baseball finale against Murray State (4-3) also is scheduled to begin at 1 p.m.

Van Horn indicated this weekend’s pitching rotation might be adjusted after Zebulon Vermillion struggled with command in his first two starts. Vermillion, who was the Razorbacks’ opening-day starter, has allowed six walks in seven innings.

“We almost feel like he’s holding back a little bit because he’s starting,” Van Horn said of Vermillion, who had only appeared as a relief pitcher in his first three seasons at Arkansas. “We’re kind of evaluating that. So, you know, you might see Zeb at the back of the game, you might see him spot start, but we’ll know more about that in the next day or two.”

Van Horn said he is optimistic catcher Casey Opitz will be in the lineup Friday. Opitz passed concussion protocol but injured his wrist in a hard collision at first base Sunday against SEMO.

Among every-day players, Opitz is leading the Razorbacks with a .381 batting average through two weeks.

“His defense is awesome as always, leadership’s great calling pitches — just a real field general out there,” Van Horn said. “He’s hitting the ball with a lot better authority from both sides of the plate, driving it.