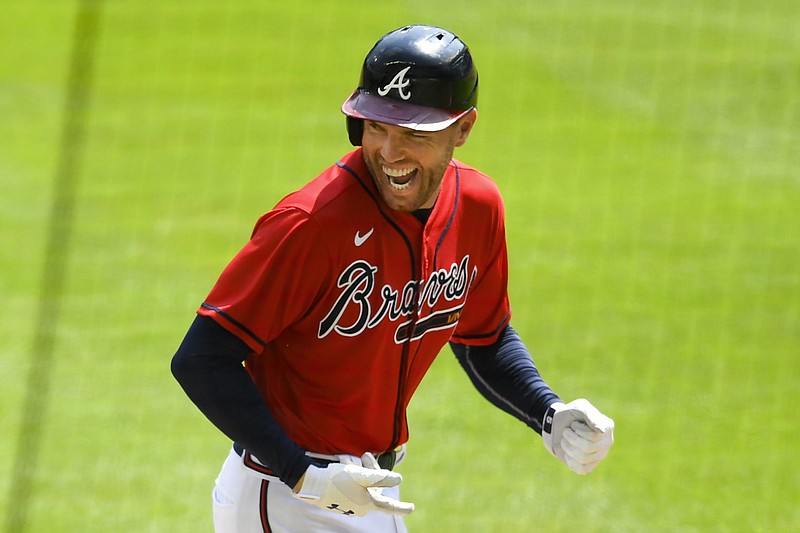 FILE - Atlanta Braves' Freddie Freeman reacts as he runs along the third base line after hitting a grand slam home run in the sixth inning of a baseball game against the Washington Nationals in Atlanta, in this Sunday, Sept. 6, 2020, file photo. NL MVP Freddie Freeman has followed his big season with the Atlanta Braves with an even more memorable offseason. He and his wife have two baby boys, including one from a surrogate mother. He calls his new babies his “twins with a twist.”(AP Photo/John Amis, File)

Freddie Freeman found a way to top the double honors of winning the NL MVP and Hank Aaron Award.

The Atlanta Braves first baseman's bigger thrill is having two new baby boys. He describes his babies, Brandon and Maximus Turner, as his "twins with a twist."

The twist is they were born six weeks apart.

Freeman's wife, Chelsea, gave birth to Brandon on Dec. 30. A surrogate mother gave birth to Maximus Turner on Feb. 14, delaying Freeman's arrival to spring training by about a week.

The boys join Charlie, who is 4, to give Freeman three sons -- and an extraordinary story of parenthood.

Freeman said his wife was told she may not be able to have another child after Charlie's birth by emergency cesarean section. The couple tried without luck for two years in their attempt to become pregnant again.

"It just wasn't happening," Freeman said. "We chose the surrogate route, and nine days before the embryo transfer, I come home from a workout and Chelsea tells me she's pregnant. I was like just shocked. Not something we were expecting at all."

Freddie and Chelsea stayed with their new surrogate plan and made preparations for two babies in their home.

"It's everything you could want and more," he said. "It's such a crazy situation to try and wrap your mind around it, but when you're in it and both boys are here it's like the best thing that could have happened."

While his wife is home with the babies, Freeman and several family members, including his father and grandfather, have Charlie in North Port, Fla., for spring training. He said being away from his babies and wife will make this "probably the hardest spring for me."

It's a small price to pay for realizing his dream of having a big family and seeing Chelsea give birth to her second child.

"Infertility is something people don't really talk about," he said. "We struggled with it for multiple years, especially when having Charlie happened so easily and so fast and then it doesn't happen."

"For people who are going through it, there is a light at the end of the tunnel and there are different ways to figure it out," he said.

Freeman said he and his wife suffered when it didn't seem possible to have more children. Then came the unexpected news.

"You could just see when she told me she was pregnant, it was like a complete boulder falling off her shoulders," he said. "I got my wife back. She was always great all the way through it, but once she was pregnant it was just amazing."

It was the perfect offseason to Freeman's most successful season. He hit .341 in 2000 and won the Hank Aaron Award as the NL's outstanding offensive performer after being named NL MVP.

Freeman also led the Braves to within one game of the World Series.

His success didn't seem likely when he had high fever, causing him to pray "Please don't take me" after a covid-19 diagnosis before the delayed start of the 2020 season.

He led the NL with 23 doubles and hit 13 home runs with 53 RBI in the regular season before landing 28 of the 30 first-place MVP votes.

After his late arrival to spring training, which came with the approval of Manager Brian Snitker, Freeman's challenge is to repeat his 2020 success.

"He felt good [Monday]," Snitker said. "I think it's just getting him back on the field and getting grounders and running around and getting the swings."

Freeman, 31, is entering the final year of a $135 million, eight-year contract. For now, his focus is on his two baby boys -- and perhaps a baby girl down the road.

"Everything with the birth was good," he said of Chelsea. "Maybe she'll do it again. We definitely want to have a girl, so kids are not done in our future."