FBI chief says repeated warnings went out ahead of attack on Capitol by Compiled Democrat-Gazette Staff From Wire Reports | March 3, 2021 at 7:05 a.m. 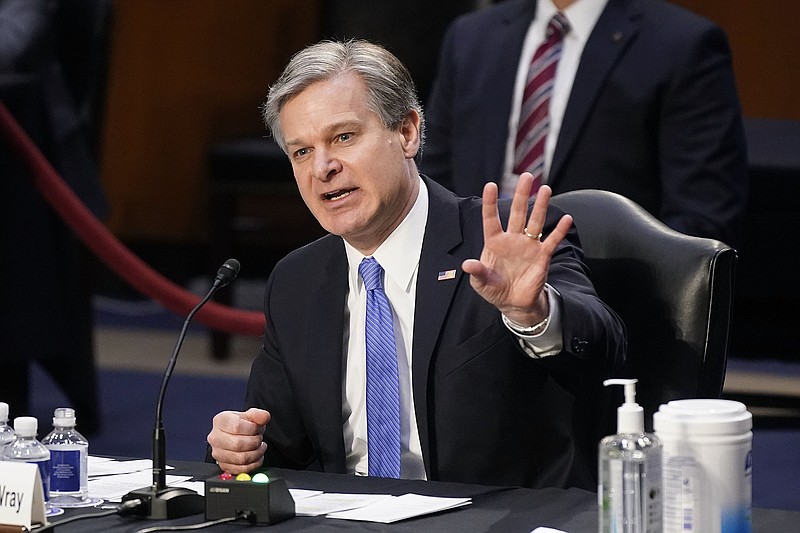 WASHINGTON -- FBI Director Christopher Wray told senators Tuesday that he was "appalled" by the siege of the U.S. Capitol and warned that domestic terrorism is "metastasizing across the country," while insisting that the bureau issued repeated warnings about the threat in the months before the riot.

Wray's testimony before the Senate Judiciary Committee was his first appearance before Congress since the Jan. 6 assault on the Capitol, when a mob of supporters of President Donald Trump stormed the building in protest of the election results, resulting in five deaths and scores of injuries to police officers.

[Video not showing up above? Click here to watch » https://www.youtube.com/watch?v=4V3D6IkWGlo]

"That attack, that siege, was criminal behavior, plain and simple, and it was behavior that we, the FBI, view as domestic terrorism," Wray said. "It's got no place in our democracy."

Pressed on why the FBI had not been more prepared for the violence, Wray said the bureau had for months released intelligence reports related to domestic terrorism -- some specifically tied to the election -- both publicly and to other law enforcement agencies such as the U.S. Capitol Police.

Wray said the bureau was reviewing its actions but agreed that the insurrection was not an "acceptable result."

Today, FBI and military officials are set to testify before a separate panel looking into the events of Jan. 6.

The questioning of senior officials comes amid a sprawling cross-country Justice Department investigation into the failed insurrection, which has already led to criminal charges against more than 270 people. Law enforcement officials estimate that about 800 people were in the mob that forced its way into the Capitol.

The crowd in Washington that day ranged from protesters who did not break any laws to a smaller group that arrived determined to commit violence against police and disrupt Congress from its duties, Wray said.

"Some of those people clearly came to Washington, we now know, with the plans and intentions to engage in the worst kind of violence we would consider domestic terrorism," he said.

In his opening statement, Sen. Dick Durbin of Illinois, the Democratic chairman of the committee, said the riot demonstrated that "for far too long, our federal government has failed to address the growing terrorist menace in our own backyard."

He accused the Trump administration of playing down the threat from white supremacists while stoking a narrative that left-wing anarchists were the greater danger to the country.

Listing a litany of mass shootings, Durbin added, "Let's stop pretending that the threat of antifa is equal to the white supremacist threat."

Wray repeatedly said in response to questions from Democratic senators that people associated with the anti-fascist movement known as antifa were not involved in storming the Capitol and that rioters were genuinely Trump supporters, not posing falsely as them.

The Capitol Police has largely shouldered the blame for the Jan. 6 attack on Congress, leading to the resignation of its chief, Steven Sund, whose requests for the National Guard were denied.

Yogananda Pittman, acting chief of the Capitol Police, has told Congress that there was a "strong potential for violence" but that authorities failed to do enough to thwart the "terrorist attack."

Indeed, there were several signs of the potential for violence Jan. 6. Federal law enforcement officials knew that members of militias such as the Oath Keepers and far-right groups such as the Proud Boys planned to travel to Washington, some potentially with weapons. Many adherents of QAnon, a conspiracy theory that has emerged as a possible domestic terrorism threat, were also expected to attend a protest rally where Trump spoke.

In addition, the FBI's Norfolk, Va., office produced a report a day earlier warning of possible war the next day. The report mentioned people sharing a map of tunnels at the Capitol complex. However, the information was unverified, and the portion that quoted "war" appeared to come from a single online thread.

The FBI provided the report to the Capitol Police, although Sund said last week that he never saw it.

Wray said the report was disseminated though the FBI's joint terrorism task force, discussed at a command post in Washington and posted on an internet portal available to other law enforcement agencies.

Though the information was raw, unverified and appeared aspirational in nature, Wray said, it was specific and concerning enough that "the smartest thing to do, the most prudent thing to do, was just push it to the people who needed to get it."

"We did communicate that information in a timely fashion to the Capitol Police and [Metropolitan Police Department] in not one, not two, but three different ways," Wray said, though he added that since the violence that ensued was "not an acceptable result," the FBI was looking into what it could have done differently.

Wray did not specifically address why no one had phoned the District of Columbia police chief, and said that he, too, had not been briefed on the information before the attack. Lawmakers did not ask Wray why it was that, in the aftermath, a senior FBI official said there had been no intelligence indicating the potential for violence that day.

Sen. Lindsey Graham, R-S.C., asked what Capitol Police leaders should have done if they had seen the Jan. 5 report.

"I really want to be careful about not to be an armchair quarterback," Wray said. He later said he did not have a "good answer" as to why Sund did not get the report.

Blumenthal also pressed Wray on the QAnon conspiracy theory that prosecutors say motivated some of the Capitol rioters, but Wray demurred when the senator tried to get the director to criticize elected officials embracing or encouraging such dark fantasies.

"We're concerned about any source that stimulates or motivates violent extremism," Wray replied.

Blumenthal said he was "frankly disappointed that you're not discouraging one of the sources of incitement, which is prominent public officials endorsing a theory that in turn resulted in storming the United States Capitol."

The FBI's warning, which was first reported by The Washington Post on Jan. 12 but has yet to be shared with lawmakers, warned of social media chatter indicating Trump's supporters were talking about creating a perimeter around the U.S. Capitol and storming inside.

The document quoted one person urging other Trump supporters to go to Washington "ready to fight. Congress needs to hear glass breaking, doors being kicked in, and blood from their BLM and Pantifa slave soldiers being spilled. Get violent. Stop calling this a march, or rally, or a protest. Go there ready for war. We get our President or we die. NOTHING else will achieve this goal."

BLM is a reference to the Black Lives Matter movement for racial justice. Pantifa is a derogatory term for antifa.

Those comments and similar calls for violence were posted on TheDonald.win, a popular discussion board among Trump supporters strategizing how to keep him in the White House even though he lost the Electoral College and popular vote, according to people familiar with the matter who spoke on the condition of anonymity to discuss a still-unfolding investigation.

Republicans on the committee were quick to point out the violence over the summer at some racial justice protests, sometimes carried out by anti-government extremists such as anarchists.

"We must examine the issue of domestic terrorism broadly, to include the left and right wing of the political spectrum," said Sen. Charles Grassley of Iowa, the top Republican on the committee.

Information for this article was contributed by Adam Goldman of The New York Times; by Eric Tucker and Mary Clare Jalonick of The Associated Press; and by Devlin Barrett and Matt Zapotosky of The Washington Post.