Stocks closed broadly lower on Wall Street on Tuesday, giving back some of their big gains from a day earlier.

The S&P 500 fell 0.8% after earlier flipping between small gains and losses. A day before, the benchmark index had leaped 2.4% for its best performance since June. Technology and internet stocks accounted for much of the selling, a reversal from a day earlier.

For weeks, investors have been focused on the bond market, where a swift recent rise in interest rates is threatening one of the main reasons for the stock market's run to records through the pandemic. Bond yields eased across the board Tuesday, but expectations for stronger economic growth in coming months continue to fuel worries that interest rates will head higher.

Higher rates force investors to rethink how much they're willing to pay for stocks, making each $1 of profit that companies earn a little less valuable. That's making Wall Street reconsider the value of technology stocks, in large part because their recent dominance left them looking even pricier than the rest of the market.

"Valuations have just become problematic across certain pockets of the U.S. [stock] market and investors are starting to realize that," said Megan Horneman, director of portfolio strategy at Verdence Capital Advisors.

Treasury yields have been climbing with expectations for economic growth and inflation, and such a rise makes borrowing more expensive for home buyers, companies taking out loans and virtually everyone else. That can slow economic growth.

The yield on the 10-year Treasury eased a bit Tuesday, falling to 1.41% from 1.44% late Monday. It's a reprieve following weeks of relentless rising. The 10-year yield had crossed above 1.50% last week, up from roughly 0.90% at the start of the year, and the zoom higher raised worries that more increases would destabilize the market.

Investors should be prepared for more risks in sectors that have driven the market's growth through the pandemic because of more inflation, according to Cliff Hodge, chief investment officer of Cornerstone Wealth.

"What's gotten us here is not likely to get us where we want to be going forward," he said.

Tech stocks were weak again on Tuesday, with those in the S&P 500 falling 1.6%. But strategists along Wall Street remain fairly optimistic, saying stocks in other areas of the market are likely to rise with expectations for the economy's improvement later this year.

Zoom Video Communications, the company whose software helps students and workers around the world talk with each other from a distance, fell 9% as concerns over slower subscriber growth offset its otherwise solid quarterly financial report and forecast.

Rocket Cos. soared 71.2%, the latest stock to be hyped in the same online forum that fueled the sharp rise in GameStop and other stocks in January. Shares in Rocket were among the most being "shorted" by hedge funds, according to FactSet. When an investor shorts a stock, they're betting that its price will go lower.

The company, which operates several personal finance brands, including Rocket Mortgage, said last week that its revenue more than doubled in the fourth-quarter, reflecting strong growth across all its businesses.

Information for this article was contributed by Joe McDonald and Christopher Rugaber of The Associated Press. 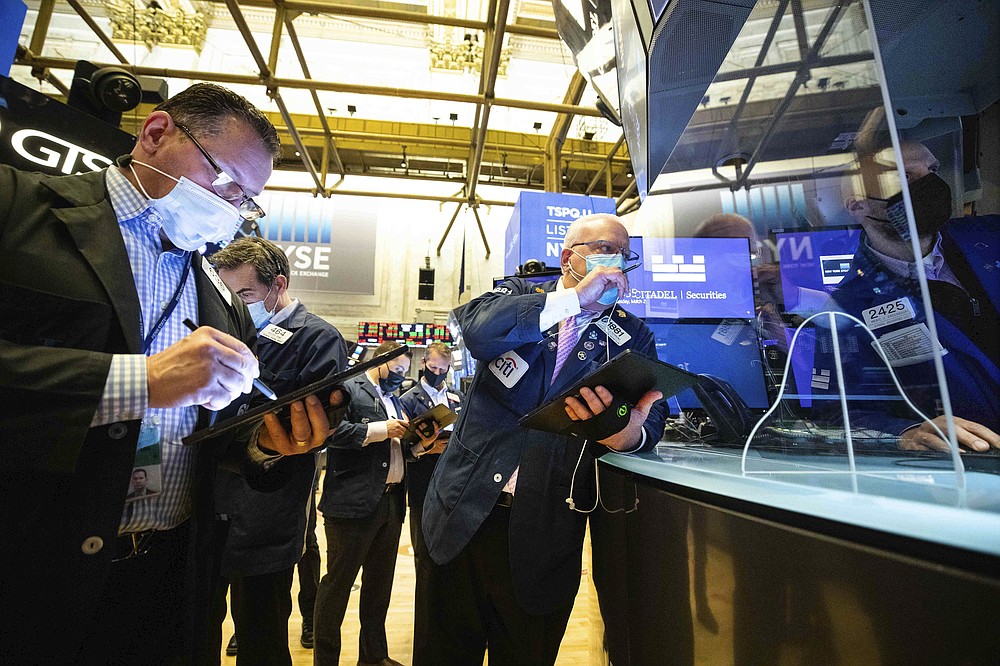 In this photo provided by the New York Stock Exchange, Thomas Ferrigno, center, and fellow traders work with specialist Meric Greenbaum, right, on the floor, Tuesday, March 2, 2021, in New York. Stocks are drifting lower in afternoon trading on Wall Street Tuesday, giving back some of their big gains from a day earlier. (Colin Ziemer/New York Stock Exchange via AP)
ADVERTISEMENT