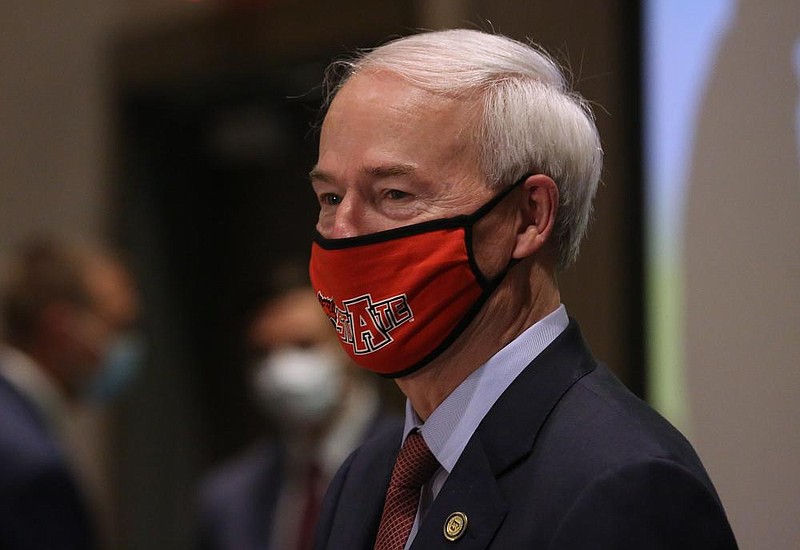 Gov. Asa Hutchinson, wearing an Arkansas State University mask listens to a question after the daily covid-19 briefing on Wednesday, May 27, 2020, at the Red Wolf Convention Center in Jonesboro. (Arkansas Democrat-Gazette/Thomas Metthe)

Gov. Asa Hutchinson on Wednesday reiterated his opposition to the way the $1.9 trillion coronavirus relief bill being considered by Congress would distribute aid to states, saying it would shortchange Arkansas by $390 million.

He said that's how much Arkansas would gain if the money were allocated based on states' populations, instead of on their unemployment rates, as currently proposed.

"You think about unemployment rates where we have worked hard to keep our economy moving," Hutchinson said. "We've had to make tough decisions in terms of our own budget.

"Other states -- not all the states made the same tough decisions, and yet they're going to be rewarded for their actions, and it's going to be at our expense."

Hutchinson made the comments during a news conference as the number of people hospitalized in the state with the coronavirus dropped below 400 for the first time since September.

The state count of covid-19 cases rose by 404 -- the third daily increase in a row that was smaller than the one a week earlier.

The number of people hospitalized with the virus fell 19, to 397, its lowest level since Sept. 18.

It was the sixth-straight day the number of people hospitalized with the virus was lower than the day before.

The state death toll from the virus, as tracked by the Department of Health, rose by seven, to 5,261.

For instance, the $2.2 trillion Coronavirus Aid, Relief, and Economic Security Act, signed by then-President Donald Trump in March 2020, distributed $139 billion to states based on their populations, with each state receiving at least $1.25 billion, which was the amount that Arkansas received.

According to the nonpartisan Tax Foundation, Arkansas would receive almost $2.9 billion under the American Rescue Plan, including almost $1.7 billion for the state and $1.2 billion to local governments.

President Joe Biden's administration has said the American Rescue Plan is focused on helping the communities that need it the most.

Hutchinson said Wednesday that he continues to oppose the legislation as being too costly.

If it does pass, though, he doesn't want Arkansas to be penalized for having low unemployment.

He said the state could use the relief money for "projects such as investment in rural broadband."

"We could use the money, if it's allocated to us on a fair basis, and we don't want to lose out on that, even though the whole package is too large."

He said he spoke Wednesday to U.S. Sens. John Boozman and Tom Cotton of Arkansas, both fellow Republicans, who had the same concerns about the distribution formula.

"They're going to fight the battle for us, and I look forward to working with them to make sure Arkansas is protected and that the states that made poor decisions are not rewarded for those poor decisions."

"It's unfair to penalize Arkansas for successfully reopening businesses and schools, as well as our decreasing unemployment rate," Lasure said in an email.

Cotton's office said it didn't have a comment on the issue Wednesday.

Despite the drop in hospitalized patients, the number of virus patients who were on a ventilator rose by 11, to 91, after falling for the previous five days.

Similarly, the number of covid-19 patients in intensive care rose by five, to 165.

State Epidemiologist Jennifer Dillaha said she was encouraged by the relatively small number of new cases and drop in hospitalizations.

She credited the cold and snow last month for slowing the spread of the virus.

The state's vaccination efforts also appear to be contributing, she said.

"I think we're also potentially starting to see some herd immunity in communities, either through vaccination or natural infection," she said.

But she said Arkansans should keep taking precautions to avoid catching or spreading the virus.

"I think people should continue to wear their masks and practice social distancing and avoid crowds," she said. "I think that's an important strategy right now to keep the spread of covid 19 as low as possible while we get everyone vaccinated."

Although Hutchinson on Friday turned most of the Health Department's covid-19 directives into nonbinding "guidance," Dillaha said Arkansans should keep following them.

She said people should also avoid restaurants and other businesses where people are crowded and not wearing masks.

Dillaha also said Wednesday that the bulk of the 24,400 doses of the Johnson & Johnson vaccine Arkansas is expected to receive this week will be administered to poultry industry workers, who became eligible for the vaccine on Tuesday along with other food processing workers.

"It's a single-dose vaccine, and it's refrigerated, which makes it more convenient and efficient to vaccine that population," Dillaha said.

Other Johnson & Johnson doses will go toward vaccinations for employees of higher education institutions.

"The larger campuses have had more difficulty acquiring all the doses that they need," Dillaha said.

"The smaller campuses have found it more easy to do that apparently."

She said Walmart stores in Arkansas were also expected to receive an additional 5,100 doses of the Johnson & Johnson vaccine this week, along with 9,100 Moderna doses, as part of a federal program.

The Federal Retail Pharmacy Program for Covid-19 Vaccination also was expected to supply pharmacies participating in the Community Pharmacy Enhanced Services Network with 9,380 doses of the vaccine developed by Pfizer and BioNTech, she said.

According to the U.S. Centers for Disease Control and Prevention, pharmacies, hospitals and other providers participating in the vaccination effort being coordinated by Arkansas will receive enough doses of Pfizer vaccine next week to provide initial shots to 37,440 people, an increase of 2,500 from the number of initial doses the state was allocated this week.

The state also will receive 28,900 initial doses of the Moderna vaccine, the same amount it was allotted for this week.

After this week's deliveries of the Johnson & Johnson vaccine arrive, Dillaha said Arkansas isn't expected to receive any more for about a week.

The state's weekly allocation of that vaccine will be smaller than the initial allotment, she said.

"We haven't been told, but we estimate it will probably be about 2,000 doses a week," Dillaha said.

According to the Health Department, providers participating in the effort coordinated by the state had received 977,710 doses of vaccine as of Wednesday morning, up by 1,800 from the total as of a day earlier.

In addition, Walmart, Walgreens, CVS and Community Pharmacy Enhanced Services Network pharmacies had been allotted a total of 91,070 doses through federal programs, a number that hadn't changed from a day earlier.

The doses those providers reported having administered rose by 2,413, to 46,060.

According to the CDC, 442,371 Arkansans, or about 14.7% of the state's population, had received at least one vaccine dose as of Wednesday.

Also on Wednesday, the American Health Care Association, which represents nursing homes, issued a news release highlighting the drop in covid-19 cases in Arkansas' 225 nursing homes since they completed their second round of vaccination clinics.

A report by the Health Department on Monday listed 70 cases among nursing home and assisted living facility residents and 61 cases among workers at the facilities within the past two weeks.

That was down from 1,238 cases among residents and 1,033 among workers within the previous two weeks that were listed in a Health Department report on Dec. 28, Rachel Bunch, executive director of the Arkansas Health Care Association, said.

The declining number of cases has meant that more homes have been allowed to open for routine visitation, Bunch said.

She said she's hoping that, as cases fall nationwide, federal rules on such visits will be relaxed.

"We're looking forward to fewer restrictions on the visits that we're allowed to have," such as by allowing more in-room visits and closer contact between residents and visitors, she said.

The cases that were added to the state's tallies on Wednesday included 284 that were confirmed through polymerase chain reaction, or PCR, tests.

The number of cases that were considered active rose by 24, to 4,278, as 373 Arkansans were newly classified as having recovered.

Among prison and jail inmates, the Health Department's count of cases rose by five.

Eight cases at the West Memphis lockup and four at the Osceola facility were active as of Wednesday, she said.

All seven deaths reported Wednesday were among confirmed cases, raising the toll among such cases to 4,272.

The state count of virus deaths includes 989 among probable cases.

Among nursing home and assisted living facility residents, the count of virus deaths grew by one, to 1,988.

The number of people who have ever been hospitalized in the state with the virus grew by 31, to 14,826.

The number of state virus patients who have ever been on a ventilator rose by two, to 1,521.