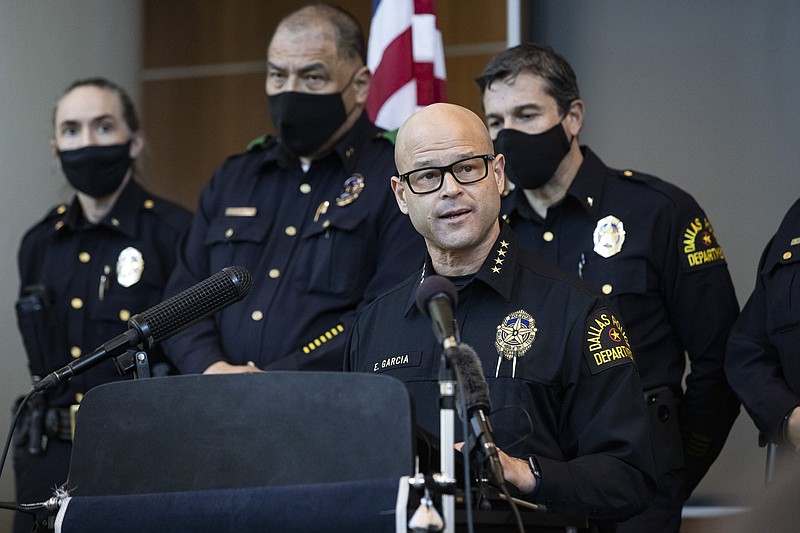 Chief Eddie García, center, speaks with media during a press conference regarding the arrest and capital murder charges against Officer Bryan Riser at the Dallas Police Department headquarters on Thursday, March 4, 2021, in Dallas. Riser was arrested Thursday on two counts of capital murder in two unconnected 2017 killings that weren't related to his police work, authorities said. Riser, a 13-year veteran of the force, was taken into custody Thursday morning and brought to the Dallas County Jail for processing, according to a statement from the police department. (Lynda M. González/The Dallas Morning News via AP)

DALLAS -- A Dallas police officer was arrested Thursday on two counts of capital murder, more than a year and a half after a man told investigators that he kidnapped and killed two people at the officer's instruction in 2017, authorities said.

Bryan Riser, a 13-year veteran of the force, was arrested and taken to the Dallas County jail, according to a statement from the Police Department. A lawyer for him couldn't immediately be identified.

Riser was arrested in the unconnected killings of Liza Saenz, 31, and Albert Douglas, 61, after a man came forward in August 2019 and told police that he had kidnapped and killed them at Riser's direction, Police Chief Eddie Garcia said during a news conference. He said investigators don't know the motives for the killings, but that they were not related to Riser's police work.

A police affidavit states that Riser told the hired killer that Saenz was an "informant." The document does not elaborate, and police did not immediately respond to questions about whether Saenz had some connection to the department.

Garcia did not explain why Riser was arrested nearly 20 months after the witness came forward, and police did not immediately respond to questions about the timing. Riser joined the department in 2008, and Garcia acknowledged that he had been patrolling Dallas while under investigation in the killings.

Saenz's body was pulled from the Trinity River in southwest Dallas on March 10, 2017, with several bullet wounds, the chief said. Douglas was reported missing that year and his body hasn't been found.

Lawmaker out in first-ever N.D. expulsion

BISMARCK, N.D. -- The North Dakota House on Thursday expelled a lawmaker accused of threatening and sexually harassing women at the Capitol.

The Republican-controlled chamber voted 69-25 on a resolution to expel GOP state Rep. Luke Simons, marking the first time since statehood a lawmaker has been kicked out of the Legislature.

Simons, who has denied wrongdoing and refused Republican leaders' calls for him to resign, is accused of a pattern of sexually aggressive, lewd, and threatening behavior, dating to shortly after he took office in 2017.

The resolution to expel Simons was crafted by Democratic and Republican House leaders.

Simons, a 43-year-old rancher and barber who is married and has five children, has said the allegations "have been totally misconstrued and taken out of context." He has insisted on social media that he's being targeted for his politics.

Simons' attorney, Lynn Boughey, said he believes the House cannot expel Simons and can only impeach him, which would require a Senate trial.

Legislative leaders and their lawyers note that the North Dakota Constitution says either chamber can expel a member with two-thirds approval.

WASHINGTON -- The U.S. Supreme Court on Thursday made it harder for longtime immigrants who have been convicted of a crime to avoid deportation.

Justice Neil Gorsuch wrote the opinion for a 5-3 conservative majority that ruled against a Mexican citizen who entered the U.S. illegally and has lived in the country for 25 years.

The man, Clemente Avelino Pereida, had been charged in Nebraska with using a fraudulent Social Security card to get a job and convicted under a state law against criminal impersonation.

Not all criminal convictions inevitably lead to deportation, but Gorsuch wrote for the court that Pereida failed to prove he was not convicted of a serious crime.

Under immigration law, "certain nonpermanent aliens seeking to cancel a lawful removal order must prove that they have not been convicted of a disqualifying crime," Gorsuch wrote.

In a dissent, Justice Stephen Breyer wrote that the court should have ruled in Pereida's favor because he was convicted of a less-serious crime that would have allowed him to stay.

HOUSTON -- A shooting by a police officer in Houston injured a baby boy and killed a man who was driving a car linked to several robberies, authorities said.

Officers tried to pull over a black Mercedes about 11:30 p.m. Wednesday because the car had been connected to several aggravated robberies, Houston Executive Assistant Police Chief Troy Finner said. The driver did not stop, crashed and then ran to a gas station, where a woman was pumping gas, Finner said.

The man jumped into the woman's vehicle and a responding officer saw that he had a gun. The officer opened fire, killing the man but also striking a 1-year-old boy who was in the back seat, Finner said.

The officer did not know the boy was in the vehicle, Finner said.