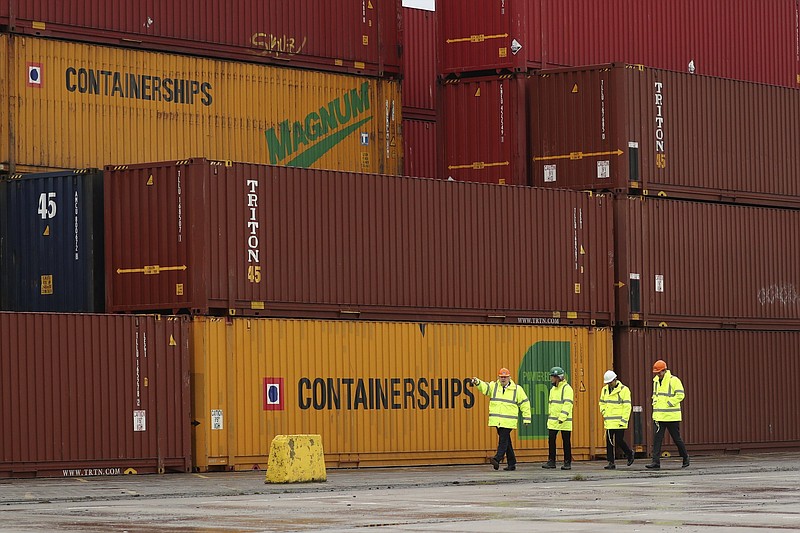 Britain's Prime Minister Boris Johnson, left, and Chancellor of the Exchequer Rishi Sunak, second right, walk past shipping containers during a visit to Teesport in Middlesbrough, England, Thursday, March 4, 2021. Britain's Chancellor Rishi Sunak and Prime Minister Boris Johnson visited the north east following the Budget announcement that the Treasury and other government departments will be sited on an economic campus in Darlington and that Teeside and The Humber would be among eight new freeports in England. (AP Photo/Scott Heppell, pool)

LONDON -- The U.S. agreed Thursday to suspend millions of dollars' worth of tariffs on imports from the United Kingdom including Scotch whisky as part of an effort to resolve a long-running trans-Atlantic trade dispute over aerospace subsidies.

The U.S. government will suspend tariffs for four months on a range of goods, the two countries said in a joint statement, in the latest move to de-escalate trade tensions centered around aid for Boeing and Airbus.

Former U.S. President Donald Trump's administration had imposed tariffs in 2019 on $7.5 billion worth of European goods in retaliation for state support given to Airbus.

Britain was targeted along with the other three stakeholders in Airbus -- Spain, France and Germany -- for more tariffs than other countries.

The EU retaliated with tariffs on up to $4 billion of U.S. goods over subsidies to Boeing, but the U.K. offered an olive branch to the U.S. by announcing it would suspend tariffs from January, an offer that President Joe Biden's administration has now moved to reciprocate.

"This will allow time to focus on negotiating a balanced settlement to the disputes, and begin seriously addressing the challenges posed by new entrants to the civil aviation market from non-market economies, such as China," the joint statement said.

Distillers of Scotch whisky -- the U.K.'s largest food and drink export last year -- cheered the news that the 25% tariff would be cut to zero.

Scotch exports to the U.S. fell by a third since the tariffs were imposed 16 months ago, costing the industry about $700 million, the Scotch Whisky Association said.

"Suspending these tariffs -- stemming from a trans-Atlantic trade dispute that had nothing to do with us -- and a return to tariff-free trade with the U.S. means livelihoods and communities across Scotland will be protected," said the trade group's chief executive officer, Karen Betts.

Biden's trade strategy will look to incorporate sustainable environment goals, advance racial equity and partner with friends and allies, according to an annual report released by the office of the U.S. Trade Representative on Monday.

Biden's report makes prominent reference of using trade to spur America's recovery, in line with his broad "build back better" agenda. The report reflects Biden's efforts to reset relationships globally after historic allies including Canada and the European Union criticized Trump for hitting them with tariffs on national-security grounds, and after his administration decided to leave the Paris climate agreement.

One important continued objective: holding China accountable. Biden's trade policy will use all available tools to tackle Beijing's unfair practices and make addressing the persecution of the Uighur minority in the Xinjiang region a top priority, according to the 2021 report. That echoes Trump's focus on China last year, shortly after his administration reached a pact with its top trading partner.

Biden inherited numerous trade initiatives from Trump, including tariffs applied on about $335 billion of Chinese goods annually, and his administration is undertaking a comprehensive review of policy toward the Asian nation. In the agreement reached in 2020, China promised to purchase more American products, but missed last year's target as covid-19 upended shipping and supply chains.

Biden's nominee for trade representative, Katherine Tai, is currently awaiting Senate confirmation. At her hearing last week, she told senators that China needs to live up to the commitments in its trade pact with the U.S. -- the strongest signal yet that the new administration plans to build on the accord brokered by its predecessor rather than scrap it.

Information for this article was contributed by staff members of The Associated Press and by Eric Martin of Bloomberg News (TNS).