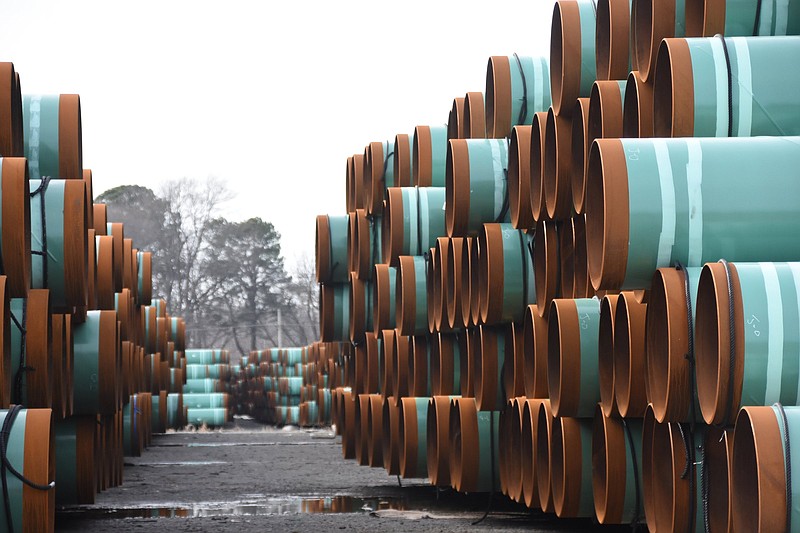 The Port of Little Rock’s proposed strategic plan — that its governing board will take up as soon as this month — includes an emphasis on shoring up the port’s bottom line.

“Every project or activity undertaken by the Port should be driven by the need to produce revenue” according to the document.

The attention to fiscal matters comes as revenue for the largest port on the Arkansas River sank dramatically in January and left it with a small operating loss.

“It’s a modest loss, but it is a loss,” Bobby Brown told fellow members of the Arkansas Port Authority board at its regular meeting last month. “I don’t see this turning [around] quickly.” Brown, president and chief executive officer of Interstate Signways, the leading producer of highway signs in America, serves as the board’s treasurer. He has been a board member since 2016.

T h e p o r t t o o k i n $245,062.46 in income in January, primarily from its rail switching operations, which totaled $114,893, according to the port’s statement of revenue and expenses for the first month of the year.

The railroad switching income fell even more sharply. The January total was 60% smaller than the $281,370 it collected in the same month in 2020.

After expenses, which he and other port officials say are relatively static, the port finished January with an operating deficit of $36,707.53. The budget projected the port would finish January with $20,787.44 in the bank. For the year, the budget anticipates the port to finish with just under $1 million in income after expenses.

Bryan Day, the port’s executive director, has blamed the covid-19 pandemic and the economic lockdowns used to try to contain virus on the decline in port activity over the past year. The lockdowns began in March 2020.

Other factors also are at play in the drop in port activity, perhaps none more significant than President Joe Biden’s decision to cancel the permit for the Keystone XL pipeline, a nearly 1,200-mile project intended to carry crude oil from Canada to Nebraska to connect with a pipe network to deliver the oil to refineries on the Gulf of Mexico.

Welspun Tubular LLC, a port tenant that Day has said generates more revenue for the port than any other tenant, won an order last year to produce more than 1 million feet, or 190 miles, of 36-inch pipe for the $8 billion project. It was an order that allowed Welspun to avoid a major reduction in its 600-person workforce, according to company officials.

That work has stopped on the company’s 740-acre site within the port. Welspun, which opened its $150 million facility in 2009, was a significant user of rail and barges. The port makes money on every rail car it moves within the port — about 20,000 such movements annually that was estimated to produce $2.4 million of the port’s projected $3.6 million in income in 2021.

And although new companies have been brought to the port, most notably the Amazon.com fulfillment center that will add more than 1,000 workers to the estimated 4,000 people the port’s some 40 tenants already employ, they won’t come close to filling the void in rail and barge use that Welspun can command.

The Port, established in 1959, is on the 448-mile Mc-Clellan-Kerr Arkansas River Navigation System, which runs from the Mississippi River to 15 miles east of Tulsa. The port features a 2,640-acre industrial park, two full-service river terminals, its own switching railroad and a slack water harbor.

The proposed update to the port’s 2015 strategic plan, which began last fall, places more emphasis on attracting tenants that will generate revenue for the port.

One of its priorities is to develop acquire and operate an industrial park elsewhere in the city for Amazon.com-like facilities that don’t contribute to the port’s bottom line.

“Properties within the Port Industrial Park and its planning boundaries are valuable because of their proximity to river and rail, but there is an increasing pressure to use that land for truck-related distribution facilities and other non-river/rail uses, which limits the Port’s profitability and self-sufficiency,” according to the proposed strategic update. “The Little Rock Port Authority has become a de facto economic development entity for the City of Little Rock and could, with appropriate city financing, expand that role to other areas, meanwhile preserving existing river/rail properties for just those uses.” The stated action, if adopted, however, was at this point limited to working with city leadership to assess the need for and identify the resources for a non-river industrial park.

In calling for every project or activity undertaken by the port to produce revenue for the port, the strategic planning update suggests the port staff will review everything it does with an eye toward generating money or saving money.

If the document is adopted, the port would establish an internal land-use plan that sets aside property only for the use of river and rail users with the approval of the port’s board.

The port also would establish a policy that “strongly encourages” leasing its property rather than selling it, and also adopt best practices in structuring real-estate transactions.

“In the past, the port’s interests have not always been secured in real estate sales, so that promised river and rail users did not meet their performance targets or left the port altogether, retaining possession of the land and depriving the port of valuable revenue,” according to the strategic planning document.

Port officials also want to “explore revenue enhancement possibilities [and] implement where feasible.” They include operating a food court or providing food services; creation of and sublease of a communications tower and a port warehouse, handling mowing and maintenance in house, establishing a wetlands bank, leasing a digital billboard and perhaps even managing the docks and performing stevedore work in-house.