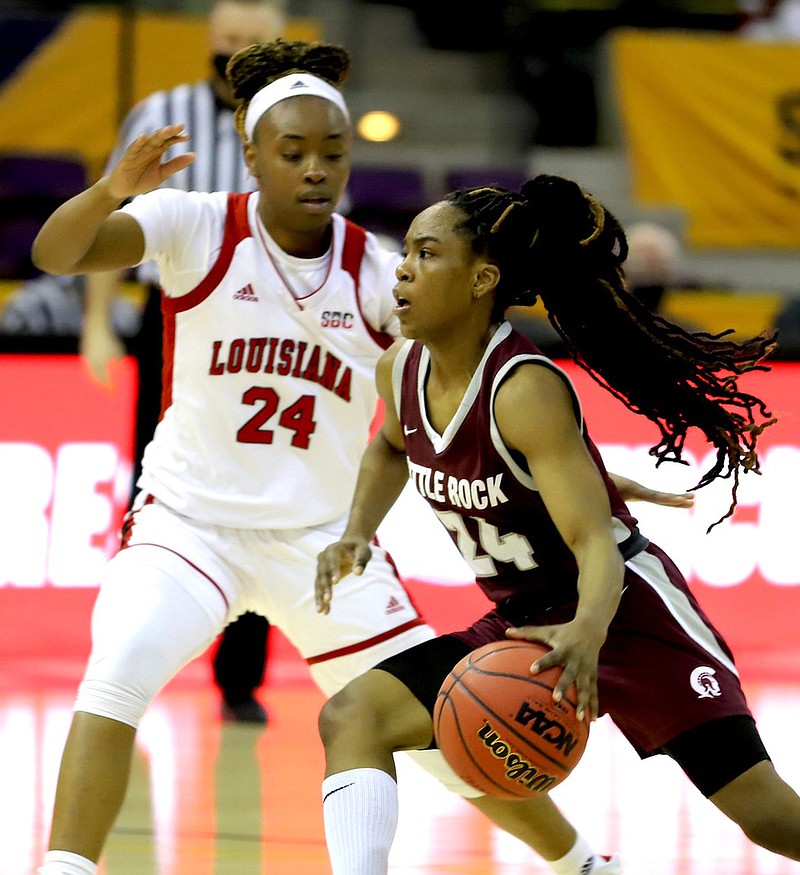 A 17-3 Louisiana-Lafayette scoring run that spanned the closing minutes of the first half and the opening 3:10 of the second sank the University of Arkansas at Little Rock, which fell to the Ragin' Cajuns 58-48 in the semifinals of the Sun Belt Conference Tournament on Sunday at the Pensacola Bay Center in Pensacola, Fla.

The shorthanded Trojans (15-11) shot 58.3% from the field in the first quarter and led 28-27 at halftime before senior Teal Battle fell into foul trouble in the third quarter. She spent seven minutes on the bench in the second half and UALR faded without her, as the Trojans were outscored 31-20 in the final 20 minutes.

"With limited personnel, it was really tough," UALR Coach Joe Foley said. "We kind of ran out of juice. I thought we fought really hard the last few games."

Battle picked up her third foul with 7:04 remaining in the third quarter, and UALR's leading scorer finished with eight points on 4-of-14 shooting. Ragin' Cajuns junior Brandi Williams scored a game-high 16 points, including 13 in the decisive second half, and Louisiana-Lafayette (16-5) went 14 of 14 from the free-throw line en route to its fourth victory over UALR in 2020-21, advancing to tonight's championship game against Troy, a 66-63 winner over Appalachian State in Sunday's other semifinal.

Sophomore Ky'lie Scott and junior Mayra Caicedo led the Trojans with 11 points each and combined for six made three-pointers. Caicedo added six assists.

Williams finished 6 of 6 from the free-throw line and was joined in double figures by senior Jomyra Mathis with 11 points. UALR produced eight points in the fourth quarter, and the Trojans didn't make their first trip to the free-throw line until there were only 23 seconds left in the contest.

"[Louisiana-Lafayette] was just a little too tough for us, " Foley said. "They've been through the mill. They've got a good ball club. I thought we competed hard, but their experience in the second half took over."

Scott and Caicedo made three-pointers on the Trojans' first two possessions of game, and UALR held an early 8-3 lead. UALR endured a 3:13 dry spell, and Mathis and fellow senior Kimberly Burton combined for nine points, but Battle scored the Trojans final six points of the quarter to give the Trojans a 17-13 lead.

UALR went up 28-21 with 2:50 remaining in the half on back-t0-back baskets by Iradier and Scott. The Ragin' Cajuns narrowed the gap with a 6-0 stretch that featured four points from senior Ty'Reona Docuet to close the half.

The extended run carried over into the third quarter, which began with Williams scoring eight consecutive points on five free throws and a three-pointer. Sophomore Makaiya Hallmon followed with a deep triple, handing Louisiana-Lafayette a 38-31 advantage. The Ragin' Cajuns scored 17 points over the 7:01 run dating back to the second quarter and never trailed again.

"We got going in the third quarter and hit some big shots," Louisiana-Lafayette Coach Gary Brodhead said. "When you shoot the ball better, you seem to play better defense and I think it carried over on both sides of the ball."

Battle suffered a hard fall at the 5:16 mark, and Harvey and Scott pulled UALR within two as trainers evaluated Battle on the sidelines. The 6-1 forward returned with 2:07 remaining the quarter before picking up her fourth foul in the closing minute, and the Trojans entered the fourth quarter down 45-40.

Louisiana-Lafayette began the final quarter with an 11-4 run and led 56-42 on Mathis' free throws with 6:12 left to play, opening the Ragin' Cajuns' largest lead. UALR scored six points in the final 8:34.