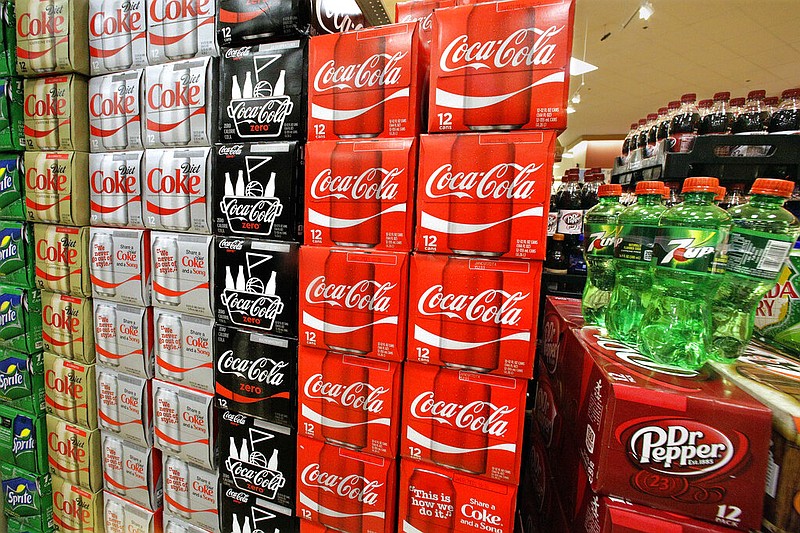 Sodas and energy drinks are stacked at a grocery store in Springfield, Ill., in this May 18, 2016, file photo. (AP/Seth Perlman)

A House committee is weighing a bill backed by Gov. Asa Hutchinson that would phase out the state's soft drink tax by 2025 and make up the loss of it as a source for the state's Medicaid trust fund by using general revenue.

Rep. Joe Jett, R-Success, chairman of the House Revenue and Taxation Committee, Tuesday delayed the panel's vote on House Bill 1546 by Rep. Lanny Fite, R-Benton, after a hearing that lasted an hour and a half.

"Let everybody know that we are not trying to do this in a dark room behind an alley someplace," Jett said at the end of the committee's meeting. "We are trying to operate in a fair, an open and honest manner.

"I think I heard somebody reference a while ago that corporate America is cramming this down this committee's throat and I assure everybody that that's not taking place or we would have took the vote today and it would have come out of committee today," he said.

The backers of the bill include the ARBEV soft drink industry lobby, Coca-Cola Consolidated, and the Arkansas Grocers and Retail Merchants Association.

The tax is levied on the sale of soft drink syrup or simple syrup at the rate of $1.26 per gallon, and bottled soft drinks, powders and base products at the rate of 20.6 cents per gallon that may be produced, the state Department of Finance and Administration said in its legislative impact statement on the bill.

Distributors, manufacturers and wholesalers are required to collect the tax.

HB1546 would provide a mechanism to transfer state general revenue to the Medicaid trust fund in amounts that reflect the projected fiscal impact from the three-year reduction and elimination of the soft drink tax, the finance department said.

The bill would require a two-thirds vote of the House and the Senate because it would reduce and ultimately repeal a state law -- Act 7 of the 2nd Extraordinary Session of 1992 -- that was confirmed by a referendum vote in the 1994 general election, the finance department said.

"It started out as a temporary tax and it was supposed to last about three years, and 28 years later the tax is still on," Fite told the House tax committee.

An earlier cut in the soft drink tax was in Act 141 of 2017, which also exempted military retirement benefits from income taxes, said Paul Gehring, an assistant revenue commissioner for the finance department.

The 2017 law also authorized the transfer of $3 million in general revenue to the Medicaid trust fund in fiscal 2018 to offset the reduction and $5.9 million in fiscal 2019 and each subsequent fiscal year, according to the finance department.

Arkansas and West Virginia are the only states with this type of soft drink tax and "it has hurt the ability of the soft drink industry to compete with the surrounding states," Fite said.

"This tax is unfair to consumers, to restaurants and the hardest hit sector during this pandemic has been the restaurants, in my opinion," he said. "The Medicaid trust fund will remain whole."

Hutchinson said Friday that eliminating the soda tax "has been a priority of mine because having the tax puts Arkansas at a competitive disadvantage.

"Most states don't have a special tax for soda syrup, and getting rid of that tax will be another message that we want to have a tax code that is fair and pro growth," the Republican governor said in a written statement.

Tim Leathers is a lobbyist representing ARBEV as well as a former state revenue commissioner. Leathers told the House committee that the soft drink tax amounts to almost 2 cents per can of soda to a consumer, plus the state's sales tax also is levied on that purchase.

Luke Mattingly, CEO for Carelink, representing the Arkansas Association of the Area Agencies on Aging, asked the committee Tuesday: "Who in this room believes that a can of Coke is going to be reduced by 2 cents for a consumer if this [bill] passes?

"Eliminating the tax will only benefit a few corporations and their future partners, leaving future legislators holding the bag to annually find $40 million in offsetting general revenue for the Medicaid trust fund," he testified.

Zac Bradley, government relations director for Coca-Cola Consolidated, said Friday in a written statement, "The soft drink tax is not paid by a handful of businesses or corporations. It not only affects distributors, but also thousands of retailers that sell our products to the public.

"This hidden tax, along with the duplicative sales tax, artificially inflates the price of soft drinks paid by millions of Arkansans," he said.

Steve Goode, executive director of the Arkansas Grocers and Retail Merchants Association, told lawmakers that the state's soft drink tax is a competitive issue for small businesses, particularly for stores on the state's borders, such as those in Bella Vista, Marion, Texarkana, West Memphis and across the northern stretch of Arkansas.

"Everybody is talking about 2 cents a can," Goode said. "Just imagine every 12 pack you buy, every time you buy one, it costs you 23 cents. That's not a lot, but it adds up over the course of the year."

"This bill will keep hometown grocers, C-stores and restaurants in business."

The Medicaid trust fund had a balance of $212 million as of Feb. 28 and the total general revenue used for the Medicaid program in fiscal 2021 is $1.3 billion, said Jake Bleed, the state's budget administrator.

The size of the Medicaid trust fund's balance is partly because the federal government is paying a higher matching rate during the covid-19 pandemic, so the state pays less than it would have otherwise for its share of Medicaid spending. However, the increased federal match rate will not continue forever, the Arkansas Health Care Providers Forum said in a letter to House Speaker Matthew Shepherd, R-El Dorado.

"In terms of the Medicaid trust fund, there is a specific requirement in the bill that general revenues must be transferred to assure there is no reduction to the trust fund," Hutchinson said.

Bo Ryall, CEO of the Arkansas Hospital Association, said neither the 1992 law nor the 1994 referendum "had any type of language stating it was a temporary tax.

"We have no guarantees that future governors and the Legislatures will honor this legislation [to replace the soft drink tax revenue with general revenue] that would then take a simple majority vote to change," he said.

"The result of this legislation, if passed, will provide a tax benefit to a few while jeopardizing Medicaid funding and overriding a 55% vote of the people of Arkansas and ultimately not reducing the price of a soft drink," he said.

Rep. Julie Mayberry, R-East End, told her colleagues that the soft drink tax is "this little piece of security that was voted on by people to make sure that we don't have the shortfall [in Medicaid funding].

"We can make all the promises in the world that we want to make as legislators, but we are only here for two years," she said. "We are only guaranteed these two years and our governor is also going to be gone in two years, so until we have true guarantee I just can't do this."

But Rep. Jim Wooten, R-Beebe, disagreed with Mayberry about the bill.

"What I am pledging and I sure hope I speak for my colleagues, we are not going to let you down" by not providing general revenue to replace the eliminated soft drink tax revenue he said.

"We are not going to impact your people," Wooten said at Tuesday's meeting. "We support them. My area agencies on aging. My hospital administrator. I have talked to all of them and I have assured them we are here to protect them. We are here to care for the less fortunate."

Fite said Friday he will eventually ask the House committee to vote on the bill, but doesn't know how it would fare in the Senate.

Senate President Pro Tempore Jimmy Hickey, R-Texarkana, said Friday he is part of a group of senators who are trying to figure out whether the state can afford more tax cuts beyond the income tax exemptions related to the pandemic and unemployment benefits.

"We are still looking at the macro part," he said.