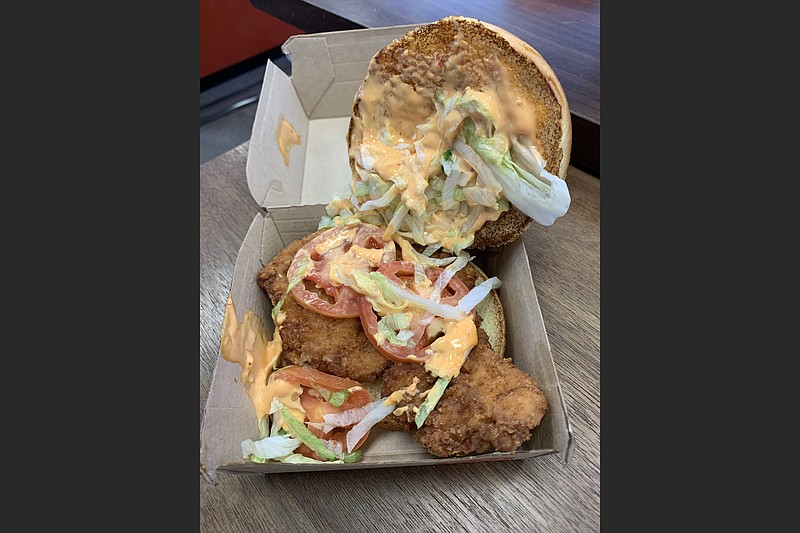 McDonald's Crispy Chicken Sandwich replaces the McChicken. A deluxe version of the sandwich adds shredded lettuce, Roma tomatoes and mayonnaise, or in this case, Spicy Pepper Sauce. (Special to the Democrat-Gazette)

We're giving local restaurants' takeout offerings a break this week and picking on — sorry, picking up — some recent menu additions at fast-food chains.

WHAT IT IS: McDonald's appears to have been significantly stung by the popularity of Popeyes' big chicken-breast sandwich, which caused an enormous stir some time back and seemingly caught that chain by surprise, creating long lines and selling out, so that it was absent from stores for several months. And so, competitors have also been stepping up to peddle better chicken sandwiches (see below).

HOW GOOD IS IT? In the interests of total disclosure, we didn't actually buy our chicken sandwiches — one of the local franchisees packaged pairs of all three sandwiches so we could try them out. They also provided fries and some soft drinks; what we didn't eat, we donated to colleagues.

The basic chicken breast is definitely an improvement over the old one. And it is recognizably actual chicken as opposed to — well, whatever it used to be. But it still lags behind the hefty, spicy-batter-coated breast from Popeyes, which remains the standard, and the new one from Zaxby's (see below). The spicy version gets its considerable heat from the sauce, which packs a pretty good pepper punch, not from the coating on the chicken breast, which is, as far as we can tell, the same. The deluxe sandwich is quite a handful; we're not big fans of tomatoes on sandwiches, but these were small and apparently fresh, so we picked them off and ate them separately. Ours came, not with the promised mayo, but with the Spicy Pepper Sauce.

The basic and spicy sandwiches come in foil-lined pouches, similar to the ones in which Popeyes and Zaxby's package theirs, which helps them retain heat and moisture. The deluxe sandwich comes in a cardboard clamshell like the one in which McDonald's vends its Quarter Pounders. 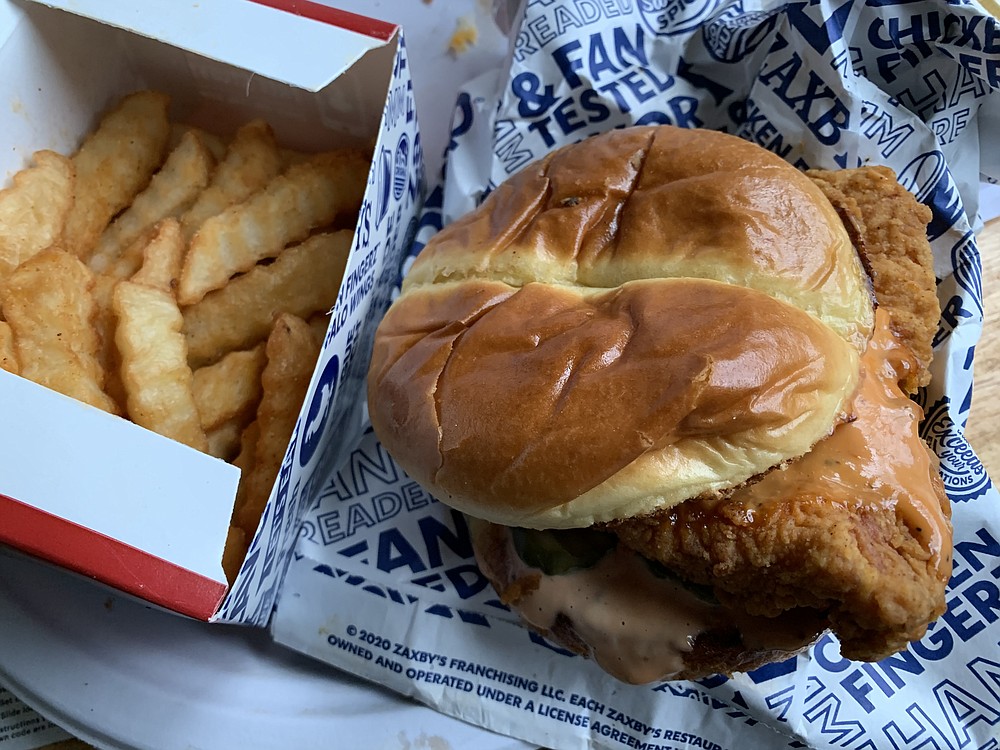 Our original plan was to cover Zaxby's General Tso's Boneless Wings ($6.99), five "boneless wings" in a new spicy General Tso's sauce, packaged with fries, Texas toast, celery and "ranch sauce" (not, you will notice, "ranch dressing") and a 22-ounce soft drink. However, it was a limited-time special and its time ran out before we could get something into print. C'est la poule. (In case you're curious, or Zaxby's reintroduces it, the sauce is spicier than most Chinese versions of General Tso's, with some body and a nice spicy kick, but the "boneless wings" were chewy and rather mealy. The crinkle fries were top-notch, though.)

WHAT IT IS: Zaxby's being a chicken establishment, one would expect great things from the recently introduced Signature Sandwich, which the online menu describes as "a big ol' white breast meat fillet that's been double hand-breaded in our new, extra crispy breading, dressed with our famous Zax Sauce and three thick-cut pickle chips on a buttery, toasted, split-top potato bun."

HOW GOOD IS IT? And the sandwich lives up to expectations, coming fairly close to Popeyes' standard bearer, in fact: a monster, fresh-tasting chicken breast with a thick, crispy coating. The vermilion Zax Sauce that's supposed to enliven it doesn't do much except to make the sandwich messier. The fries, which we had enjoyed with our General Tso's wings, were, however, considerably less crisp this time around. 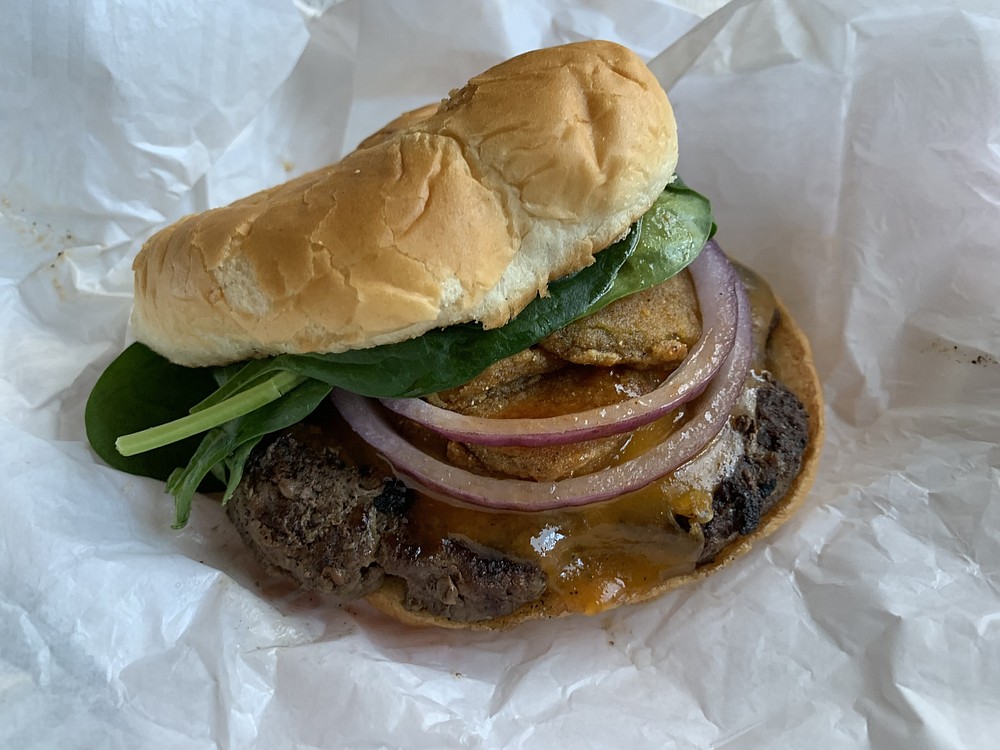 WHAT IT IS: Backyard Burgers, which used to have outlets spread across the landscape, is down to just one in Little Rock, on North Shackleford Road, north of West Markham Street. This new burger centers on their good-size patty topped with honey barbecue sauce, fried pickles, cheese, red onions and what in their photo looks like a crinkly lettuce but on our burger was baby spinach or perhaps some kind of small-leaf lettuce, all on a brioche-style bun.

HOW GOOD IS IT? We enjoyed the hefty burger patty — we've always enjoyed Backyard's charcoal-grilled burgers — and the toppings made for an interesting mix of tastes and textures. (We admit to having shed the onions.) 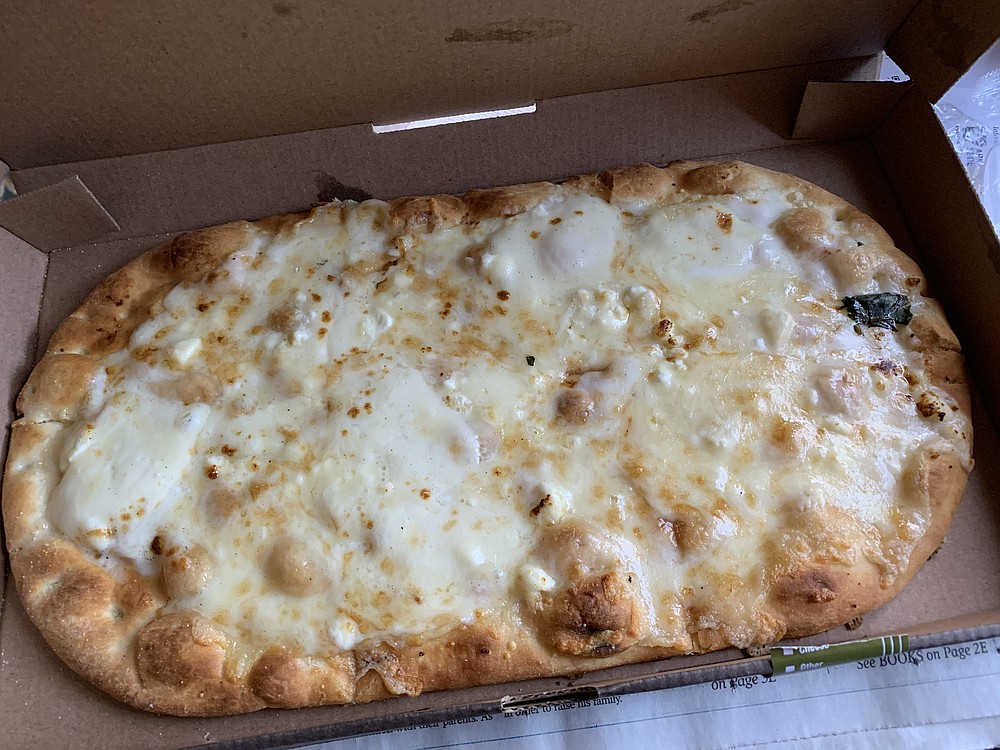 WHAT IT IS: An oblong flatbread serves as the crust, underneath mozzarella, grated parmesan, feta crumbles and "our Fontina and mozzarella cheese blend," with a garlic-flavored cream sauce.

HOW GOOD IS IT? This is a cross between pizza and garlic bread; while it's hot, it's a taste treat, but as it cooled, the cheeses coagulated and separated out, so that the small slices of mozzarella were easily peeled away. If you are feeding two people, there's a good chance you'll have finished it before this happens; since we were serving only one, the cheese issue caused us to toss the last couple of slices.

We didn't try the pepperoni version; it's topped with pepperoni, mozzarella and the Fontina-mozzarella blend with a tomato-bell pepper sauce. 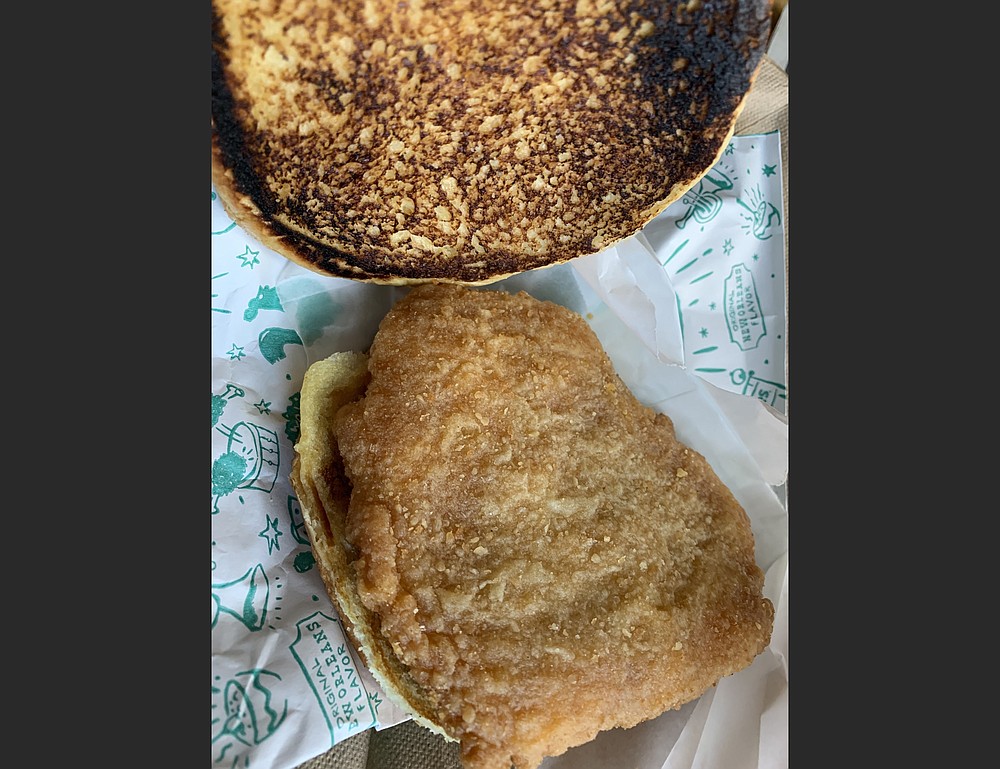 Popeyes' Cajun Flounder Sandwich doesn't quite capture the lightning in a pouch that was its highly successful chicken sandwich. (Arkansas Democrat-Gazette/Eric E. Harrison)

WHAT IT IS: Speaking of Popeyes, as we have been throughout this little essay, the chicken chain is on a fishing expedition, apparently attempting to recapture the lightning in a pouch that was its chicken sandwich with this limited time special. It's an irregularly shaped flounder filet with a somewhat spicy Cajun breading, sitting on "crisp barrel cured pickles" and topped by tartar sauce on the same "warm and toasted buttery brioche bun" on which the chicken sandwich comes.

HOW GOOD IS IT? The formula doesn't work quite as well for fish as it does for chicken. The breading isn't nearly as thick, of course, and the fish isn't as firm, actually becoming a little bit gooey in spots — keeping it moist in the pouch may have actually worked to its disadvantage. The Cajun spice gives it a bit of a kick. We're not fans of tartar sauce, which might have given it an additional flavor dimension if we hadn't asked them to hold it. 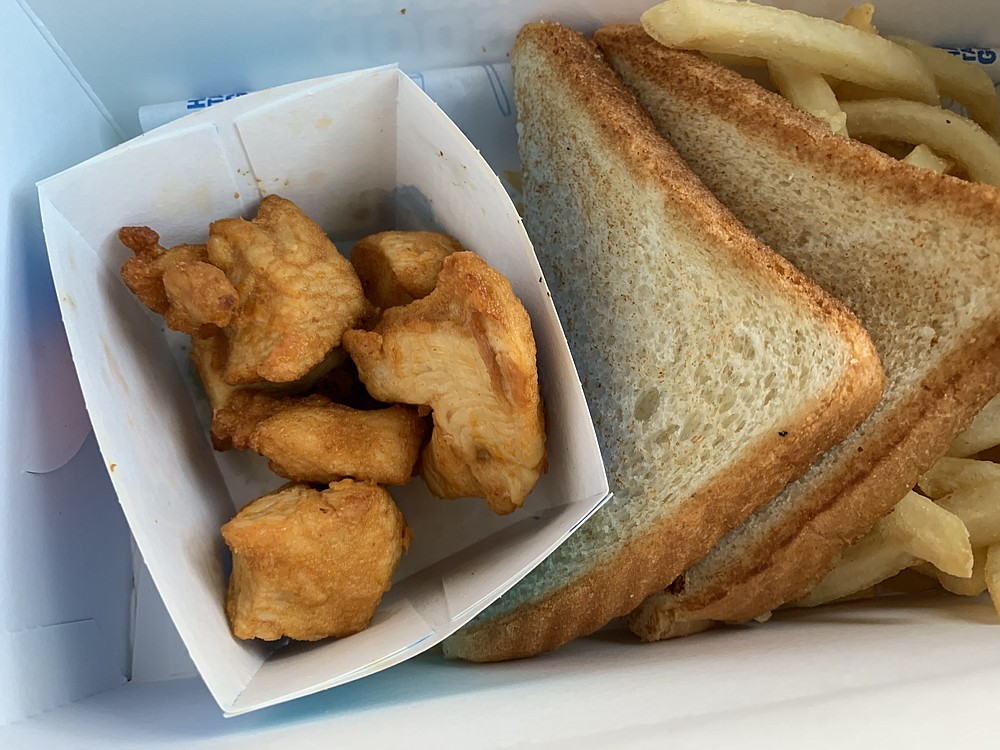 WHAT IT IS: Six chunks of grilled chicken breast come lightly coated with a very mild sauce or spice mix, with two half-slices of bread and a pile of fries.

HOW GOOD IS IT? The chicken bites were unimpressive, but at least they were real chicken and weren't fried. In fact, putting these chicken pieces in Zaxby's General Tso's sauce instead of their "boneless wings" would have been a real winning combination.