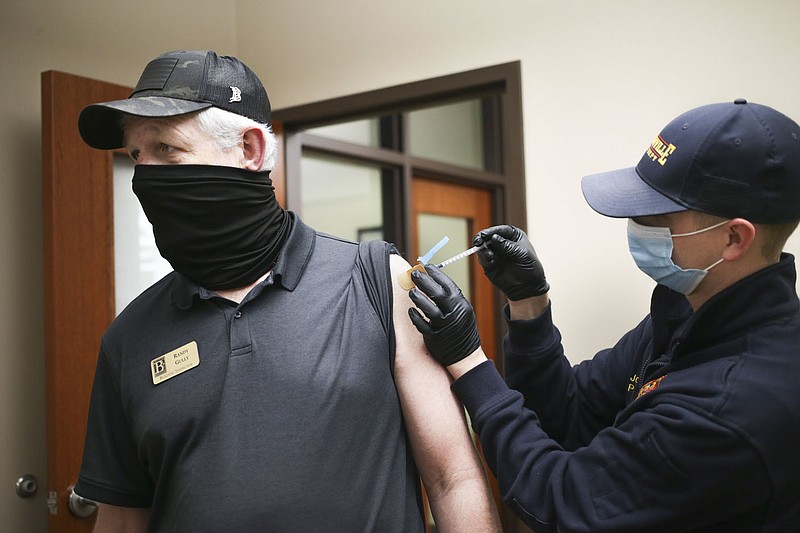 Northwest Arkansas residents are continuing to get vaccinated against covid-19 as several groups became eligible for vaccines this week.

Benton and Washington counties had 33,954 residents fully vaccinated against covid-19 as of Thursday, while another 64,921 had received the first of two doses, according to the Arkansas Department of Health.

The two counties have a combined population of 384,234 residents 16 and older, so about 8.8% of that group have been fully vaccinated while about 16.9% are halfway there.

Pfizer and Moderna vaccines require two doses. The federal government approved Johnson & Johnson's Janssen vaccine about two weeks ago and it requires only one dose. The Janssen is about 66% effective against covid-19 compared to Pfizer's 95% effectiveness and Moderna's 94% effectiveness, according to the federal Centers for Disease Control and Prevention.

Gov. Asa Hutchinson announced Monday anyone in the state's Phase 1-B can get vaccinated, opening up eligibility to groups such as people who work in grocery stores, general merchandise stores, manufacturing and government.

Bentonville facilitated vaccinations for 150 city employees Friday, according to Debbie Griffin, spokeswoman for the city. First responders have already had opportunities to be vaccinated.

About 816,380 doses had been given in Arkansas as of Friday, according to the state Health Department. The data includes first and second doses.

Demand for appointments has been steady, according to Jennifer Cook, spokeswoman for Mercy. Mercy had given 13,742 vaccine doses as of Thursday, she said.

Washington Regional Medical System had given 17,030 doses, including 11,302 first doses and 5,728 second doses, through the end of the day Thursday, according to Natalie Hardin, spokeswoman.

Northwest Health System will host a drive-through appointment-only vaccination event 8 a.m. to noon Wednesday at its Willow Creek Women's Hospital in Johnson. The event is for anyone in Phase 1-B.

School districts in the region began vaccinating employees about seven weeks ago. It's unclear exactly how many school employees have been vaccinated because, while some districts have hosted mass vaccination events to vaccinate staff efficiently, local pharmacies also allowed school staff to make appointments on their own. Schools generally have not tracked how many employees got vaccinations on their own instead of through the districts.

Fayetteville School District has about 85% of its estimated 1,460 employees fully vaccinated, according to Alan Wilbourn, spokesman.

The Springdale School District has at least 1,963 employees who have received a vaccine, according to Trent Jones, spokesman for the district. The district employs 2,952 people.

A survey by Rogers School District showed 939 employees are fully vaccinated while another 112 are partially vaccinated. Another 95 employees indicated they plan to get a vaccine, while 156 indicated they will not get vaccinated, according to information from Ashley Siwiec, spokeswoman for the district. The district has 2,063 employees, 761 of whom either did not respond to the survey or had another response.

Bentonville School District planned to have 1,217 employees fully vaccinated by the end of the day Friday with 69 employees awaiting their second doses, according to Janet Schwanhausser, deputy superintendent. The district employs 2,364 people.

The Bentonville district had 32 active cases as of Thursday, according to the Health Department. Rogers had 21 active cases, and Springdale had 27. Fayetteville had fewer than five active cases. The University of Arkansas had 42 active cases. Active cases are those that have not recovered or died.

Northwest Arkansas had about 487 new cases within the past week, including 250 in Benton County and 237 in Washington County, according to Danyelle McNeill, spokeswoman for the Arkansas Department of Health.

Hospitals in Northwest Arkansas had a total of 24 patients in their covid-19 units as of Thursday, according to a joint statement from the region's largest health care organizations via Martine Pollard, spokeswoman for Mercy Health System. The record for most hospitalizations in the region on a single day was 140 patients Jan. 8. 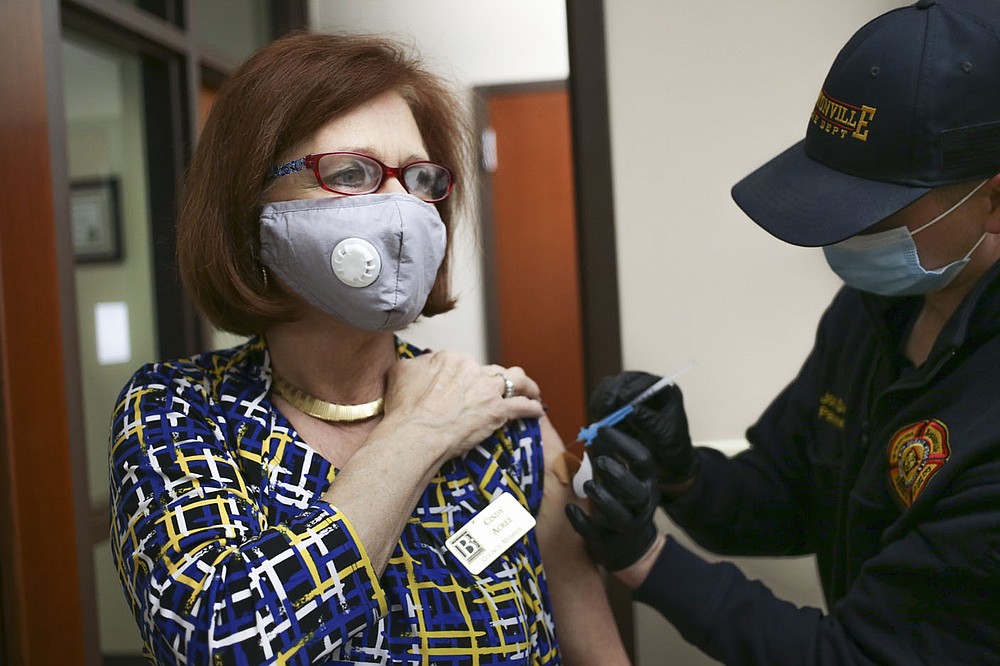 Covid-19 vaccines are available at the following places in Northwest Arkansas: