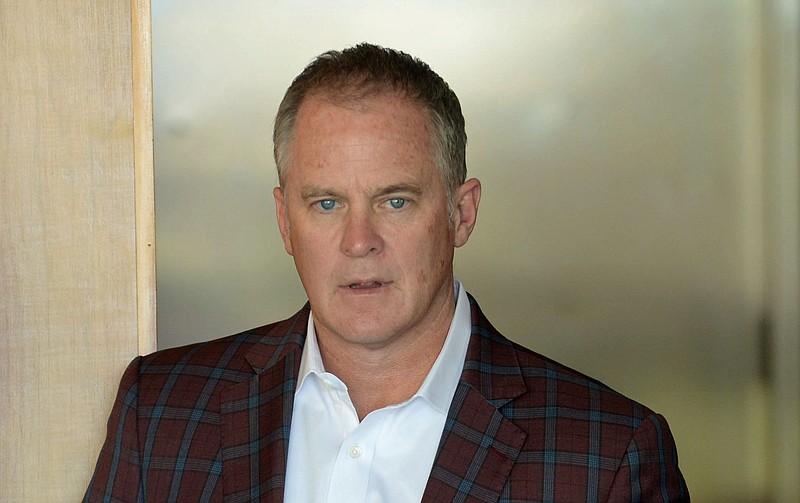 Hunter Yurachek, director of athletics at the University of Arkansas, is shown in this file photo.

A bill that would allow student athletes at colleges and universities in Arkansas to profit from their names, images and likenesses was recommended to the Arkansas House by its education committee Tuesday.

House Bill 1671 by House Speaker Matthew Shepherd, R-El Dorado, comes amid a national movement about college athletes' rights to contract with advertisers and be compensated for uses of their names, images and likenesses. Six states have already enacted laws allowing them to do so, Shepherd said.

Shepherd said proponents of athletes' rights to do so had been waiting for a federal solution, but one hasn't emerged. So states have taken up the matter themselves, leading to a changing recruiting landscape, he said.

"States are moving very quickly in this area, and quite honestly it becomes a matter of competitiveness for our institutions of higher education," Shepherd said.

Students might choose to go to schools where they can monetize their images rather than to institutions in Arkansas, hurting the Natural State's recruiting prospects, proponents of the bill said.

Opportunities for student athletes could include advertisements for restaurants or car dealerships in their hometowns, or being compensated for their likenesses being used in a video game.

They'd be prohibited from advertising pharmaceutical products, tobacco and weapons, among other things.

The legislation does not give third parties the right to use the names or mascots of the schools.

The bill includes both two-year and four-year institutions.

The states that have enacted similar legislation are Florida, Colorado, Nebraska, Michigan, New Jersey and California.

Twenty-three states have introduced this type of legislation during their current legislative sessions, Shepherd said.

If passed by the Arkansas Legislature, then the bill would go into effect on Jan. 1. It would not allow athletes to be compensated by the universities for their playing sports or for their performance.

Athletes would be allowed to hire third-party advisers to help them navigate contracts.

Hunter Yurachek, athletic director at UA-Fayetteville, said legislation like HB1671 hasn't happened yet in Arkansas because of concerns about cheating -- for instance, a local business offering an advertising deal to coerce a student to go to a certain school.

"I'm not sure we'll ever figure out how to legislate basic human integrity in college athletics," Yurachek said.

He said not every student would take advantage of the opportunity to be compensated, but it would be a factor that "could dynamically affect the recruiting."

"There's a word called trust on our football team," Pittman, who testified in support of the bill, responded. "I'm not about to lose the trust of my football team for one guy."

Pittman said the legislation would affect a small percentage of athletes, but that not having it puts Arkansas at a regional recruiting disadvantage.

The bill now heads to the full House for further consideration.