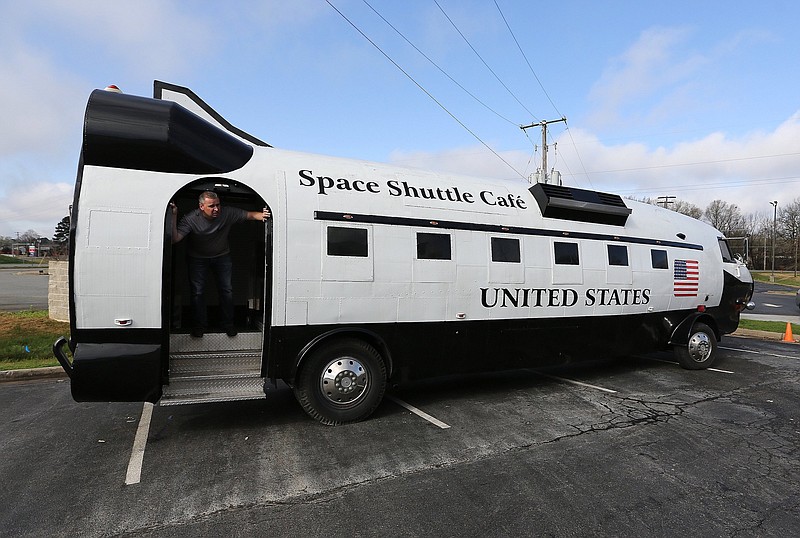 Chris Bailey, senior vice president of operations for Minute Man restaurants, exits the Space Shuttle Cafe food truck, which arrived last week at the Minute Man in Jacksonville. CEO Perry Smith says the 39-plus-foot mobile restaurant is in the "hangar," needing an engine rehab, along with work on the interior and the removal of a couple of dents that occurred in transit. (Arkansas Democrat-Gazette/Thomas Metthe)

If you motored on down Friday to West Fourth Street and Broadway in Little Rock for the debut of the Minute Man Space Shuttle Cafe, you would have found the original Minute Man mobile unit vending burgers there, as it does frequently, but no Shuttle. CEO Perry Smith explains that, "being extra diligent in terms of safety," the newly acquired mobile unit is in "maintenance hangar" for "a work-over and engine upgrade," possibly requiring a whole new engine. You will recall that Smith had the mobile cafe, 39 feet long, 8 feet wide and 11 feet tall, trucked down with considerable difficulty from New York last week. He anticipates it'll "launch" soon; meanwhile, he reports that the work on a second mobile unit, more along the lines of the first one, has recently been completed, meaning "we will have a better window to put it into service as the shuttle is being updated." Visit minutemanburgers.com.

We've had a couple of queries about the former IHOP at 11501 Maumelle Blvd., North Little Rock, where readers have spotted mobile storage containers out front and workers on site, though the "for lease" sign remains up. The North Little Rock Planning Commission reports that as of last week, it has not issued a building permit for that address. We'll update you as we can.

OrthoArkansas' Ortho Eat and Go, in which food trucks park every second and fourth Thursday on the south lot at 800 Fair Park Blvd., Little Rock, isn't operating today because of spring break, says an OrthoArkansas spokeswoman, who adds that the trucks should be back on schedule — and the lot — next week. The three "debut" trucks on the lot that first day — Shobo's Kitchen, Cheesecake on Point and Crepe Coop — all sold out of food, says the spokeswoman, and their owners are anxious to return. Keep track of the schedule and which trucks will be vending when at orthoarkansas.com/eat-and-go.

April 4 is Easter, and though there won't be quite the usual plethora of special brunches, etc., because of the pandemic, there will still be opportunities for those who feel secure enough to dine-in while dining out. Among them: Allsopp & Chapple Restaurant + Bar, 311 Main St., Little Rock, which is offering an "Easter Sunday 4-Course Dinner Event," 11 a.m.-3 p.m. Courses include soup (wild mushroom) or salad, appetizer (shrimp scampi or petite prime beef carpaccio), entree (grilled mahi-mahi or crispy organic half chicken) and dessert. Cost is $69 including "complimentary sangria." See the full menu at facebook.com/AllsoppAndChapple; make reservations by calling (501) 902-4911 or visit tinyurl.com/443zdj9k.

One of our eagle-eyed readers reports that a casualty of the renovation of the Walmart Supercenter, 19301 Cantrell Road at Chenal Parkway, Little Rock, is the McDonald's restaurant inside. Various news outlets reported in June that the chain was planning to close 200 of its 14,000 U.S. locations last year, half of which would be "low-volume restaurants" in Walmart stores. Our reader reports employee speculation puts either a Taco Bell or a Subway in its place. 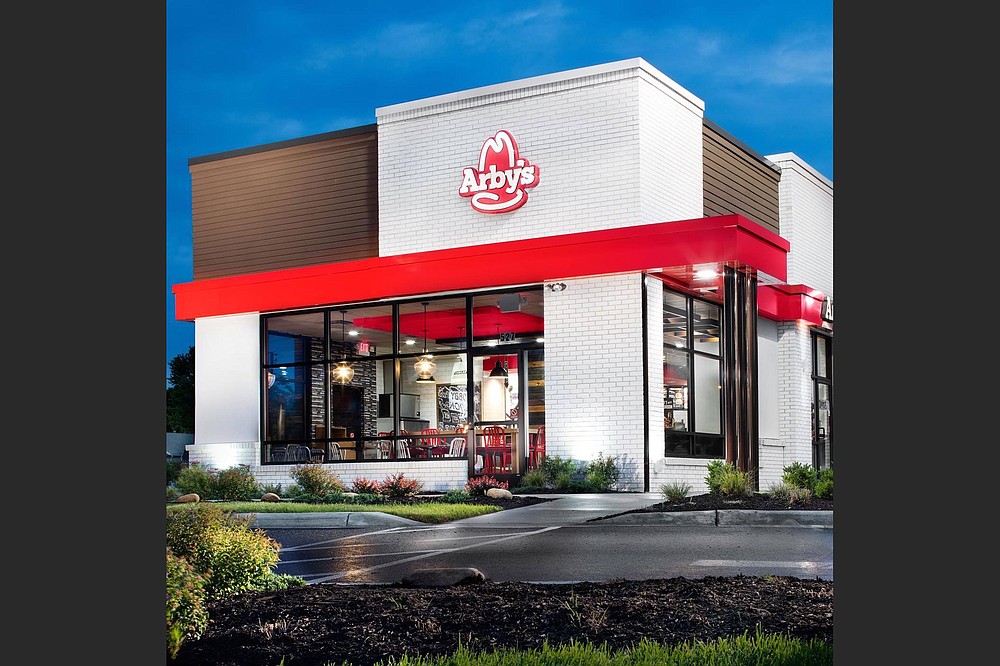 Here's what Arby's customers in Clarksville, Fort Smith, Greenwood, Russellville and Van Buren can expect their restaurants to look like after the franchisee completes extensive renovations. (Special to the Democrat-Gazette)

Tulsa-based Flynn Restaurant Group LLC, the country's largest Arby's franchisee, is "revitalizing" 10 Arby's locations across Arkansas, including restaurants in Clarksville, Fort Smith, Greenwood, Russellville and Van Buren, plus Poteau, Roland and Sallisaw, Okla. Renovations are expected to take a few weeks per restaurant — drive-thrus will remain open throughout with special "Buy One, Get One Free Classic Roast Beef Sandwiches" construction deals — and to be complete by the end of 2021. It's costing Flynn $3.5 million dollars. Similar "revitalizations" have already taken place at Arby's outlets in Central Arkansas.

And through Wednesday, Panera Bread is teaming up with chef Jose Andres and his World Central Kitchen to combat hunger. Panera will donate $1 to World Central Kitchen from the sale of each sandwich it sells. (Small print: "Breakfast sandwiches, half sandwiches, catering orders and orders made on third party sites are excluded.") They're also introducing a short film, "Hunger Interrupted," documenting Andres' efforts to fight world hunger. You will recall the collaboration last year between Andres' World Central Kitchen, the Clinton Foundation and several other area nonprofits on a Little Rock "grab-and-go" meal program in the wake of covid-19 school closures. Visit tinyurl.com/9a4p5234.

CORRECTION: Easter Sunday is April 4. An earlier version of this article placed it incorrectly.