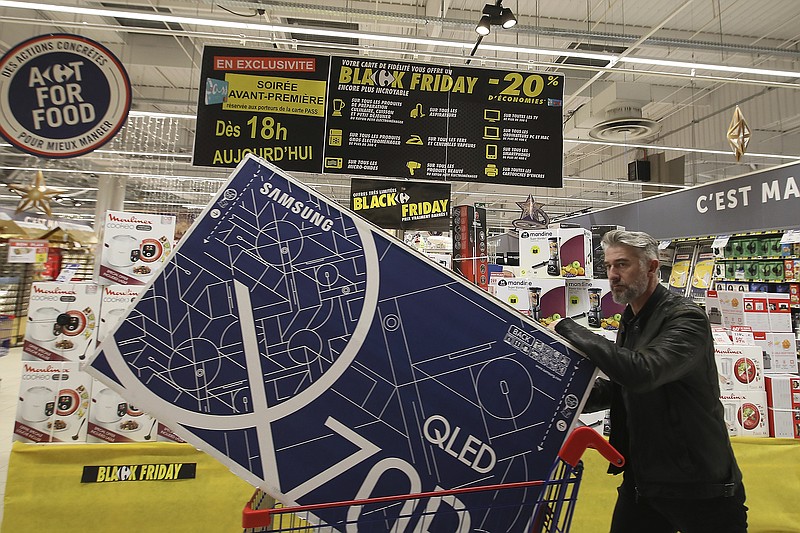 A customer shops in a Carrefour Shopping center in Cesson, France, in this file photo. Carrefour said Wednesday that it will buy Walmart’s stores in Brazil, leaving Walmart owning only a small share of Carrefour Brazil. (AP)

Walmart Inc. is retreating further from Brazil's grocery market with the sale of most of its stake there to French supermarket chain Carrefour.

Walmart and private equity firm Advent International, which had an 80% stake in the company known as Grupo BIG Brasil, will jointly retain a 5.6% interest in Carrefour Brazil, a Walmart spokesman said Wednesday.

Also, Grupo BIG operates under several banners, the spokesman said. One of these is Sam's Club, which Carrefour will continue to run under a license agreement with Walmart, he said.

Grupo BIG Brasil was formed in 2018 when Walmart Brazil sold the majority share of its operations to Advent International. Walmart retained the remaining 20% in the business.

The companies did not disclose the sale price, but the transaction values Grupo BIG at about $1.26 billion.

Paris-based Carrefour, which already had a presence in Brazil, said in a news release Wednesday that the acquisition will strengthen its presence in what it sees as a market with high growth potential.

Alexandre Bompard, chairman and chief executive officer of parent company Carrefour Group, said in the release that the company "is on the offensive."

"The acquisition of the BIG Group is a major transformational movement for Carrefour Brazil," Bompard said. "In this continental country with immense development prospects, we have accentuated our leadership in the food distribution market over the past three years, and BIG will further strengthen it with very complimentary formats and locations."

Carrefour said that with the acquisition of Grupo BIG, Carrefour Brazil will operate 876 stores and employ about 137,000 workers.

Dave Marcotte, senior vice president of retail insights for Kantar Consulting, said Walmart's main store format in Brazil is the hypermarket, similar to its Supercenters in the U.S.

But hypermarkets haven't been doing well there in recent years, Marcotte said, and too much of Grupo BIG's assets were in that format. Also, he said, Brazil is a very difficult country to do business in with a plethora of regulations and fees.

"I don't think [Walmart Brazil] ever had a profitable quarter, so selling it to Advent two years ago made sense," Marcotte said. "But they sold at a severe loss, as they did in Japan and the U.K.," he said referencing two previous sales.

Carrefour, however, has a long history in Brazil and a strong relationship with the government, Marcotte said. Still, "Carrefour hasn't been that successful in the rest of the world, so it was a big surprise to everyone" when it bought Grupo BIG, he said. "No one saw this coming."

Walmart's international strategy has shifted in recent years from growing its presence abroad to pulling out of underperforming markets. The company now focuses on those where it sees the most growth potential, such as Mexico, India and China.

The retailer announced in November that it was selling its business operations in Argentina to a South American retailer.

In February, Walmart said it had reached an agreement to sell most of its U.K. unit, Asda, to an investor group. That transaction is awaiting approval from Britain's regulatory authority.

More recently, Walmart said on March 1 that it had closed on the sale of 85% of its Japanese supermarket chain Seiyu GK. Walmart will retain the remaining 15%.