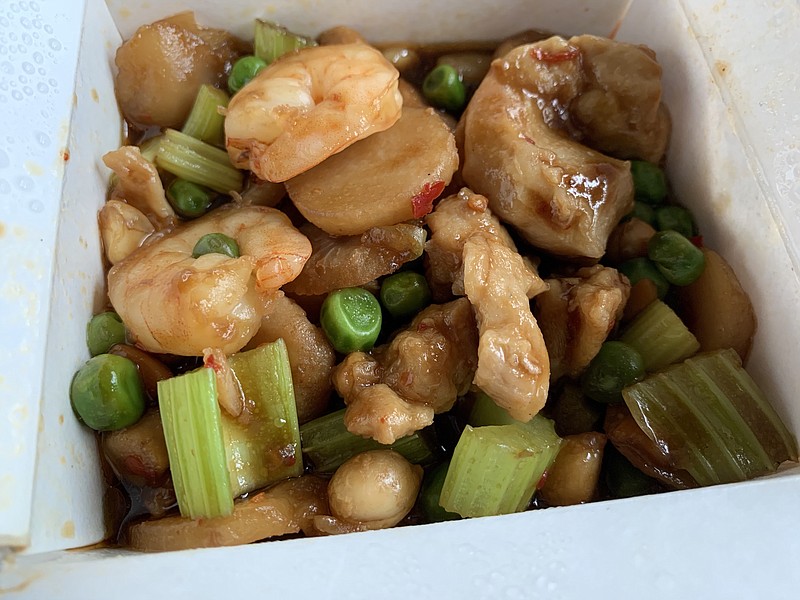 Eight Precious Wonders from Chinese Pavilion Hunan Restaurant in Sherwood featured sauteed chicken and shrimp with vegetables but was minus a couple of wonders — two kinds of mushrooms — promised on the menu. (Arkansas Democrat-Gazette/Eric E. Harrison)

We're still a week shy of the first anniversary of this column, born of necessity (and, to give our editor credit, genius) after the pandemic put the kibosh on full dine-in restaurant reviews. (We'll do a little more self-congratulation next week, but it's not easy coming up with these little introductions.)

This week we spread our attention across Chinese, Mexican and American cuisines, with varyingly enjoyable results. As has been our practice, we're still hitting up locally owned places, avoiding chains (especially national chains) and trying to stay within — with the occasional exception (see below) — a "hot on arrival" radius for our to-go dishes. Which, by the way, we fully pay for upfront.

The buffet currently isn't open at this venerable buffet restaurant — blame covid-19 — but it is serving off its menu for lunch and dinner six days a week (it is closed Monday), and it is doing to-go orders aplenty. (We must resist calling it the "Panda" — its logo features two pandas munching bamboo. Bamboo, as far as we can tell, is not on the menu, except maybe some dishes include bamboo shoots, which are edible and digestible by humans.)

This dish was missing at least two wonders — mushrooms and button mushrooms (the menu specifically differentiates) — which, we confess, were part of what attracted us in the first place to the dish, among the Chef's Specialties on what is a surprisingly extensive menu for what's normally a buffet place. That said, we enjoyed it, though not as much as we had expected to: plentiful chicken and not so plentiful small shrimp sauteed with veggies (peas, carrots, water chestnuts and lots and lots of celery — perhaps as filler for the missing mushrooms) and a redeeming number of small peanuts in a slightly spicy, rich brown sauce. The soup was a little spicier than it was sour, though not exceptionally so either way; it was full and rich and tasty, and we got a comparatively enormous portion for the price.

HOW IT WENT: Normally we would have considered this place — have considered it, actually — outside our ranging zone, but we happened to be in Sherwood on an errand and, after striking out on a Thai place of our acquaintance because it's now closed on the weekends, decided to take a chance. We placed our order over the counter and waited about 10 minutes for it to come out of the kitchen. Despite taking 20 minutes to get home, our entree — packed not in foam clamshell but in a "standard" Chinese to-go paperboard container — was piping hot, hotter than the soup, which was in a plastic pop-cover "bowl."

HOW IT'S GOING: There were two occupied tables when we entered, and a third one filled up while we waited; there was at least three to-go orders, presumably placed by phone, bagged up and handed over. 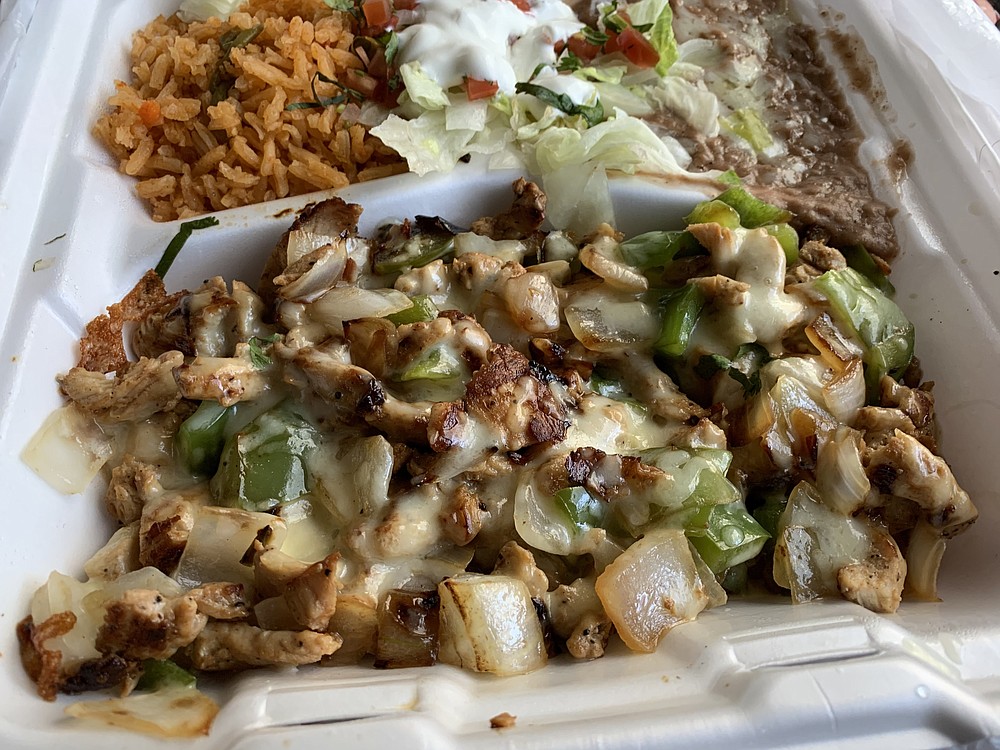 La Casa Real started out in west Little Rock's Market Place Shopping Center, and moved a few years back into the space near the crest (at G Avenue) of North Little Rock's Park Hill that for a long time had been Paul's. The name, of course, has nothing to do with "realism" — "real" in Spanish is "royal." It serves the "middle" level of Mexican food — authentic as far as it goes, but with a slight edge toward American tastes. (Street tacos, for example, are labeled on the menu as Street Tacos, but they're only $2 apiece a la carte.)

Right now, La Casa's kitchen isn't doing Pollo con Mole ($14), which was our first choice, so we redirected our attention to the Alambre al Queso, another of the chef's specialties, which we have enjoyed at other Mexican restaurants: grilled chicken (beef sirloin is also an option), bell peppers and onions, all glued together with melted cheese. At first bite, the chicken seemed a little overspiced, but it quickly grew on us — maybe it was just that first bite. The dish comes with fairly vivid orange Mexican rice and not-so-vivid (actually rather boring), soupy refried beans, plus a small salad topped with a dollop of sour cream.

HOW IT WENT: The restaurant closed for a few months at the heart of the pandemic but reopened late last year, for lunch/dinner to-go and curbside delivery only. We ordered and paid over the counter after the hostess located a menu, then retreated to our car for an eventual curbside hand-over. It took about 12 minutes for our order to come out.

HOW IT'S GOING: Ours was the only order, mid-afternoon on a weekend. The restaurant is closed on Sundays. 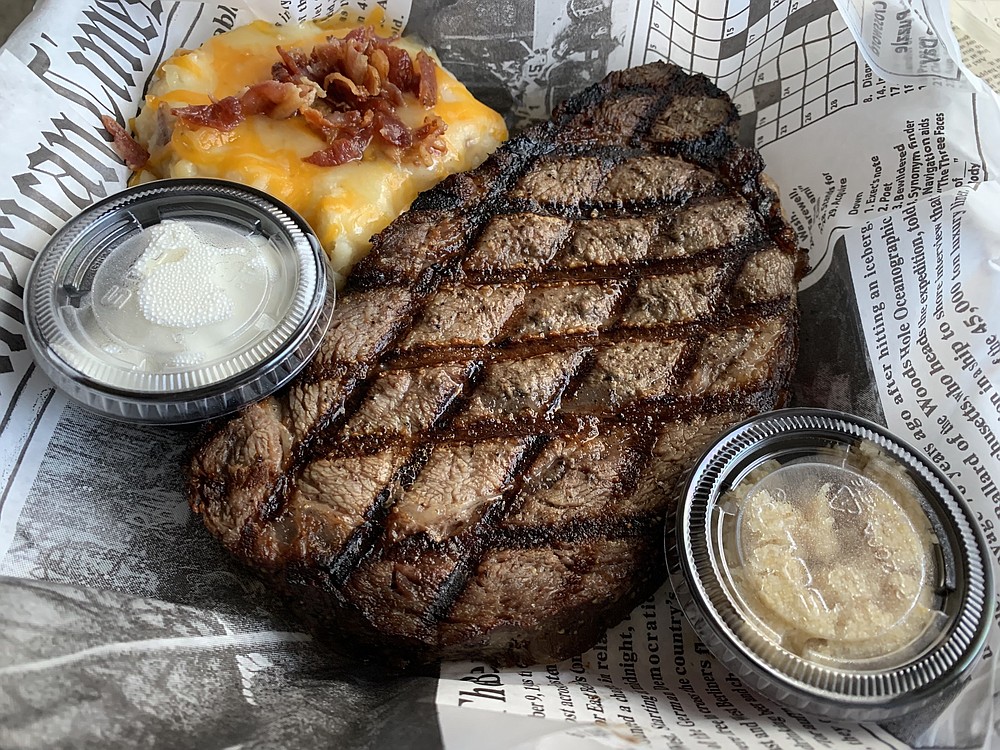 Shorty Small's grills, rather than roasts, its 15-ounce prime rib, and serves it (to go) with cheese-and-bacon-topped mashed potatoes and a side salad, plus cups of horseradish and sour cream. (Arkansas Democrat-Gazette/Eric E. Harrison)

Shorty's, a venerable west Little Rock establishment that was the progenitor of a now-shrunken mini-chain and has had several makeovers over the years, has shut down a couple of times during the pandemic, most recently for a couple of months, reopening about the same time the governor announced that restaurants could now open at 100% capacity.

Maybe Shorty's menu has always offered a 15-ounce prime rib and we never noticed, but we've noticed now. Prime rib is supposed to be roasted, but Shorty's grills it (the grill marks are plain), which explains why it's labeled as a "steak dinner" and not just plain "prime rib." (Doesn't that make this a ribeye? Not quite. That's another day's discussion.)

We opened our foam clamshell to discover a huge slab of meat, not exactly medium rare, though that's how we ordered it, but a little rarer than "medium well," which is the done-ness starting point on the online order form. The meat was well marbled, which means there was fat along the edges and some fatty pockets — that's part and parcel of prime rib — and near-perfectly seasoned, though some edge areas were a little peppery. In the same clamshell: a pile of "loaded" mashed potatoes (topped with melted cheese and good-sized chunks of bacon), a cup of sour cream and a generous portion of mild horseradish (not, as the menu described, "horseradish sauce," though we suppose we could have achieved that by mixing the horseradish with the sour cream). A slightly limp side salad of mixed greens, onions and grated cheese with our dressing choice (raspberry vinaigrette) in a plastic cup, came in a smaller side clamshell. Missing/not missed: the green beans the menu promised. Perhaps we'd have had them if we were dining in. All in all, though, we'd say we got our money's worth.

HOW IT WENT: Our first attempt at a Shorty's to-go order didn't pan out. Despite signs and wind-blown flags proclaiming that the restaurant was "OPEN," it was closed at 5 p.m. on a recent weeknight with a sign on the door that it had shut down early because of a staff shortage. So a week or so later we dug around and found Shorty's online order system, placed our order online for later that afternoon, paid for it online and picked it up in the bar (drive-thru window service is available if you prefer less contact). It was ready on time.

HOW IT'S GOING: There were a few occupied tables in the restaurant late in a weekend afternoon, before the usual dinner hour. We didn't see any other to-go orders but there may have been some.