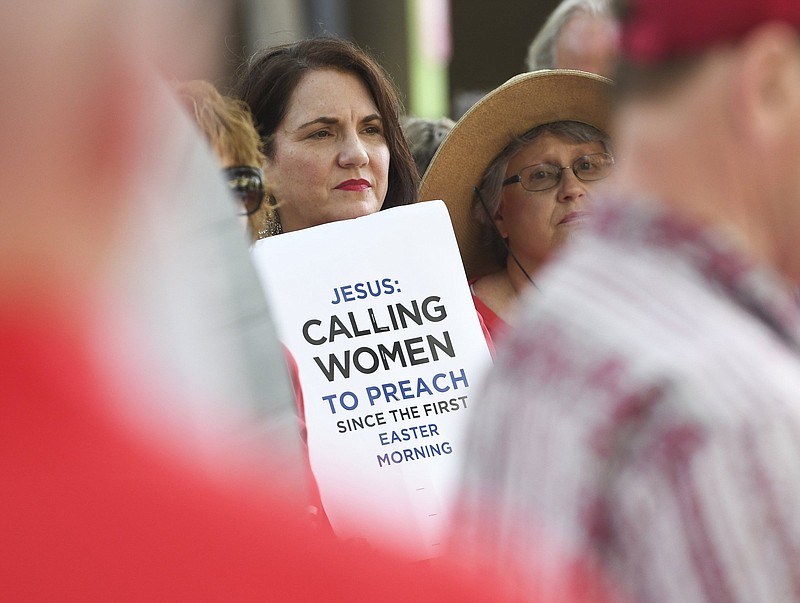 Janene Cates Putman of Athens, Tenn., holds a sign during a demonstration outside the Southern Baptist Convention’s annual meeting in Birmingham, Ala. Among the millions of women belonging to churches of the Southern Baptist Convention, many question the faith’s gender-role doctrine and urge a stronger response to disclosures of sexual abuse perpetrated by the denomination’s clergy. (AP/Julie Bennett)

Yet the 39-year-old Oklahoma woman now finds herself wondering if it's time to leave the nation's largest Protestant denomination, in part because of practices and attitudes that limit women's roles.

"Every day I ask that," Snook said. "I don't know what the right answer is."

She's not alone. Among the millions of women belonging to churches of the Southern Baptist Convention, many question the faith's gender-role doctrine and urge a stronger response to disclosures of sexual abuse perpetrated by the denomination's clergy.

For many women affiliated with the faith, even those committed to staying, the topic of gender became more volatile this month when popular Bible teacher Beth Moore said she no longer considered herself Southern Baptist. Moore, perhaps the best-known evangelical woman in the world, had drawn the ire of some of the convention's conservatives for speaking out against then-candidate Donald Trump in 2016 and suggesting the denomination had problems with sexism.

Karen Swallow Prior, a professor of English and Christianity and Culture at Southeastern Baptist Theological Seminary, belonged to one of the megachurches and wrote a passionate article in February explaining why she remains Southern Baptist.

Yet she is among a number of women in the faith publicly sharing their dismay about sex abuse and the vitriol directed at Moore.

"Beth has been scorned, mocked, and slandered while doing exactly what the denomination has determined she could and should do: be a woman teaching other women," Prior said via email.

"I cannot count the number of women who have reached out to me over the past few years, lamenting and grieving the way women have been and are being treated in some [Southern Baptist] churches and by some denominational leaders," Prior added. "If these women leave, it won't be because Beth left. It will be because the men the Baptist Faith and Message says are supposed to lead in Christ-like ways have failed to do so."

Prior was referring to the doctrine the convention adopted in 2000 which espouses male leadership in the home and the church and says a wife "is to submit herself graciously to the servant leadership of her husband." It specifies that women cannot be pastors, citing the Apostle Paul's biblical admonition, "I do not allow a woman to teach or to have authority over a man; instead, she is to remain quiet."

Snook, who lives in Norman, Okla., said she grew up being taught that men were leaders in the church and the home "to protect women, to lift them up."

"Is it about protecting women -- or is it really about protecting your power and covering up sexual abuse in the church?" she asked. "That's caused a crisis of faith among a lot of women and men."

Snook gained some attention -- and criticism -- in Southern Baptist circles when she posted an article in January on a blog called SBC Voices describing how she found herself admiring Vice President Kamala Harris despite her support for abortion rights. Now, Snook and others in her circle are pondering whether they have a future in the denomination.

"Do we stay and work for what we're supposed be?" she asked. "If we all leave, are we abandoning our responsibility?"

Under certain circumstances, women can make professional strides in the Southern Baptist world -- teaching at seminaries, working at the faith's missionary organizations or, like Moore, carving out a niche as Bible teachers for a female clientele.

At First Baptist Dallas, the outspoken conservative pastor, Robert Jeffress, has encouraged daughter Julia Jeffress Sadler to be active in ministry, even though he cautioned her at age 11 that she couldn't hold the title of pastor.

"He explained to me, Julia, you can't be a head pastor for the same reason I can't have babies. That's not God's design," Sadler said.

Sadler, 33, directs a program at her father's megachurch called Next Generation that develops ministries for teenagers, college students, single young adults and young mothers. She says there are about 1,500 participants, with a 60%-40% female-male split.

"A lot of times we focus on the one thing that the Bible says women aren't supposed to do, which is be the head pastor, instead of looking at all the things we can do," she said. "We're going to miss out in churches, miss out in ministries, miss out in Christianity as a whole, whenever we take women out of the equation."

Sadler said her husband, Ryan, who oversees some of the church's education programs, "understands that women are called to ministry, and that some of us really hate cooking. We have other things we'd like to do."

Denise McClain Massey, who earned three graduate degrees from Southern Baptist Theological Seminary, left the denomination after it formalized the no-female-pastors rule in 2000 and is now a professor of pastoral care and counseling at Mercer University School of Theology.

There are "painful, disorienting double-messages for women in the [Southern Baptist Convention]," she said. "You're created in the image of God, but if you experience God leading you to be pastor, you get told there are limits to what you can do -- sit down, go home, be quiet. There's kind of a crisis where women feel shut down and dismissed and attacked."

Christa Brown, a Colorado-based author and retired lawyer who attended Southern Baptist churches from infancy until college and says she was sexually assaulted by a youth pastor as a teenager, has long been an outspoken critic of the faith's response to revelations of sex abuse by clergy.

Brown sees a link between the abuse and the doctrine that women should submit to male leadership.

"It sets up interpersonal and institutional dynamics that help to foster abuse and cover-ups," she said. "The [Southern Baptist Convention]'s pervasive misogyny inculcates attitudes that, at best, are limiting of female potential, and at worst, are disrespectful and dehumanizing."

She expects most Southern Baptist women will stay loyal to their churches but hopes others will "stop graciously submitting and start graciously walking."

In some cases, entire congregations have walked away. Joel Bowman, pastor at Temple of Faith Baptist Church in Louisville, Ky., recently abandoned plans to move the congregation into the Southern Baptist fold. Bowman, who is Black, had differences with Southern Baptist leaders on racism and also gender roles -- his wife, Nannette, is an associate minster at the church.

Towne View Baptist Church in Kennesaw, Ga., is being expelled by the denomination for accepting LGBT people into its congregation. Its pastor, Jim Conrad, also opposes its gender rules and is likely to affiliate with a Baptist denomination that allows female pastors.

"Tradition is fine," said Cheryl McCree, a deacon at Towne View. "But when it comes to faith, we follow Christ. ... We have to reach out to everybody." 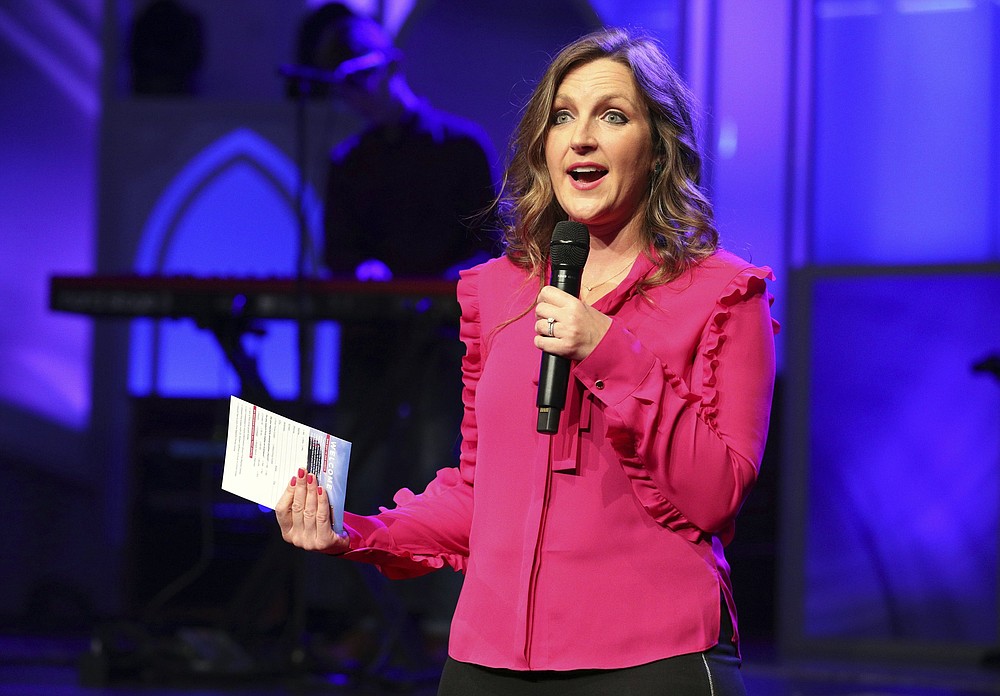 Julia Jeffress Sadler speaks during the contemporary service at First Baptist Dallas in Dallas on Sunday. The outspoken conservative pastor, Robert Jeffress, has encouraged his daughter, Sadler, to be active in ministry, even though he cautioned her at age 11 that she couldn’t hold the title of pastor. (AP/Richard W. Rodriguez) 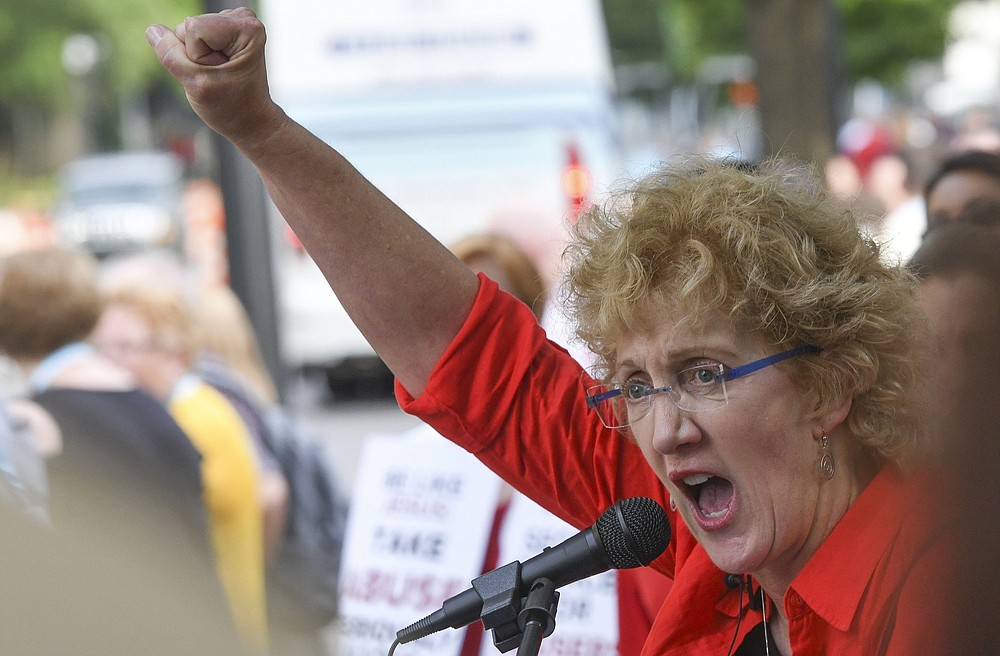 Christa Brown of Denver, speaks during a rally in Birmingham, Ala., outside the Southern Baptist Convention’s annual meeting on June 11, 2019. Brown, an author and retired lawyer, says she was abused by a Southern Baptist minister as a child. She has been pushing the denomination to create an independently run database listing pastors and other church personnel who have been credibly accused of abuse. (AP/Julie Bennett) 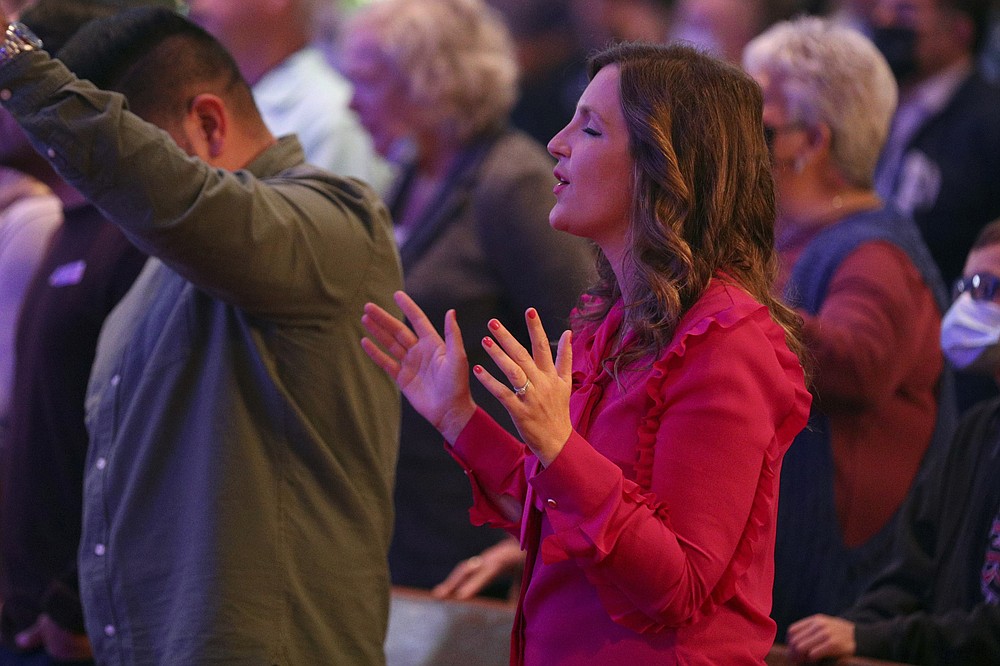 Julia Jeffress Sadler, director of a program called Next Generation which develops ministries for teens, college students, single young adults and young moms, participates in the contemporary service at First Baptist Dallas in Dallas on Sunday, March 21, 2021. The program is held at the megachurch of her father, the outspoken conservative pastor, Robert Jeffress. “A lot of times we focus on the one thing that the Bible says women aren’t supposed to do, which is be the head pastor, instead of looking at all the things we can do,” she said. (AP Photo/Richard W. Rodriguez) 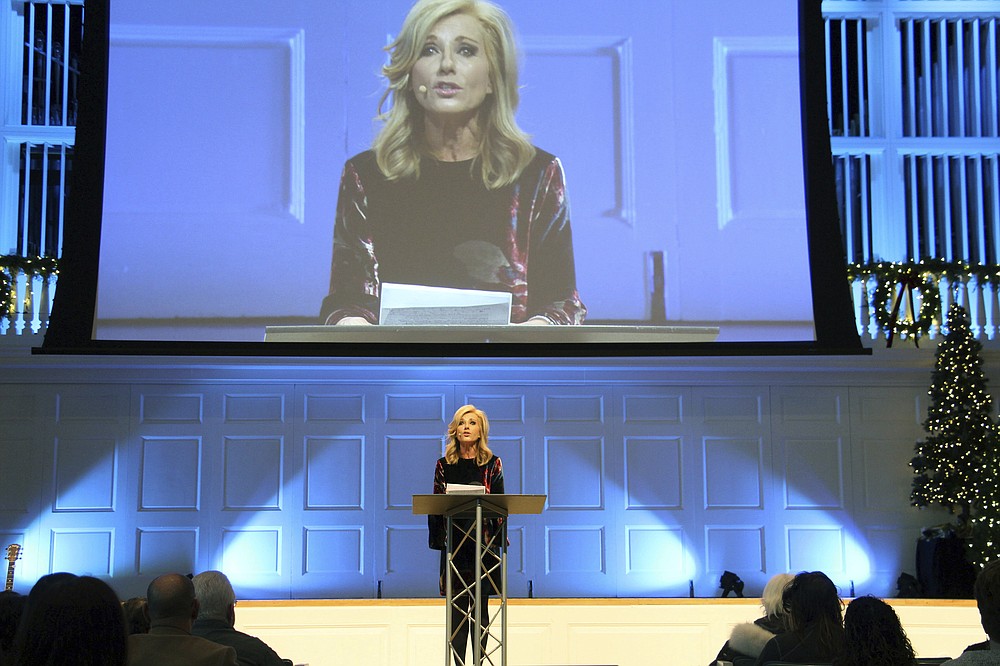 FILE - In this Thursday, Dec. 13, 2018 file photo, Beth Moore addresses a summit on sexual abuse and misconduct at Wheaton College in Wheaton, Ill. A Bible study teacher, Moore has been beloved among Southern Baptists for years, packing out stadiums and selling millions of books. But when she began to criticize Trump and call out sexism, racism, and abuse in the church, she became a pariah. In 2021, Moore left the nation's largest Protestant denomination, saying she can no longer identify as Southern Baptist. (Emily McFarlan Miller/Religion News Service via AP)
ADVERTISEMENT