A PANDEMIC STRIKES: Black churches go above, beyond 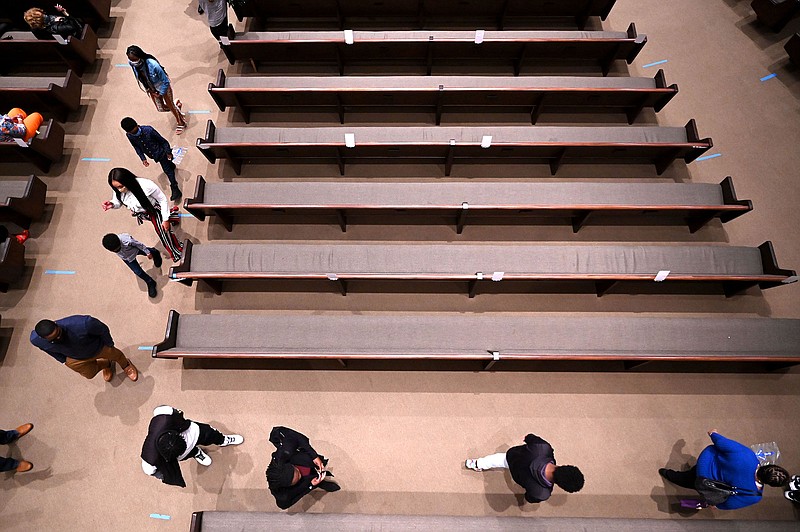 Socially distanced congregants leave the sanctuary at Second Baptist Church in Little Rock one section at a time at the end of the service on March 21. The procedure is one of several that have been put in place since the start of the pandemic. More photos at arkansasonline.com/328church/ (Arkansas Democrat-Gazette/Stephen Swofford)

As the Black community suffered from the covid-19 pandemic, so too did its churches.

Over the past year, the churches have become more than places of worship -- they have educated people about the disease and how to survive it, and encouraged trust in the medical profession.

Covid-19 has affected people of color at a rate higher than it has whites, according to information collected by the Covid Tracking Project.

As of Friday, 51,600 Black people in Arkansas have contracted covid-19 and 832 of them have died, according to the state Department of Health. Blacks make up about 15% of the state's population.

[Interactive map not showing up above? Click here » arkansasonline.com/casesbyrace/]

The U.S. Centers for Disease Control and Prevention in an article published in July said long-standing systemic health and social inequities put many people in racial and ethnic minority groups at increased risk of getting sick and dying from covid-19.

Keneshia Bryant-Moore, assistant dean for diversity, equity and inclusion at the University of Arkansas for Medical Sciences and associate professor for health behavior and health education, said her department has been concerned about inconsistent and inaccurate information about the pandemic been spreading in the Black community.

"There is a lot of concern around the vaccine because of things that happened in the past, for example, the Tuskegee Study," she said.

The "Tuskegee Study of Untreated Syphilis in the Negro Male" was an experiment conducted by the Public Health Service and the Tuskegee Institute starting in 1932. The goal of the decades-long study was to "observe the natural history of untreated syphilis" in Black populations, but the test subjects weren't informed about the true nature of the study. Researchers told 600 Black men that they were being treated for "bad blood" when, in fact, they received no treatment at all.

"Trust is the foundation of everything, and the minority community's trust has been violated for centuries," Bryant-Moore said.

Bryant-Moore said she has been working with churches to create a bridge between the medical field and the Black community.

"The faith community in the African American community is one of the most trusted," she said. "You can't build trust overnight, especially during the pandemic, but we have been working on this before the pandemic."

"The church gives hope and inspiration, and without it, many members are being affected by depression, which is a result of people losing hope and, of course, many have lost loved ones as well," he said. "You use the church to get that word of hope when you experience grief and death."

Kelly said the pandemic has affected his congregation in many ways.

"One of our main ministry personnel has been in the ICU as we speak," he said. "We have encountered several deaths in our congregation and have had family members of the congregation pass. ... We have been hit very hard by the pandemic."

"I have done several funerals and preached at the eulogies of church members and their family members," he said. "I have gotten to the point where I just don't want to hear about any more deaths."

Pastor Tony Byers of First Missionary Baptist Church in Little Rock said in an email that "the pandemic has created a wave effect within the African-American church. It has caused individuals to become more creative in getting the gospel out. Whereas in some cases it has created a wave of fear. Indeed, many are afraid of certain things and the fear of the unknown is at the top of the list."

Bryant-Moore said that since the days of slavery, African Americans have looked to the Christian faith for inspiration in dark times.

"The Book of Exodus was about a group of people escaping slavery, and the Bible since then has always been a way to look for something brighter in our future," she said. "If you look at our history, some of our most prominent leaders are connected to the church."

"The church is still the beacon of light," Byers said.

The pandemic has changed how churches function, with technology pushing to the forefront. The church has adapted to ensure the Gospel is reaching people who want and need it, Byers said.

Thirland McKissic, pastor of New Fellowship Baptist Church in Pine Bluff, said his congregation hasn't assembled during the pandemic to help keep the virus from spreading among members.

That has required the fairly small and youthful church to get innovative.

"We used freeconference.com at the state to get our message out," he said. "We have also done some ministry on Zoom, and on Sunday mornings, we go out at 9 a.m. on YouTube and do a message for about an hour, and then place it on Facebook.

"Then we put it on our website for our members who missed [it, so they] can go back and watch it."

McKissic said the church has been able to continue, but the fellowship is missed.

"Things have changed," he said. "We have to understand that God understands all of this. He gave us the science that tells us how to avoid being caught up with something that we can't see but [that] we know is out there."

McKissic said the pandemic will probably change the church forever.

"I think it's going to change the way we minister to people," he said "As long as you have these restrictions, we are going to have to figure out a new way to minister. We got so comfortable drawing people into the building instead of going out to the people."

The pastors said that despite the challenges, they have an obligation to carry on during the pandemic because the church is such an important part of the Black community.

Kelly said churches are not entirely about religious guidance. They also are places where Black congregants can learn about important social issues.

"I was watching a report on CNN that said the African American church, and the mega church for that matter, are the main sources of education in the community," Kelly said. "I think it's our responsibility to let [congregants] know [the vaccines are] safe. We are getting rid of myths like we are guinea pigs for the vaccine. We want them know they can trust science."

Kelly said the Black community's mistrust of the medical field stretches back generations.

"The systemic racism in one system can easily be interpreted into the other system," Kelly said. "You can see this in the lack of trust in science and health care, and the disparities in health care. It's hard to ask the Black community to trust a system that has mistreated them for years."

Bryant-Moore said she has heard a lot of misinformation about the pandemic and the vaccines.

"I have heard from people who believe the ones who are getting the vaccine on television are just taking a shot of sugar water," she said. "There are also others who believe there are tracking devices in the shots. People are basically scared. The sad thing is that I understand why they are scared because they are just looking at history."

Bryant-Moore said that early in her career, she worked with the faith community in cooperation with a health organization and knows the benefits of the two working together.

"What struck me was the need for a network to help offset some of the challenges of accessing health care across the state. Not every county or city has a hospital, but every place has an area of worship. I knew we could use those for education," she said.

Bryant-Moore said in 2016, UAMS was awarded money to create the Faith-Academic Initiatives for Transforming Health Network, a collaboration among it and churches.

The Arkansas FAITH Network delivers health programs and education to faith communities across the state.

"Through that network, we have been working with African American faith leaders, and we are now working with Marshallese and Hispanic faith leaders," she said. "Over the past decade, faith leaders have developed trust in us, and they will come to us as a source of information even if we are a part of UAMS."

During the past couple of months, the FAITH Network has held webinars at various churches, providing information about the vaccines and answering questions about covid-19.

Bryant-Moore said the organization used federal covid relief funds to hold a training seminar in December to teach faith leaders how to protect their congregations and themselves for the virus.

"Faith leaders who attended the training received a 'stop the spread' kit that included automated hand sanitizing machines, signage and masks to be distributed at their places of worship," she said.

Bryant-Moore said the FAITH Network is talking to pastors throughout the state about emphasizing the importance and safety of the vaccines for their congregations.

"Some faith leaders have told us they are willing to be a testimony by taking the vaccine themselves," she said. "We have talked to 20 pastors so far, and we will take back what they tell us."

"We are using our platform," Kelly said. "Last Sunday, we had a special infomercial about the safety of the vaccine, and [the speaker] gave her personal opinion about the science and how the vaccine will work."

Kelly said his church is also partnering with Baptist Health Systems and has called more than 200 of his members to ease their fears about the vaccine.

"We called each member over 70 years of age, and they are willing to take the vaccination," Kelly said. Before that, he said, many of them were afraid of the vaccines, and some of them didn't have access to them.

Also during the pandemic, Second Baptist Church has provided other help, such as financial assistance, gas giveaways and free meals.

"Many people are homeless and hungry, and we are trying to do everything that we can," Kelly said. "We are just following the mission of Christ. The love of Christ is not only for the congregation, but also the community. We have to go outside the four walls of the church and help people during this pandemic."

"Our Black community is beyond church attendance. We are in the community, as well," he said.