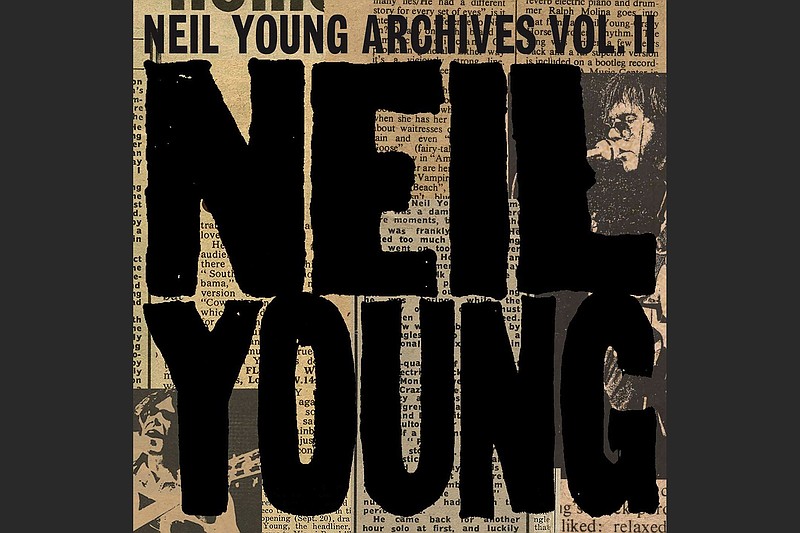 Most things happen with nobody sitting around taking notes.

At least it seems it was that way for most people, for most lives, before digital technology made it possible to record our lives as they happened and Facebook and Instagram converted us all into brands competing for attention that would be monetized by Big Tech. In the old days, ideas were lost for lack of a pencil or a napkin upon which to make a note. In the old days, sometimes you had to be there to catch the moment when the singer levitated and the guitar player spontaneously combusted.

But Neil Young probably always had a pencil and a tape recorder. And once he got access to them, he used recording studios the way some of us would like to use the Notes app on our phones. His habit of self-documentation goes way back.

People will tell you the first-ever boxed set retrospective of a popular recording artist's career was Bob Dylan's "Biograph," released in November 1985 and consisting of 53 tracks recorded over a 20-year period, beginning in 1961. Eighteen of the tracks had never been released, at least in official form. "Biograph" was savvy marketing — it was primarily aimed at hardcore Dylan fans, so it collected a lot of music they had heard about but couldn't acquire outside the bootleg trade. But Columbia also sought to create demand among upscale casual fans who might be interested in a one-stop solution for their Dylan needs. "Biograph" was both a kind of greatest-hits collection (nine of Dylan's dozen Top 40 hits to that point were included) and an attempt at musical biography.

Dylan's post-"Biograph" career has been rewarding, not the least because of the backward-looking, generally interesting "Bootleg" series of archival recordings that Columbia releases every year or so. "Biograph" is more important for what it did for the music industry than what it did for his career. It established the viability of the deluxe boxed set, complete with hits and rarities, as a marketing concept. Boxed sets have become a kind of classic rock cliché — status items that can't help but feel a little like coffins.

Still, "Biograph" was the first boxed set only because it was the first such project that came in a literal box. Neil Young did it first, in August 1977, with a three-record compilation album called "Decade" that was a self-conscious attempt to sum up his career to that point.

Before "Decade," which collected songs from Young's recordings with Buffalo Springfield in 1966 through his most recent solo album, the industry standard was to, once the repertoire had been amassed, release greatest-hits packages of an artist's more popular material. But Young wanted something different. He took part in selecting the tracks for "Decade," as well as writing sometimes compelling notes for each track.

(Take, for example, his note on "Ohio," the song about the shootings of students by members of the National Guard at Kent State University ... a song he'd written and recorded as a member of Crosby, Stills, Nash and Young: "It's still hard to believe I had to write this song. It's ironic that I capitalized on the death of these American students. My best [Crosby, Stills, Nash and Young] cut.")

The album kicked off with the previously unreleased Buffalo Springfield song "Down to the Wire," accompanied by Dr. John on piano, and included work Young had recorded with Crazy Horse and as part of Buffalo Springfield. There were live tracks ("Sugar Mountain," "The Needle and the Damage Done"); the expected big singles ("Heart of Gold," "Cinnamon Girl"); and a few curiosities: The version of "Long May You Run" on "Decade" features vocals from all four members of Crosby, Stills, Nash & Young, but it originally was released as part of the short-lived Stills-Young Band project, with Graham Nash and David Crosby's vocals stripped away.

And the version of "Like a Hurricane," recorded live in the studio, on the first pressing of "Decade" was a different mix than the version that was on Young's "American Stars 'N Bars" album, which had been released a few months earlier. The "Decade" version featured a slightly different (and probably the original live) vocal; but when it came time to produce CDs of the album, they went back to the "American Stars 'N Bars" version. So unless you have a first-generation vinyl record of the set, you can't hear the original "Decade" version — which I would hold to be the definitive version — of "Like a Hurricane" anywhere.

People who don't care about such esoteric details are probably not the target demographic for boxed sets. But the enduring commercial prospects for such products indicates that there are enough old hippies with disposable income out there to make mining the archives of prestige artists like Dylan and Young an ongoing enterprise.

Young has understood that for a long time. 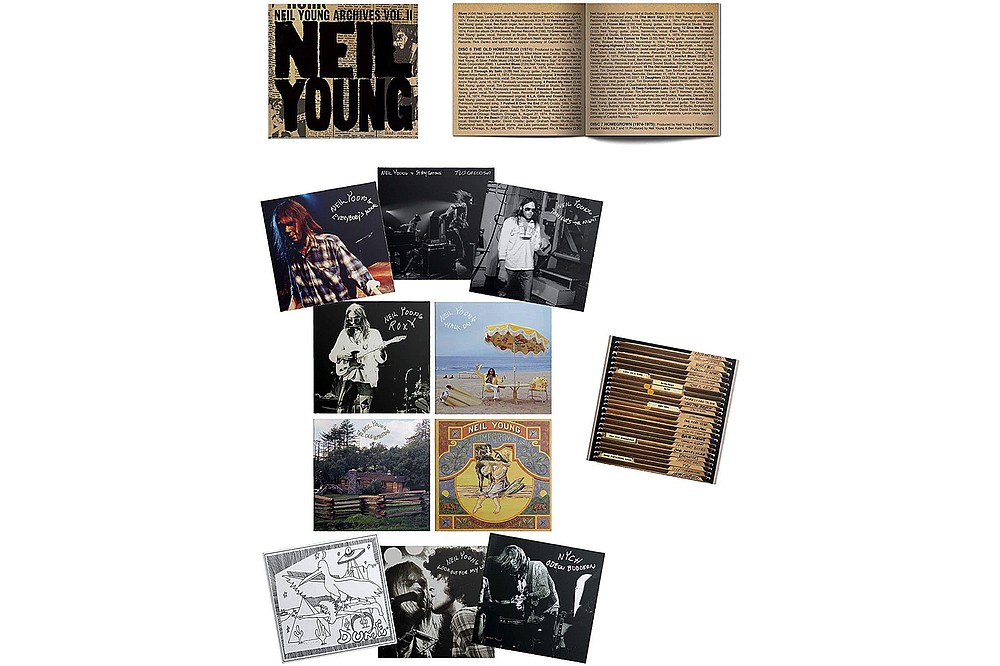 You might have expected a sequel to "Decade" sometime around 1986 or so, and there's some talk that one was even planned. But Young never followed up until 2009, when the digital revolution made possible the release of "Neil Young Archives Vol. 1: 1963–1972," which was the first salvo in a planned series of boxed sets of archival material.

"Vol. 1" was released in three different formats — a set of 10 Blu-ray discs that contained high-resolution audio along with video and visual documentation, a set consisting of 10 DVDs and a basic eight-CD set. It covered Young's pre-fame career in Canada and his work as part of Buffalo Springfield and Crosby, Stills, Nash & Young, as well as his solo work up to 1972's "Harvest."

Now "Neil Young Archives Volume II: 1972–1976" has finally been released. (Finally, because those who expect such things were pretty sure it was going to come out some time in the decade following the first set. "Volume III" is tentatively set to be released next year.)

Yet, as interesting as the marketing story is — and Young has exploited the possibilities of the internet and digital audio as cannily as any major recording artist, building a by-subscription empire with neilyoungarchives.com — the more interesting story may actually be the music collected in this set, which, as familiar as some of it might be to Young's core baby boomer demographic, is remarkable. Young's preference for leaving the tape rolling paid off decades later.

No matter how closely you've attended to Young's work over the years — and he has always been an artist who has winked at gray-market bootlegs of his work — there's plenty here that you likely haven't heard that's worth hearing.

Any Young fan will remember the artist's sardonic observation on "Decade" that "'Heart of Gold' put me in the middle of the road. Traveling there soon became a bore, so I headed for the ditch."

Well, that's the legend anyway. Young might not have become the acoustic strumming radio ready singer-songwriter that some at Reprise might have imagined him to be, but the period was a prolific one for Young, who was releasing too quickly for the label to keep up. (Which was one reason "Decade," originally slated to be released in 1976, was pushed back to late 1977; Young simply had to get "American Stars 'N Bars" — now widely viewed as one of his least impressive records of the '70s — to market first.)

"Volume II" is actually the shadow history of Young's artist peak. The albums he released between 1973 and 1975, the so-called "ditch trilogy" of "Time Fades Away," '74's "On the Beach" and "Tonight's the Night" (which was actually recorded in 1973 but not released until 1975) are all critically acclaimed records, even if they didn't produce another "Old Man."

Still, those impatient with the idea of Neil Young as a sui generis singer-songwriter of some depth would do well to avoid these sides. (My wife, Karen, who generally likes Neil Young, interrupted me while I was doing research for this piece to complain that the racket I was listening to was impressively "out-of-tune." When I told her it was Young, she just shook her head sadly.)

Anyway, the years '72-'76 were a dark time for Young; in November 1972, he fired his longtime friend and guitar foil Danny Whitten from Crazy Horse because Whitten's heroin addiction had made it impossible for him to keep up with the rest of the band. Whitten died that same night, probably as a result of mixing diazepam, which he was taking to get over a knee injury, and alcohol, which he was using to try to wean himself off heroin.

Then, in June 1973, Young's friend and roadie Bruce Berry succumbed to a heroin and cocaine overdose. Berry's tragedy was compounded by his having been introduced to heroin by Whitten. Anyone familiar with Young will remember that his 1973 album "Tonight's the Night" was an attempted catharsis recorded in the wake of these deaths. It was recorded at Los Angeles' Studio Instrument Rentals (SIR), where Berry had befriended Young before going to work for him and Crosby, Stills, Nash & Young (and later Whitten, who took him with him to England) and was managed by Berry's brother Ken.

But what "Volume II" reveals is that Joni Mitchell visited these sessions, inspiring Young and the band (called the Santa Monica Flyers for the session, with guitarists Ben Keith and Nils Lofgren, drummer Ralph Molina and bassist Billy Talbot) to join her on a loose-to-sloppy version of her "Raised on Robbery," which was soon to be released on her album "Court and Spark."

This is gold for fans and those who think they understand something about the complicated relationships of these two Canadians transplanted to Laurel Canyon. It's not great music, but it's a wonderful souvenir of a moment that wouldn't have survived were Young not both pack rat and control freak.

"Volume II" contains 12 songs that have never been released in any format, while 50 are previously unreleased versions of known songs. That means that another 77 are songs you might have on your hard drive somewhere (the "Homegrown" album, released in June, is included here, as are the live albums "Roxy: Tonight's the Night Live," which was released in 2018, and "Tuscaloosa," released in 2019).

And Young would have me remind you that you can always pony up and subscribe to neilyoungarchives.com — subscriptions start at $19.99 per year, and the "patron" level ($99.99 per yer) "includes unspecified perks."

My take is that, as befits a rock star, Young has always been more of a sonic force than a literary one — you know him by his tones and timbres. After Jimi Hendrix, Young might be the most influential rock guitar player ever, given to over-the-top aggression, a kid in love with the damage he can inflict.

But in the long run, he might be even better remembered as a remarkable entrepreneur, one who found a way to flourish even as album sales dwindled, streaming services paid scant royalties and a pandemic foreclosed most touring options. All you need to copy Young's business plan is a little musical genius, a compulsion to document everything and a time machine.