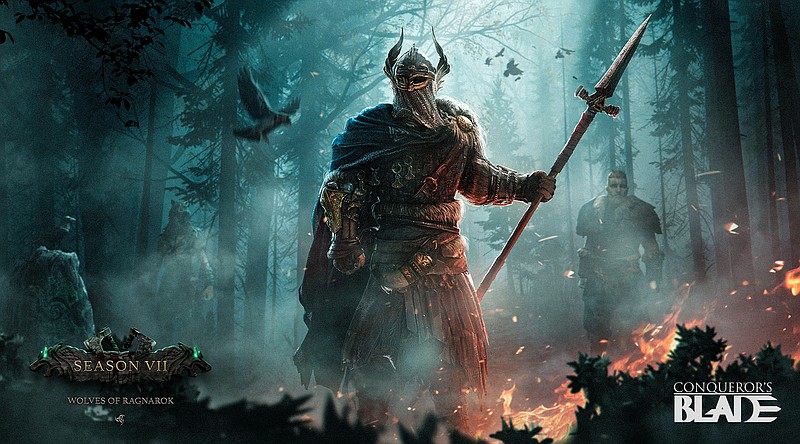 Are you a fan of epic medieval castle sieges, like the Battle of Helm's Deep in "The Lord of the Rings" or the fights in "Kingdom of Heaven"? If that's your jam (and it definitely is mine) then "Conqueror's Blade" is a game worth checking out.

Made by China-based developer Booming Games, "Conqueror's Blade" is a free-to-play, real-time strategy, massively multiplayer online game (aka MMO) that offers players a chance to be a battlefield warlord commanding an elite squad while taking part in epic battles.

"Conqueror's Blade" seems like a cross of several game genres, with the tactical army battles of games like "Total War" and "Mount and Blade."

The first step is to create your avatar in the game, a warlord who will wield one of 11 weapons, each of which has its own skill sets and combat styles. A robust early tutorial gives players the chance to try out 10 weapon types and pick the combat style that seems right for them. Some of the load-out options include a defense-focused sword and shield, an agility-focused spear, a glaive for sweeping attacks that hit multiple units at once, two kinds of bows and a slightly more modern musket-wielder. A powerful maul is also unlockable later on.

Your choice is not set in stone — you will receive decent gear that will last you for at least the first 30 or so levels, but it isn't difficult to switch gears later and go with a different combat style.

After character creation, players choose their starting units, with options such as archers, pike men and sword-and-shield users. These choices are also not permanent, as dozens of units are available.

[Video not showing up above? Click here to watch: arkansasonline.com/329blade]

Finally, players will choose what region of the map in which to spawn. The map region will determine which units are easily available to add to your ranks, and crossing the map into different territories is made fairly difficult. If you're going to play with friends, make sure everyone chooses the same server and same starting map location.

Most of the actual gameplay in "Conqueror's Blade" is through field and siege battles. A siege will consist of 15 vs. 15 players, with one side defending and the other attacking. If the defenders can hold off the invaders until time runs out, they win.

It's not just 30 players fighting, though. Each player also spawns with a troop of his or her choice, which can contain up to 40 soldiers. For those who are bad at math, that's more than 1200 units spawning at once.

Attackers spawn outside the castle and have a variety of siege equipment to help them get inside. Units can be commanded to operate siege equipment, such as siege towers and battering rams, and will slowly march them forward. Meanwhile, attacking players will call in trebuchet strikes and man cannons to take out enemy fortifications. Defenders are also using cannons, flaming arrows and teams of archers to whittle down enemy troops as they approach.

Once at the castle walls, ladders can be stood up as well, for troops to scale the walls. All this creates pitched, multi-front battles that make it difficult to just hole up in one spot.

Dying in sieges is not the end, however. Dead warlords respawn within a minute, and if soldiers have died, a new unit can spawn (players can bring a certain number of units to battle, usually four to five squads).

Even with so many units on the screen at once, "Conqueror's Blade" plays remarkably well, without much noticeable lag or frame-rate drops, and graphically it's superior to comparable titles.

All the things about the game — seasons, battle passes, cosmetics and the like, seem to pretty much be the industry standard these days, especially for MMO-style free-to-play games. But that's pretty standard. The game is free, giving it wider appeal and a larger player base.

The game has more than just battles. There's a whole economy with multiple currencies. There are player alliances and battles for control of resources. You can leave the city, venture out into the world and fight bandits or other players. Your guild will fight other guilds for territory and control of capitals.

IS IT PAY TO WIN?

I'm going to lean toward no, not really.

Some games are truly, blatantly play to win, and the only way to compete is to spend money. In this game, buying the season pass gives players more rewards faster, and it speeds up progression by about 30%, but there aren't any premium-locked units or warlords, and players who pay aren't simply more powerful in combat against other players.

There are also easily completed daily and weekly challenges, plus daily rewards for logging in that can really boost progress for free-to-play players.

One of the problems I had with the game — while there's a pretty robust tutorial system — is that a lot was left unexplained at the start. However, I also like to start games without knowing much, for a "fresh" experience.

There are plenty of YouTube tutorials and guides to explain the finer mechanics of the game, so my suggestion is to watch some YouTube videos or read some reviews.

There are a few persistent player complaints, such as the maul being overpowered. Its best feature is the ability to wreck troops that are bunched up together in a shield formation, which is normally resistant to enemy attacks; another virtue is that in one-on-one combat, one of the skills allows maul users to grab their opponent and throw them — which can be rough if you're fighting on top of a castle battlement.

Despite that, most players I fought didn't use the maul, so it's probably not that overpowered.

"Conqueror's Blade" is pretty grindy. It will take you a long time to unlock everything, especially if you're playing for free, but each season adds more content to the game.

You'll notice I didn't talk about the story; this isn't really the kind of game for that — you make your own story.

If this kind of game appeals to you, give it a whirl and download it. There's nothing to lose if it's not for you.